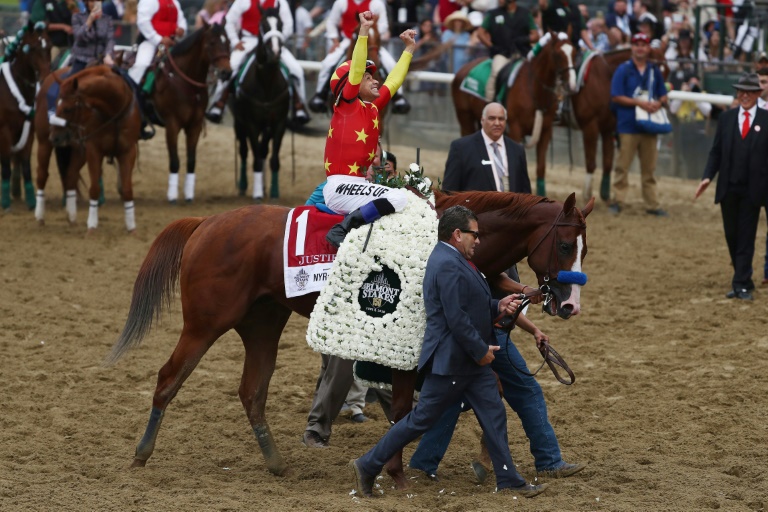 Jockey Mike Smith celebrates atop of Justify at the 150th running of the Belmont Stakes at Belmont Park on June 9, 2018 in Elmont, New York (Photo: AFP)

Justify became the 13th horse in history to win US racing's coveted Triple Crown with an electrifying triumph in the 150th Belmont Stakes on Saturday.

In adding the Belmont to his Kentucky Derby and Preakness Stakes victories, the unbeaten Justify made Bob Baffert just the second trainer to saddle two Triple Crown winners.

Drawn in the unfavorable first post, Justify burst from the gate under jockey Mike Smith and never trailed in the 1 1/2 mile race dubbed the "Test of the Champion".

"I can't describe the emotion that's going through my body right now," Smith said as he made for the winner's circle. "This horse ran a tremendous race. He's so gifted. He's sent from heaven."

Despite drawing the rail, Justify went off as a 4-5 favorite and more than lived up to his billing.

Hofburg, trained by Bill Mott and ridden by Irad Ortiz -- and reckoned by many as a contender to thwart Justify's Triple Crown bid -- was third in the field of 10.

Justify, unraced as a two-year-old, signalled his greatness with a Kentucky Derby victory on a rain-soaked Churchill Downs track in May.

He was the first horse since 1882 to win the Kentucky Derby without having raced as a two-year-old.

A sore heel a day after that victory raised brief concerns, but two weeks later Justify dug deep at fog-shrouded Pimlico to claim the 1 3/16-mile Preakness.

It was a narrow victory, and some feared the 1 1/2-mile Belmont would be a stretch too far for the big chestnut colt.

Instead, he powered to the front of the field on the sweeping Belmont track called "Big Sandy" and ran like a machine to the wire.

"This effort has reinforced our belief that America is a great place to do racing," said Teo Ah Khing, founder of the China Horse Club that is a co-owner of Justify.

After racing in WinStar Farm colors in the Kentucky Derby and Preakness, Justify bore the red and yellow of China Horse Club on Saturday.

Justify's Triple Crown feat came 45 years to the day after another physically imposing chestnut, Secretariat, broke from the first post and won the Belmont by a stunning 31 lengths to complete the Triple Crown.

"He's just brilliant," said Smith, who at 52 became the oldest jockey to win the Triple Crown. "Did you see him in the gate? He was standing so still.

"I actually thought maybe he's not going to break today. I mean, he left like he was going 440 yards in Ruidoso, New Mexico!"

Justify improved to 6-0 in a racing career that only began on February 18. The only other unbeaten Triple Crown winner was Seattle Slew in 1977.

Seattle Slew's Triple Crown -- four years after that of Secretariat, was swiftly followed by Affirmed's in 1978.

But it would be 37 years before the Baffert-trained American Pharoah would become the 12th Triple Crown winner in 2015.

As the drought dragged on, Baffert had reason to know how hard it was to achieve the feat. Three times -- in 1997, 1998 and 2002 -- he brought horses to the Belmont that had won both the Kentucky Derby and Preakness, only to see them falter.

Now he has joined Jim Fitzsimmons, who conditioned Gallant Fox in 1930 and Omaha in 1935, as the only trainers to saddle two Triple Crown winners.

"It's just amazing," said Baffert, his voice hitching. "It's very emotional for me."

Baffert admitted that the sweet-natured American Pharoah will "always be my first love" but said Justify richly deserved his star's status.

"I wanted to see that horse's name up there," Baffert said. "We knew he was brilliant from day one."