CULTURE Kaiser crashes, Hanley and Herta out of Indy 500

Kaiser crashes, Hanley and Herta out of Indy 500 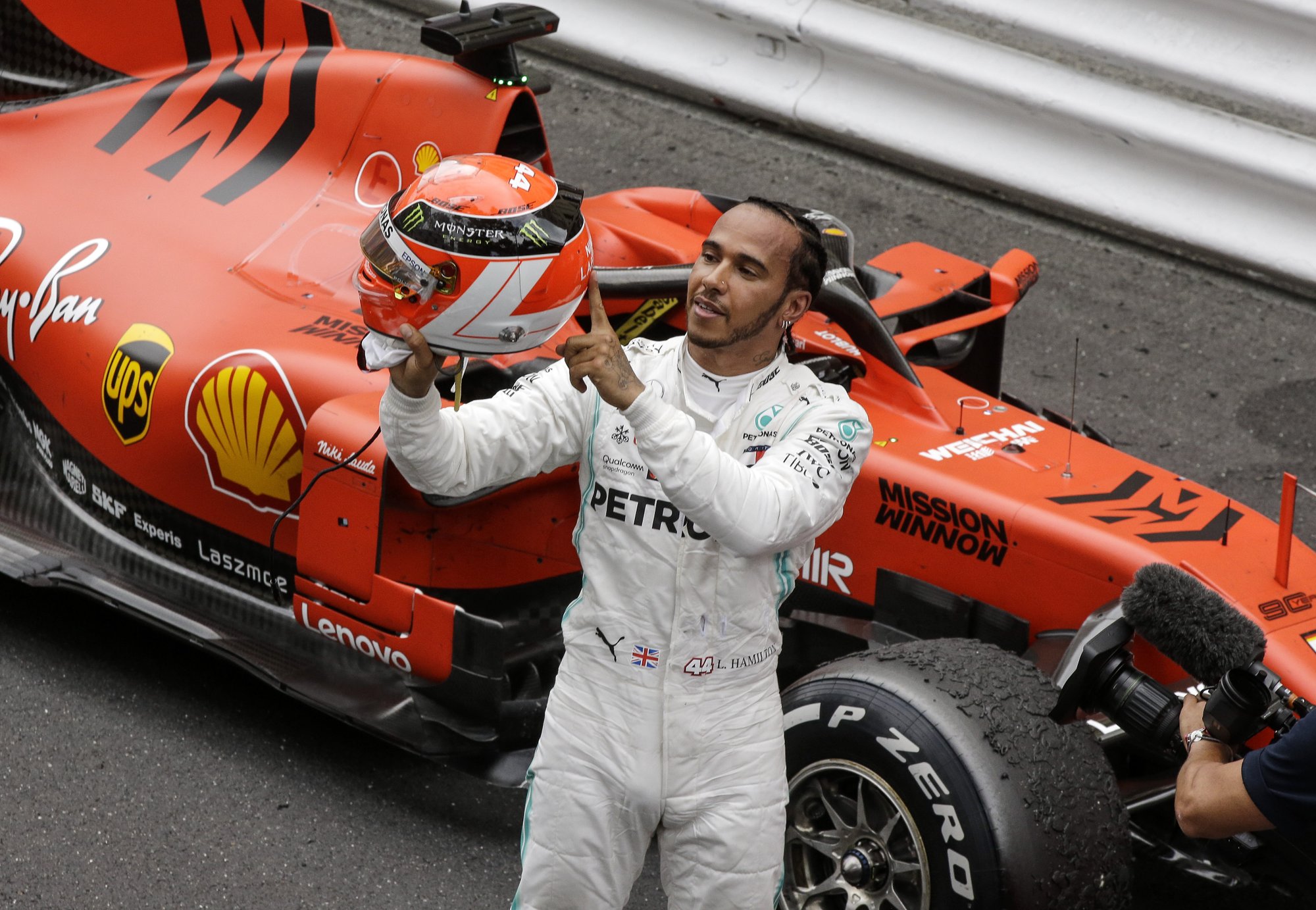 Mercedes driver Lewis Hamilton of Britain holds his red helmet to tribute Niki Lauda after he won the Monaco Formula One Grand Prix race, at the Monaco racetrack, in Monaco, May 26, 2019. (Photo: AP)

Kyle Kaiser of feel-good story Juncos Racing has brought out the caution flag in the Indianapolis 500 after spinning in Turn 4 and hitting the outside wall.

Kaiser was in a higher line with Sage Karam below him and went up the track, hitting the outside wall.

The wreck came moments after Jordan King locked up entering the pits and slid into his right-front tire changer. The pit crew member was helped over the wall and checked by medical staff.

Rookies Ben Hanley and Colton Herta are already out of the race.

Hanley slowed abruptly as he detected a suspension problem before navigating his way across the 2.5-mile oval and into pit lane. The DragonSpeed team’s crew replaced the tires and sent him back onto the track but one tire was not spinning and the crew ended up pushing him back into the pit box.

Herta was the first driver out of the race. He was towed in with a gearbox problem after completing just four laps of the 200-lap race.

The Brazilian damaged Team Penske’s No. 3 car while the incident spun Davison sideways and sent a tire bouncing across pit lane. Davison’s crew pushed the car back into the proper pit box.

Pole winner Simon Pagenaud and defending race winner Will Power, both teammates of Castroneves, continued to hold the top two after 45 laps of the 200-lap race. 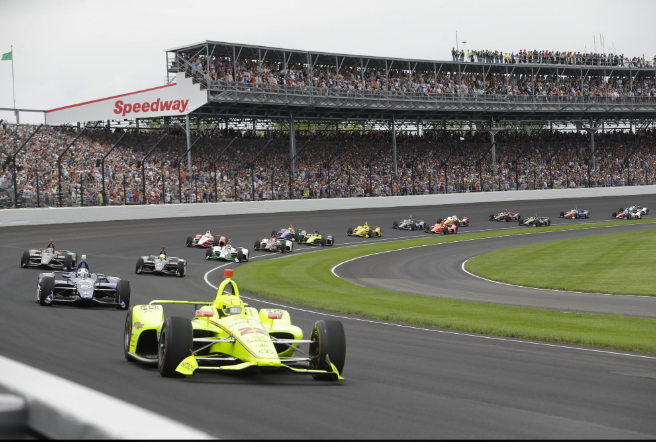 Simon Pagenaud, of France, leads the field through the first turn on the start of the Indianapolis 500 IndyCar auto race at Indianapolis Motor Speedway, May 26, 2019, in Indianapolis. (Photo: AP)

Rookie Colton Herta is the first driver out of the Indianapolis 500.

The 19-year-old Herta started fifth in Sunday’s race for Harding Steinbrenner Racing and hopes were high for the young driver who won at Texas.

But a gearbox problem on the fourth lap ended his day early, and he has now failed to finish any of the four races since he found victory lane.

The Indianapolis 500 has begun on time amid concerns rain might impact the 103rd running of the showcase race.

Colton Herta’s car rolled to a stop with smoke billowing out from the back of his car after just six laps, bringing out the first yellow flag of the race.

Mario Andretti celebrated the 50th anniversary of his only Indianapolis 500 win by receiving a new trophy: the baby Borg-Warner, which each 500 winner receives today.

When Andretti won in 1969 the baby Borg was not part of the tradition. Instead, the winners received a plaque with a photo of the winning car. Andretti’s oldest son, Michael, remembers his father hanging the plaque on an office wall in the family home.

After Mario Andretti was honored with a parade lap in a convertible just before Sunday’s race, Michael Andretti presented his father with the trophy — one Mario Andretti said he would cherish.

Team Penske is off to a winning start this weekend after Scott McLaughlin captured back-to-back SuperCars races in Australia, and Fabian Coulthard made it a 1-2 finish in Sunday’s race.

The duo has combined to win six straight and 12 of 14 in the series this season.

At Indianapolis Motor Speedway, Simon Pagenaud is on the pole for team owner Roger Penske in Sunday’s Indy 500. Josef Newgarden is in Row 2, defending winner Will Power is in Row 3 and three-time winner Helio Castroneves is in Row 4.

At Charlotte Motor Speedway, Joey Logano will roll off seventh in the Coca-Cola 600. Ryan Blaney will start 19th and Brad Keselowski will start right behind him in 21st.

Lewis Hamilton has won the Monaco Grand Prix to extend his Formula One championship lead over Mercedes teammate Valtteri Bottas.

Hamilton was under constant pressure from Red Bull’s Max Verstappen but held on. Verstappen picked up a five-second time penalty earlier, so he was bumped down to fourth place behind Bottas in third and Ferrari’s Sebastian Vettel in second.

Drivers wore red caps a minute’s silence was held before the race in memory of three-time F1 champion Niki Lauda, who died on Monday at the age of 70.

One of the heartwarming stories of the Indy 500 is that of tiny Juncos Racing and young driver Kyle Kaiser, who bumped mighty McLaren from the field on a shoestring budget and without a primary sponsor.

Upon hearing that last part, more than 20 fans donated $100 apiece earlier this week to help fund the effort. Touched by the sentiment, the team then allowed them to sign the left side of the car in black Sharpie, just behind where Kaiser sits in the cockpit. Those signatures were left even after Juncos Racing landed a couple of corporate backers this past week.

“It’s awesome,” Kaiser said with a bright smile Sunday. “Might make the left side of the car a little heavier, though.”

Kaiser is making his second Indy 500 start. He dropped out with a mechanical problem just past the halfway point in last year’s race.

Ferrari driver Charles Leclerc is out of the Monaco Grand Prix.

He punctured his right rear tire, sending carbon debris from his shredded tire onto the track, after a bold overtaking move backfired early in Sunday’s race. Leclerc tried to get past Nico Hulkenberg’s Renault on the outside heading into the La Rascasse turn, one turn after making the same move to overtake the Haas car of Romain Grosjean.

The incident prompted a safety car to come out as debris was removed. Leclerc retired from his hometown race on lap 19 of 78.

Drivers profited from the safety car to come into the pits for new tires and as they emerged, there was a near miss as Max Verstappen’s car was released too soon and he almost hit the Mercedes of Valtteri Bottas. Verstappen was under investigation by race officials.

Lewis Hamilton has made a good start from pole position at the Monaco Grand Prix.

The defending Formula One champion had little trouble holding position heading into the first turn at Sainte Devote.

Mercedes teammate Valtteri Bottas and Red Bull’s Max Verstappen were unable to find a gap to squeeze through on the narrow 3.3 kilometer (2-mile) street circuit.

Starting from 15th place on the grid after Ferrari bungled his qualifying on Saturday, home favorite Charles Leclerc jumped up a couple of places in the first five laps.

Drivers are wearing red caps with Niki written on them ahead of the race in memory of Niki Lauda.

The three-time F1 champion died on Monday at the age of 70, less than one year after a lung transplant.

Lauda, who suffered third-degree burns and lost most of his right ear after being rescued from a burning car at the German GP in 1976, was hugely popular in F1. He often stood out when walking around the paddock with his distinctive red cap on.

Further tributes were to be held for Lauda with a minute’s silence at 2:53 p.m.

Fans watching from the stands and those on yachts in the harbor were also encouraged to express their support.

One of the busiest days in motorsports will get underway on the French Riviera.

Formula One kicks it all off with the Monaco Grand Prix on Sunday, when the dominant Mercedes team will look for a sixth straight win this season. The Silver Arrows are well placed to do so with defending F1 champion Lewis Hamilton on pole position and teammate Valtteri Bottas second on the grid.

Ferrari is struggling — again — with Sebastian Vettel starting from fourth and Charles Leclerc down in 16th after a baffling strategical team error during qualifying.

Simon Pagenaud starts from the pole for the Indianapolis 500 in a car owned by Roger Penske, who is celebrating the 50th anniversary of his first race at Indy. Penske has won the 500 a record 17 times, and has defending race winner Will Power in his stable.

The field is the tightest in Indy 500 history based on qualifying speeds from first to 33rd.

William Byron starts up front at the Coca-Cola 600 after becoming, at 21 years old, the youngest driver to capture the pole for NASCAR’s longest race. Aric Almirola will start second with defending race champion Kyle Busch in third.