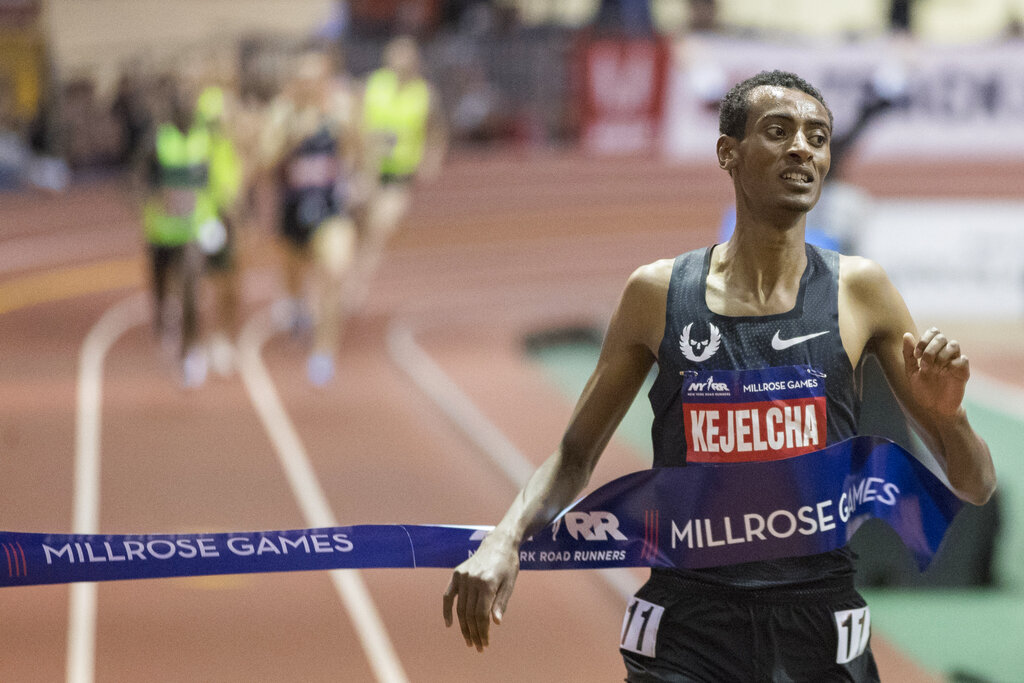 The Ethiopian star just missed the record of 3:48.45 set by Hicham El Geurrouj's in 1997 in Ghent, Belgium.
"I'm very happy," Kejelcha said through an interpreter. "I was very inspired when I was running and I think it allowed me to feel that way."
Kejelcha spoke about his desire to break El Geurrouj's record leading up to the race. He said he looked up at the video screen after crossing the finish line and realized immediately he had not broken the mark.
"I came very close to it and I know I'm going to try to get it," Kejelcha said. "I think I can break it."
Edward Cheserek was second, and Calyton Murphy finished third.
Konstanze Klosterhalfen won the women's mile in a German-record 4:19.98 in her first trip in New York.
"When I came to New York I was very overwhelmed because it's such a big city," Klosterhalfen said. "To come here to this indoor track I had confidence again because it's a great atmosphere and also loud. I heard nothing because it was so loud and amazing."
Jamaica's Kemoy Campbell collapsed while leading after 1,000 meters in the 3,000. Campbell was treated by emergency services personnel on the track for approximately 20 minutes before being taken to a medical facility.
Michael Saruni won the 800 in 1:43.98, with Donovan Brazier finishing second in an American-record 1:44.41. Ajee Wilson won the women's race in 1:58.60.
"It's always a homecoming when I'm here. The crowd really makes me feel welcome," Wilson said. "The surface is great and on top of that, the way the track is built all the energy, all the noise, all the noise the fans (make) you feel it and encourages you. It makes you want to run harder."
Olympic champion English Gardner took the women's 60 in 7.10, and Sharika Nelvis won the women's 60 hurdles in 8.01.
Taylor Ewert won the women's USATF championship mile race walk in a high-school record of 6:28.21. The 17-year old from Beavercreek, Ohio, set the previous record of 6:45.68 last year. Vashti Cunningham, the daughter of former NFL quarterback Randall Cunningham, won the women's high jump at 6 feet, 4 3/4 inches.