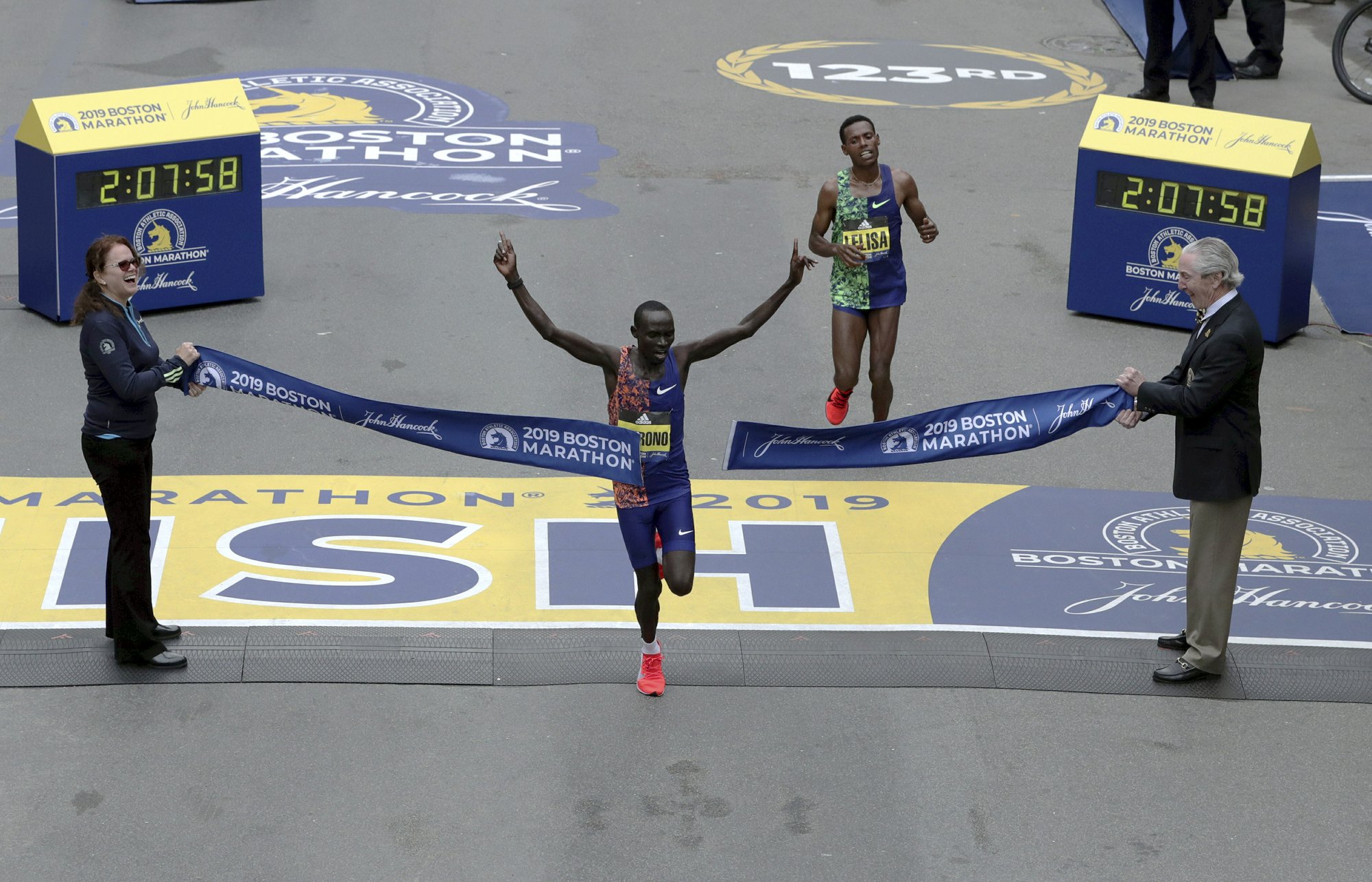 Lawrence Cherono, of Kenya, breaks the tape to win the 123rd Boston Marathon in front of Lelisa Desisa, of Ethiopia, right, on Monday, April 15, 2019, in Boston. (Photo: AP)

The two-time Boston Marathon champion turned onto Boylston Street with a sliver of a lead, leaning in front of two others with the finish line in sight.

But one of them was Lawrence Cherono, the fastest man in the field.

And he needed every bit of his speed.

Cherono outkicked Lelisa Desisa and passed him just steps away from the tape, winning the 123rd Boston Marathon in 2 hours, 7 minutes 57 seconds on Monday to claim his first major victory.

Desisa, the Ethiopian who won the 2013 race that was marred by the finish line bombing and claimed a second victory in ’15, eased up after realizing he was beaten and finished 2 seconds back. Kenneth Kipkemoi was third, another 8 seconds behind, one of seven Kenyans in the top 10.

Worknesh Degefa broke away from defending champion Des Linden and the rest of the women’s pack in the Framingham flats and ran alone for the last 20 miles to her first major marathon victory.

The 28-year-old Ethiopian finished in 2:23:31 to become the eighth Ethiopian woman to win the race and the third in seven years. Kenya’s Edna Kiplagat was second, American Jordan Hasay was third and Linden was fifth. 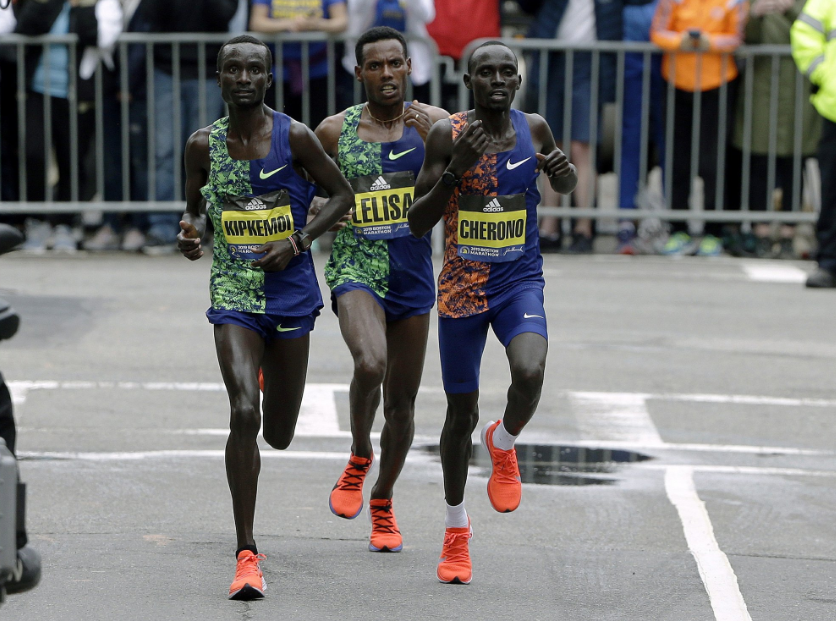 Kenneth Kipkemoi, left, of Kenya, Lelisa Desisa, center, of Ethiopia, and Lawrence Cherono, right, of Kenya, compete in the final mile of the 123rd Boston Marathon on Monday, April 15, 2019, in Boston. (Photo: AP)

One year after an icy rain and a near-gale headwind resulted in the slowest winning times in four decades, race organizers again prepared for the foul New England weather. But overnight thunderstorms moved on before the runners left Hopkinton; the sun even made an appearance about halfway through.

Linden took advantage of last year’s storm to splash her way to the first win for an American woman since 1985.

But with conditions back to normal, so were the results: East Africans from Kenya and Ethiopia dominating the podiums.

A field of 30,000 runners followed the elites, ditching their trash bags and ponchos on the Hopkinton Green before embarking on the 26.2-mile trek from Hopkinton to Copley Square. It’s the first time the race has been run on April 15 since the 2013 attacks; officials planned a ceremony at 2:49 p.m. to honor those killed or maimed by the two pressure cooker bombs that exploded near the finish line.

Daniel Romanchuk, 20, became the youngest-ever men’s wheelchair champion in Boston. He finished in 1:21:36 for the fastest time ever for an American.

Manuela Schar won the women’s race for the second time, adding it to her titles in in Berlin, Chicago, New York and Tokyo. If she wins in London in two weeks, she will have swept the World Marathon Major series. 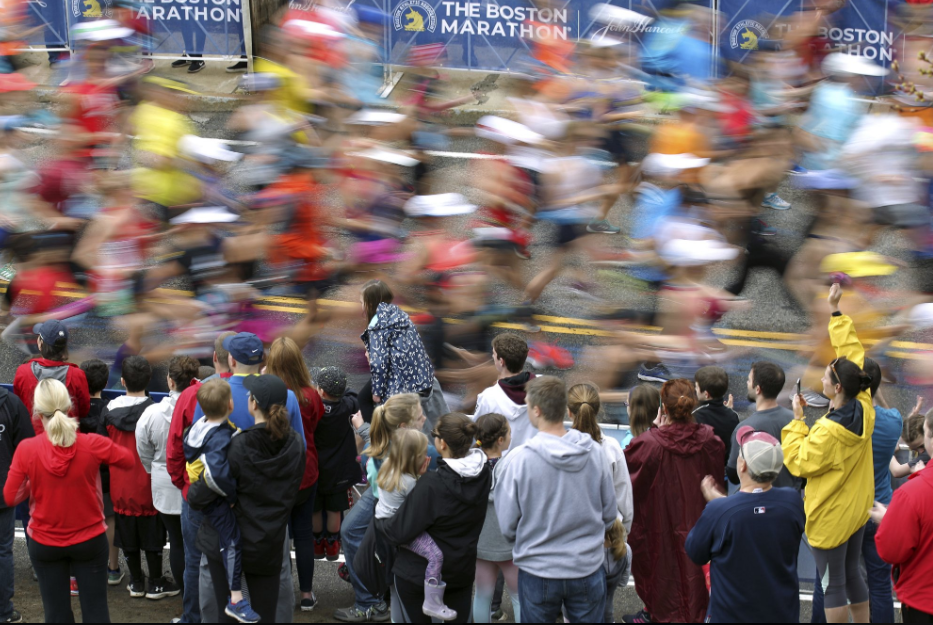 Fans cheer on the third wave of runners at the start of the 123rd Boston Marathon on Monday, April 15, 2019, in Hopkinton, Mass. (Photo: AP)