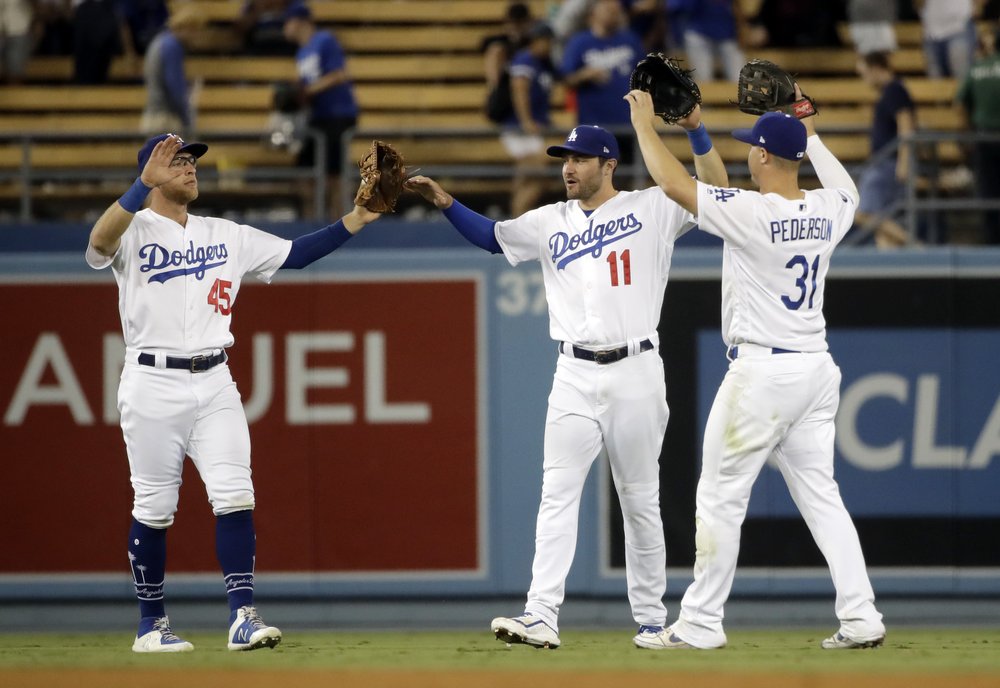 As good as he felt last week in Miami striking out 10 in seven scoreless innings, Clayton Kershaw felt equally as bad back home at Dodger Stadium.

Still, Kershaw navigated his way through six innings to pass Sandy Koufax for most wins by a Dodgers left-hander and Los Angeles routed the Toronto Blue Jays 16-3 Tuesday night.

“It’s special,” said Kershaw, who at the same time is loath to consider the big picture when it comes to his career achievements. “All the historical stuff is for me to look back on when I retire. I’m not too focused on that, but try not to take it for granted.”

Kershaw (13-2) earned his 166th career victory, breaking a tie with Koufax for fifth on the club’s wins list. He allowed three runs and six hits — including two homers by rookie sensation Bo Bichette. He struck out six and walked three.

“I was pretty bad, so thankful we scored that many runs,” Kershaw said. “You just got to compete. Try to focus on the next pitch as best you can. It’s not going to look pretty at times.”

Dodgers rookie Will Smith hit a go-ahead, two-run homer in the third inning — one of five by the National League leaders who have hit 223. Cody Bellinger notched his NL-leading and career-high 100th RBI of the season, driving in three with a double that extended the Dodgers’ lead to 8-2 in the fourth. He was thrown out at third to end the inning and walked off as fans chanted, “MVP! MVP!”

Bellinger was all smiles after getting caught at third, and not just because of the MVP chants — his pants fell down as he slid.

“That was funny,” he said. “The belt didn’t even break. My pants just fell, don’t even know how.”

Bellinger is the first Dodger to reach the century mark since Adrian Gonzalez had 116 in 2014.

Pitching on Lakers Night, Kershaw allowed a homer to — of all people — Derek Fisher while falling into a 2-0 hole. But the Dodgers backed their eight-time All-Star with four double plays and slugged five homers while pounding out 15 hits.

Los Angeles broke out for five runs with two outs in the third to get the blowout going.

A.J. Pollock hit a solo shot, Smith followed with his 11th homer and Corey Seager added a two-run double in the third that chased Sean Reid-Foley, who entered in the second after Buddy Boshers served as the opener.

“If you walk people and against a good lineup like that, you’re going to pay the price,” Toronto manager Charlie Montoyo said.

Max Muncy added a solo shot, his 32nd, in the sixth off Justin Shafer, who then issued consecutive walks to Smith and Bellinger. That set up Chris Taylor’s three-run blast to left, giving the Dodgers a 12-3 lead.

Taylor came off the injured list earlier in the day after being out since July 15 with a broken left forearm.

Kiké Hernandez also returned from the IL after being out since July 29 with a sprained left hand. He was 1 for 5 with two strikeouts.

The Blue Jays ran through six pitchers before sending newly called up shortstop Richard Ureña to the mound in the eighth. That’s when the Dodgers tacked on four more runs, extending their lead to 16-3. Taylor had an RBI single before Joc Pederson’s three-run homer.

Bichette hit his first career leadoff homer in the first and did it again leading off the sixth against Kershaw, giving the 21-year-old rookie his first career multihomer game. He has seven homers through 21 career games.

He’s also just the sixth player with multiple homers off Kershaw in the same game.

“Being at Dodger Stadium, facing Kershaw, I was pretty amped up,” Bichette said. “I’ll always remember this day. It’s a pretty cool thing. You can talk about him as being one of the best ever.”

Vladimir Guerrero Jr. returned to the Blue Jays’ lineup after dealing with left knee inflammation since last weekend. He had a pair of singles and two walks.

Dodgers: INF Kristopher Negrón went on the 10-day IL with neck stiffness. ... OF Alex Verdugo (strained oblique) is still having pain and hasn’t resumed baseball activities in Arizona. He won’t return until at least Sept. 1. ... LHP Rich Hill (strained flexor tendon) will throw a bullpen session this week. He’s been out two months.

Anthony Davis tossed out the first pitch on Lakers Night. The Laker Girls cheered him on from the third base line while he threw a strike to Dodgers closer Kenley Jansen.