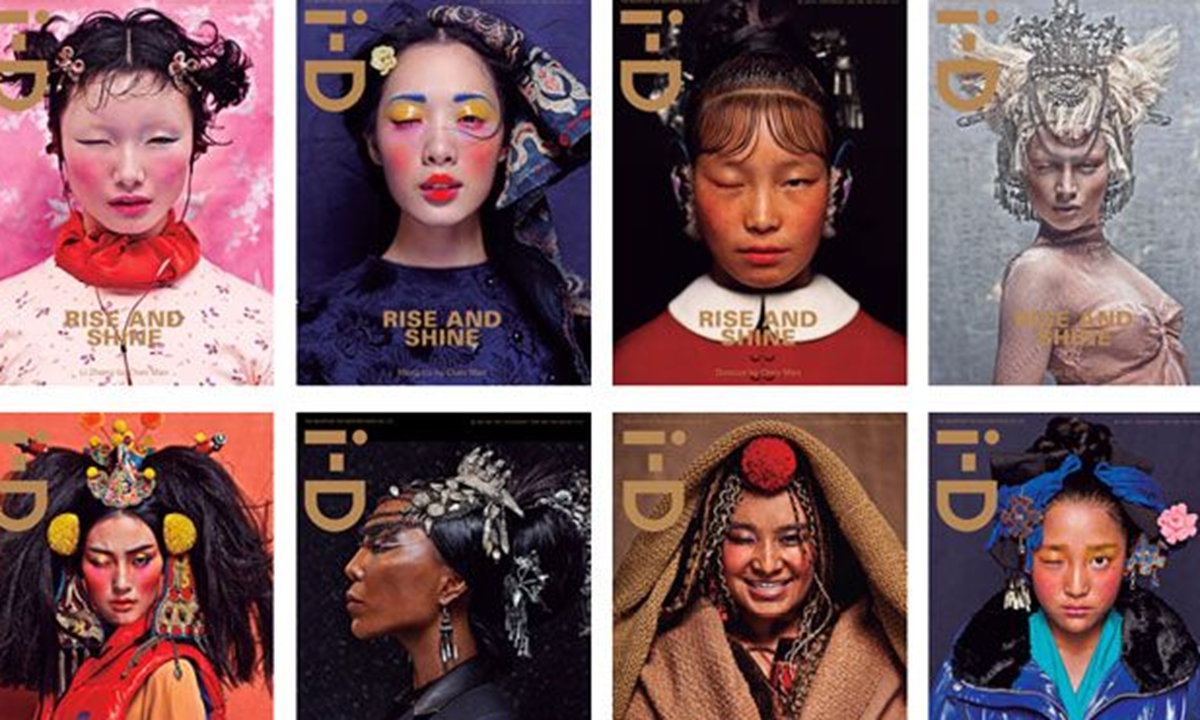 Chinese well-known photographer Chen Man has once again entered the spotlight after a photo for a Dior exhibition sparked controversy among Chinese netizens, many of whom claimed it is "deliberate sweet talk" for Western stereotypes about Chinese people.

The photo is on display at a fashion exhibition for the French brand that opened at the West Bund Art Center in Shanghai on Friday. The photo shows a model with single eyelids and dark skin dressed in traditional Chinese clothing and holding a Dior bag.

The photo quickly sparked discussion as some said it was feeding into Western stereotypical images of Chinese, while others applauded the work for its departure from the fair skin and large eyes that are considered the typical standards of beauty in China.

The photo is a clear call back to an earlier work from Chen called "Whatever the Weather." Shot in 2012 for a special edition cover of British fashion magazine i-D, the work is comprised of 12 photos of women from China's various ethnic groups dressed in stylish modern takes on traditional clothing winking at the camera.

Some netizens took note of this, and soon the set began circulating on Chinese social media. The viral photo has further triggered criticism from Chinese social media review site Douban to the Twitter-like Sina Weibo with critics again saying the models play into Western stereotypes about Chinese.

Some netizens, however, argued that they don't think Chen's work is a deliberate play into Western stereotypes, as the photos are images of ordinary Chinese women from the country's various ethnic groups and thus reveal a comprehensive image of the people of the country.

"There are beautiful models with big eyes and there are those without," said one netizen.

The Global Times has been unable to reach Chen for comment.

Apparently due to the controversy surrounding the photos, Dior pulled its original post of the new photo from Sina Weibo on Sunday.

The photos also sparked a discussion of the different approaches that are taken when it comes to marketing in China and the rest of the world.

"When it comes to city publicity or brand promotion in the European market, photos usually go with an image of calmness, elegance and nobility. So why do we have to use the image of ordinary people, even one with ugly makeup on, when it comes to Chinese models?" wrote one netizen.

Some netizens posted images as examples of this contrast: In World War II, the image of a brave, calm, elegant, beautiful, and fashionable British woman produced in the UK became such a classic that it has been passed down till today.

"Dior and Chen Man themselves should also highlight the same appearance of Chinese women, but they failed to do that," wrote one netizen.

Some insiders in the fashion industry say that this issue has nothing to do with artistic and cultural differences, but it reflects the same situation behind the creation of the image of Fu Manchu, positioning Chinese imagery as insignificant and insidious.

This is not the first time a controversial marketing campaign has rocked Chinese fashion circles.

In June, similar criticism also appeared during a graduation fashion show at the Academy of Arts & Design, Tsinghua University, where one of the graduates' runway shows featured models with eye makeup deliberately done to make models' eyes appear lengthened.

This also shows that makeup decisions are related to identity and education of the creator and involve a common problem in Chinese fashion circles when it comes to aesthetics, a lack of self-confidence, said fashion insiders.

Chen grew up in Beijing. Both her grandfather and her mother were doctors. Chen studied at the China's Central Academy of Fine Arts and then set up her own studio after graduation. She has shot cover photos for celebrities such as Chinese mainland actress Fan Bingbing and Taiwan actress Brigitte Lin.