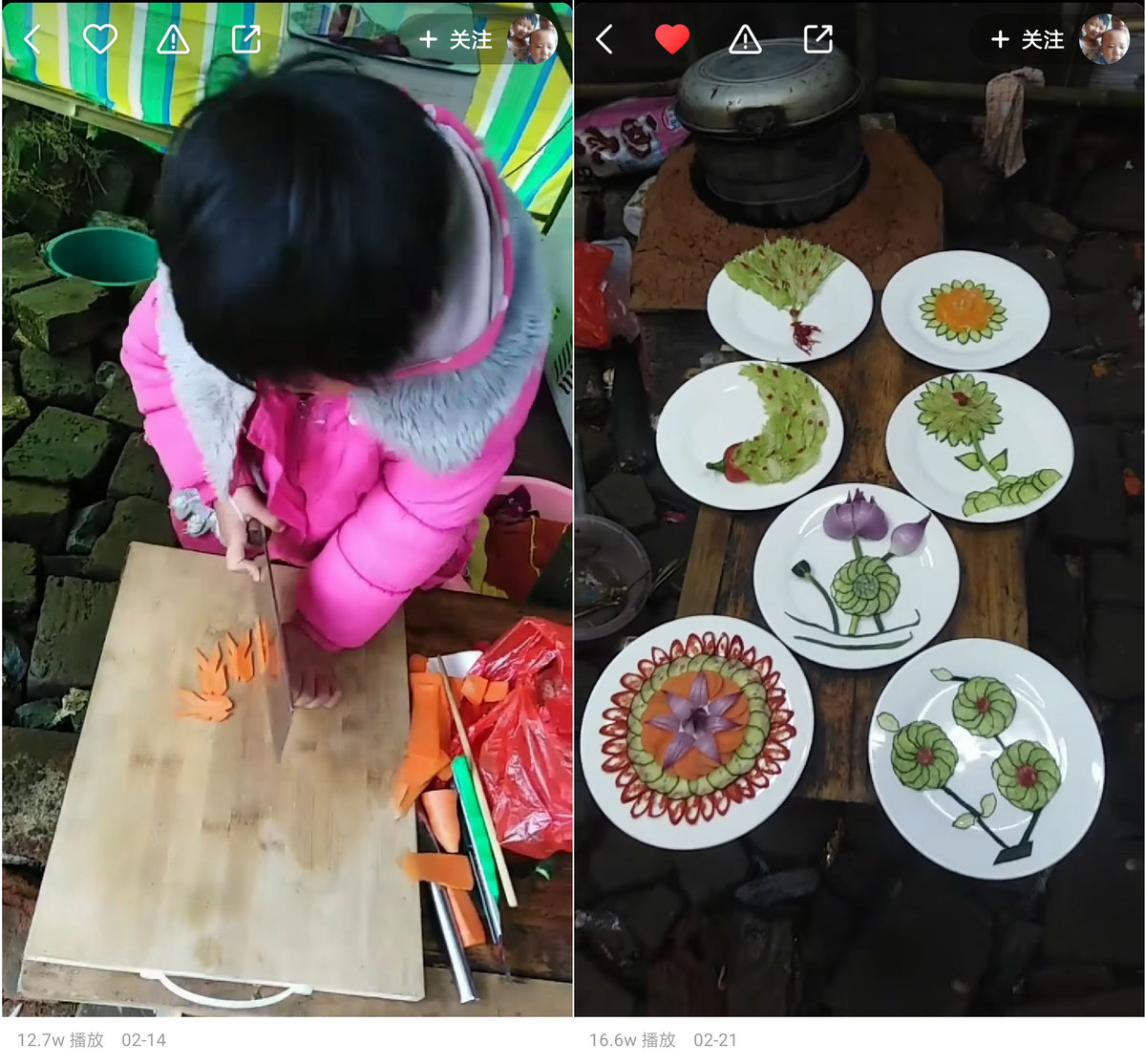 Left: Six-year-old Liu Limei cuts carrot into the shape of a swallow. Right: The food carving works made by Liu. (Photo: China Daily)

While most 6-year-olds enjoy meals prepared by their parents, Liu Limei has already become a social media sensation at that age, thanks to videos showcasing her impressive skills in cutting food with a Chinese cleaver.

Highly skilled with a blade, Liu is not just proficient in cutting fruits and vegetables into perfect cubes or slices. In the videos posted online since February, she can even make artistic food carvings.

A carrot can be cut into the shape of a swallow and flowers. A stick of celery can be turned into a dress. A lotus flower and leaf could be made from parts cut from purple onion, eggplant and cucumber. The little girl uses the cleaver like a magic wand to turn normal fruits and vegetables into beautiful plates.

To date, more than 40 of her works of edible art have been shown on Kuaishou, a popular short-video sharing platform, where she has gained over 389,000 followers online.

However, the lovely works of art have a heartbreaking background.

Liu used to live in a normal family in Xinshi township, Leiyang city, Central China's Hunan province. Her father Liu Guocheng and mother had run two restaurants in the town. She also has a younger brother named Liu Gongzheng.

Curing the boy led to the family's savings nearly running out, with new debts continuing to pile up. In the face of these expensive medical costs, the mother made the heartbreaking decision to escape from the family on Aug 17, 2017, and she gradually cut off contact with them.

The situation got even worse in April 2018, when Liu Limei herself was also affected by Henoch-Schonlein purpura in her kidneys, a disorder that affects blood vessels and usually improves without treatment.

The daughter dropped out of kindergarten. Their house was sold, but they still owed 200,000 yuan ($29,110) to others. The father plunged into deep despair.

Sensible of the difficult situation they were in, Liu Limei, then 5, began helping her father take care of her brother in the ward. To comfort her only remaining parent, she often said, "Dad, don't be upset. We will listen to you and work hard to pay back the debt when we grow up."

During the past two years, the broken family has lived in a temporary dwelling found through Liu's aunt. To take some of the burden off her father, Liu started helping out with household chores when she was only 4 years old. The father also strived to find a way out of the family's difficult situation as he took his children to the hospital and farmed.

Following the advice of a grocery clerk, the father started to post short videos about his two sick children on Kuaishou since July 4, 2018. At first, his videos did not attract much attention.

One day in the beginning of 2019, the father stumbled on his daughter's talent in cooking. Liu Limei copied her father and cubed the carrot. Then he taught his daughter how to chop food through his own guidance and online videos. The little girl soon could chop, dice, mince and carve food like a pro.

Since then, Liu Guocheng has begun to share online his daughter's food-cutting videos, which have taken off in popularity.

A number of commenters were amazed at how skillful a young girl could be in using a cleaver and plating fruits and veggies, with one saying she was "like a master chef. An adult can't even do that." Some expressed a lot of sympathy for the girl and her family. One of the highly liked comments said, "When some kids have just learned how to eat by themselves, other kids have already learned how to cook for the family."

Some viewers took action to help them. Clothes, shoes, toys and snacks were sent to Liu's home. Two large-scale charitable donations have been held online to help with the children's treatment costs, and more than 800,000 yuan has been raised.

With the help of these kindhearted people, Liu Limei will return to kindergarten. She was also kind enough to say, "When I have enough money, I would change another house for my little brother, one where there are no rats." Given the hot and humid summer, the family has moved to a simple bamboo house built by Liu's father where rats and snakes are frequent visitors.

However, Liu is still too young to understand everything surrounding her social media sensation and she just seemed to have a lot of fun showing her fancy knife skills before the camera. But her father understands that such a sensation will not go on forever and he only wants it to last as long as possible to bring more help to the distressed family.