Aleksandar Kolarov said Serbia "won't be doing the maths yet" after his brilliant second-half free-kick grabbed a 1-0 victory over Costa Rica, with the Balkan side drawing first blood in their World Cup group in Samara on Sunday.

The Roma defender made the crucial breakthrough early in the second half with a magnificent effort, and although Serbia missed chances to further extend their lead, they were not overly troubled by the Costa Ricans.

The win puts Serbia in a strong early position in Group E ahead of games against Brazil and Switzerland as they look to reach the last 16 for the first time since becoming an independent country, while Costa Rica have it all to do to repeat their surprise run to the quarter-finals four years ago.

"To score, I had it in a corner of my mind, but I especially wanted us to play as a team," said Kolarov.

"It's very important that we have these three points in the bag, but it's not over, Switzerland will be the hardest match.

"I don't want to do the maths for now, if we draw it would not work, we want to win of course."

His experienced side were solid throughout, with 23-year-old Lazio forward Sergej Milinkovic-Savic a constant threat.

"I'm happy with the way we played, but we have to keep our feet on the ground," said Krstajic, who only took charge last October. 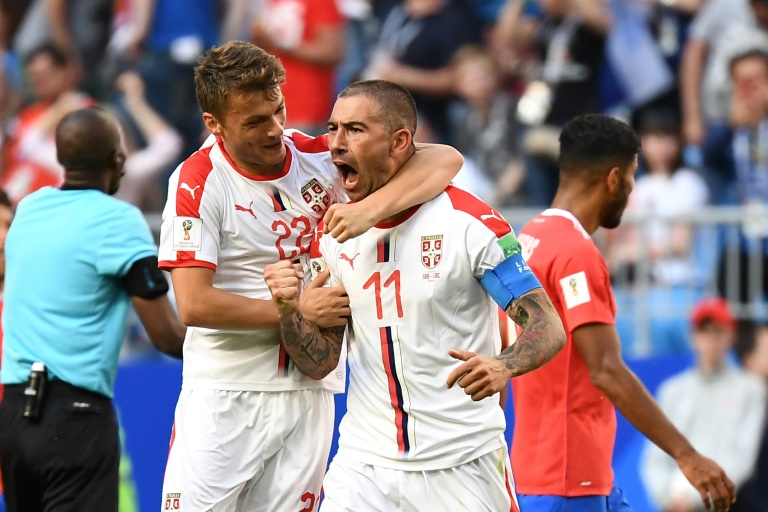 "There was pressure on the players, I too felt the pressure, it was my competition debut at the head of the national team, but I like to take responsibility."

Costa Rica started brightly, with Vladimir Stojkovic diving to save at the feet of Marcos Urena, before Giancarlo Gonzalez headed straight at the Serbia goalkeeper.

The Central Americans should have taken the lead in the 12th minute, but Bologna defender Gonzalez inexplicably headed over when unmarked at the back post with the goal at his mercy.

Serbia grew into the game and started to dominate possession, with Costa Rica playing in the same style which brought them so much success in 2014, sitting deep and looking to pounce on the counter-attack.

Milinkovic-Savic, whose non-selection during qualifying led to Slavo Muslin's sacking as Serbia coach, almost broke the deadlock on the stroke of half-time, but his overhead kick was well kept out by Real Madrid 'keeper Keylor Navas in the Costa Rica goal.

Serbia did take the lead in the 56th minute, though, and in fine style.

The 32-year-old Kolarov fired a sublime left-footed free-kick over the wall, dipping into the top corner past a despairing dive from Navas.

Campbell's speed almost got him in behind the Serbia defence just seconds after coming on, but it was Serbia who blew a gilt-edged chance to score a second.

Dusan Tadic's low cross picked out Filip Kostic, but the substitute miskicked in front of an open goal, perhaps due to a slight touch on the ball by Navas.

There was a late scuffle as Nemanja Matic tried to take the ball off a member of the Costa Rican staff on the sidelines, before a VAR red-card review saw Aleksandar Prijovic booked for a separate incident, but Serbia held on with relative ease for a potentially priceless win.