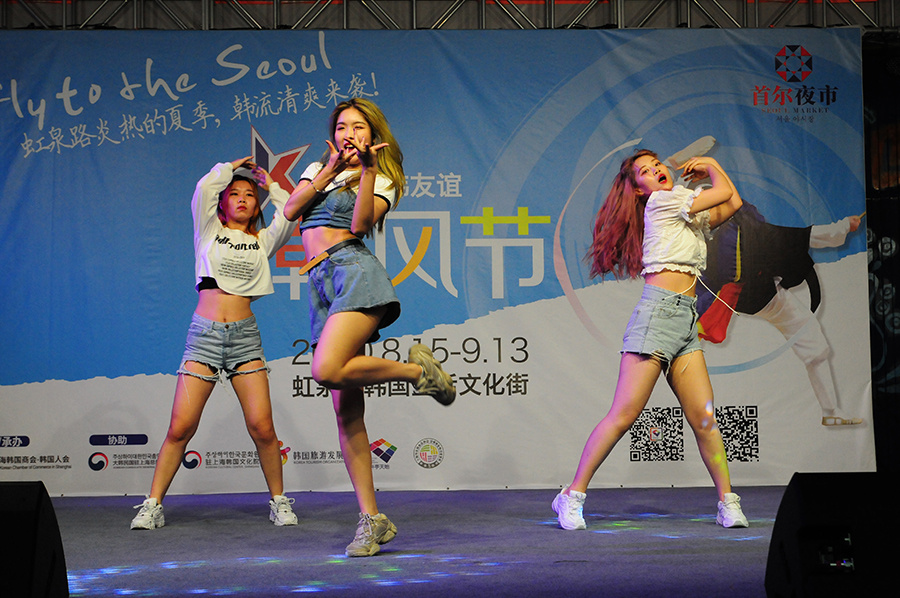 The beating of drums and fluttering of colorful flags heralded the arrival of a group of young people dressed in hanbok, traditional Korean clothing, as they marched into the Jingting Tiandi Plaza in Shanghai on Saturday.

As the formation stopped in the central square, and loud applause rang out from the crowd gathered around, a month-long China-Korea Friendship Cultural Festival started.

Located on Hongquan Road, the plaza hosts dozens of open air restaurants featuring Korean food, such as chimaek (fried chicken and beer) and kalbi (Korean BBQ). Not surprisingly, it is known to locals as the "Korean Street".

"Good evening, everybody! I hope you have fun at the fair!" Park Sang-yun, chairman of the Korean Chamber of Commerce in Shanghai, announced in fluent Shanghai dialect, to the large crowd.

"Because of the COVID-19 pandemic, Korean businesses here have suffered and we want to revive the lively scene now the coronavirus has been controlled in China, and add more cultural elements to the street," he says.

On the central stage, the program started with a traditional Korean drum performance, followed by a K-pop dance routine, and then a concert of traditional Chinese instruments. 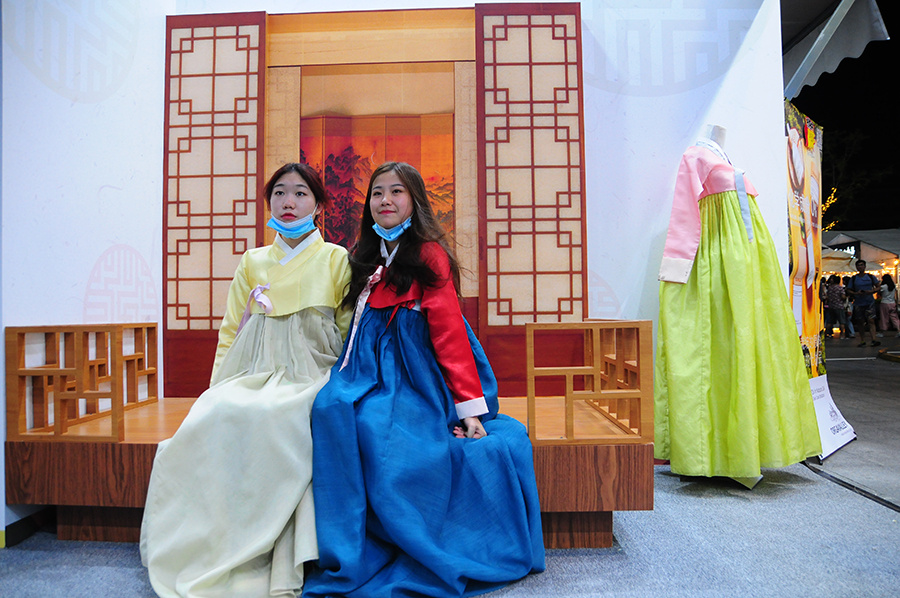 Visitors try on Korean style hanbok at the event.

Around the stage, several temporary booths were set up, selling Korean products, such as cosmetics and souvenirs, and showcasing Korean culture and services.

The Korean Cultural Center of Shanghai organized a series of activities that are taking place from Aug 15 to Sept 13.

On Saturday, visitors were encouraged to try on hanbok and take photos against the background of a traditional Korean home.

The center says an exhibition of kimchi and other traditional Korean food will open during the second week of the festival, followed by a traditional handcraft experience program and a Taekwondo introductory class as it draws to a close.

Kim Hong-soo, director of the center in Shanghai, says: "We want to introduce Korean culture to Chinese people to enhance exchanges and understanding between the two nations as we will celebrate the 28 anniversary of the establishment of diplomatic ties between China and South Korea on Aug 24."

Kwag Kab-yeal, chief representative of Daegu municipality in Shanghai, says, "Our city is known as the 'medical capital of Korea' and we welcome more Chinese tourists to Daegu to experience our services, as well as the beautiful scenery after the pandemic."