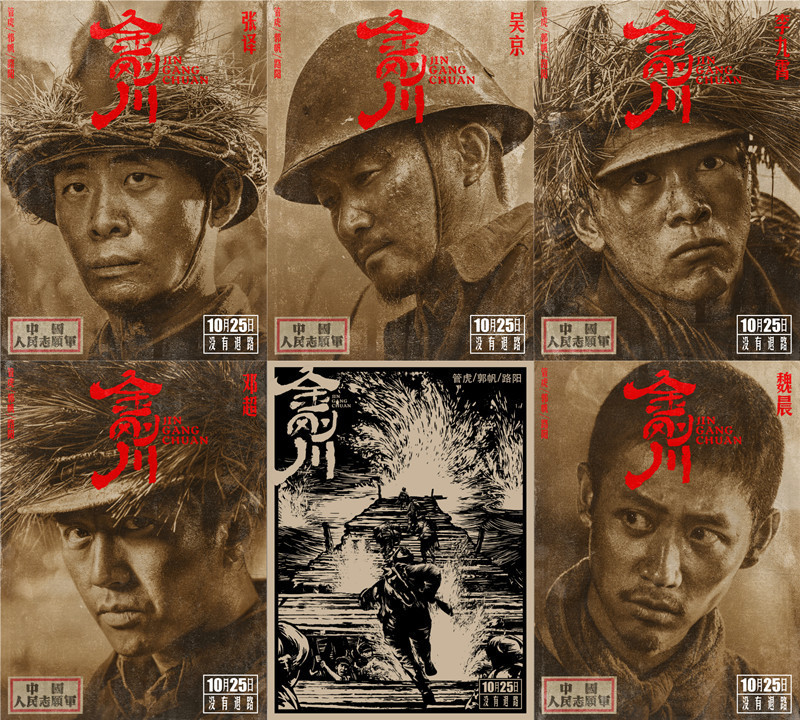 A combination of a set of posters of "Jin Gang Chuan," revealing the main cast. (Image courtesy of Maxtimes Culture)

A new set of posters unveiled the star-studded cast, including actor-and-director Wu Jing who is known for his "Wolf Warriors" series -- the second installment of the military action franchise is still the highest-grossing Chinese film of all time, grossing 5.69 billion yuan ($834 million). Other leading actors include Zhang Yi, Deng Chao, Li Jiuxiao and Wei Chen.

The film is co-directed by three different directors: Guan Hu, director of critically-acclaimed "Mr. Six," took Chinese war films to another level with his recently released war epic "The Eight Hundred," which had grossed nearly 3 billion yuan by Thursday and become the most successful Chinese film of the year so far; Frant Gwo, director of the highest-grossing sci-fi epic "The Wandering Earth"; and Lu Yang, who earned his reputation for his wuxia masterpiece "Brotherhood of Blades."

The Korean War broke out in June 1950. China joined the war when a multinational force led by the United States crossed the 38th parallel between North and South Korea, bringing an imminent threat to China. The People's Volunteer Army joined the war that October, allied with the DPRK to secure the safety of the newly-founded People's Republic of China.

"Jin Gang Chuan" tells a rarely-heard story from the Korean War and is designed to be a popular patriotic film to inspire the Chinese people on the 70th anniversary of the war. The producers include China Film Co. Ltd., Seventh Art Pictures, Huaxia Film Distribution Co, and Alibaba Pictures.

Shooting started at the end of July and wrapped up on Sept. 20. According to sources close to the production team speaking to China.org.cn, they have dealt with a lot of pressure, challenges, tight schedules, and bad weather along the way to meet the deadline. This means close cooperation, precise arrangements and stunning speed in filming were implemented during the filmmaking. Quite fitting for a film with the slogan on the posters, "There's No Turning Back."