The story of Lady Xu Mu, who is considered a patriotic heroine and was the first female poet recorded in Chinese history, has been adapted into a Kunqu Opera production by the Northern Kunqu Opera Theater.

On Sept 27 and 28, the Kunqu Opera production, titled Guo Feng, was staged at Tianqiao Theater in Beijing. Guo Feng is a combination of two Chinese words, guo referring to country and feng meaning demeanor. The title of the show delivers the spirit of Lady Xu Mu, who loves and is devoted to her country. 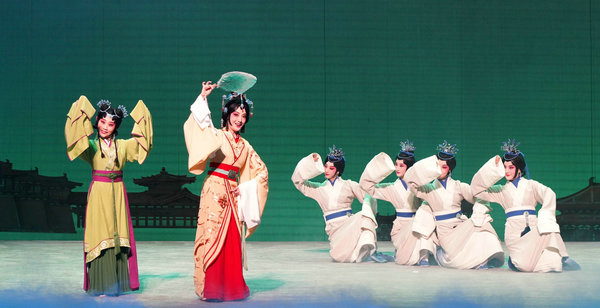 During the Spring and Autumn Period (770-476 BC), Lady Xu Mu was born into a royal family of the Kingdom of Wei. After marrying the king of the Xu Kingdom and moving to the remote kingdom, Lady Xu Mu expressed her homesickness by writing poems. When she heard the news that the Kingdom of Wei was defeated in a war, she decided to go back to help rebuild the Kingdom of Wei. She also wrote poems to express her love and devotion to her homeland.

Veteran scriptwriter Luo Huaizhen, who has been working with the Northern Kunqu Opera Theater for about 25 years, adapted the story of Lady Xu Mu and interpreted through the 600-year-old Kunqu, which is known for slow-paced melodic singing, poetic verses and graceful movements.