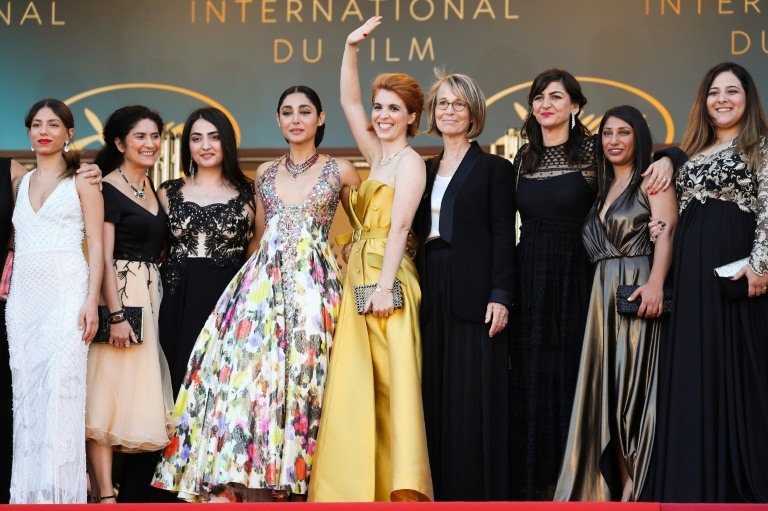 A stirring film about Kurdish women fighters taking on Islamic State jihadists sparked a furious row between critics at the Cannes film festival Sunday, with some being accused of misogyny.

"Girls of the Sun", which follows a platoon of Yazidi women battling the extremists who had enslaved them and their children in Iraq, was premiered at the same time as one person was killed and four others wounded in a suspected jihadist knife attack in Paris.

The movie, with Iranian star Golshifteh Farahani as a lawyer who picks up an AK47 to lead the Sun Brigade of survivors, is set in Kurdistan in the days leading up to the November 13 Paris terror attacks, in which 130 people died.

The premiere followed a historic protest on the Cannes red carpet Saturday by Hollywood stars and female filmmakers demanding equal pay and an end to sexism.

But as the curtain came down, a shouting match erupted at a nearby screening for critics.

A small number who had booed the film were shouted down by others, who accused them of disrespecting the film's female director and cast.

"It's not about you, dude. Not your time to talk," one said.

The divide was equally stark in the first reviews published Sunday, with the French magazine Telerama calling the war film "naive and inconsequential", while others said it was a "disservice to a noble cause".

But IndieWire's David Ehrlich said it was impossible not to be moved by the film, calling it a "surefire Palme (d'Or) contender", referring to the festival's top prize.

He conceded there "was a little too much paprika on the sandwich... but (French director) Eva Husson is one hell of a filmmaker."

French producer Claudine Nougaret Depardon took to Twitter to condemn the "misogynous and condescending attitude to this beautiful and courageous film.

"Let's fight to demand the early retirement for these (male) critics," she added.

The Guardian's Peter Bradshaw also rallied to its defence, hailing it as a rousing "feminist war movie: impassioned, suspenseful, angry".

While admitting that some might find it naive and "unsophisticated... for me it is heartfelt, forthright and muscular."

But several French critics excoriated Husson's handling of the story, arguing that some of the women characters were paper-thin.

Husson herself later told AFP that "all the films that I adore divide people. A film with a strong point of view has to divide people, there is no point in being consensual" about such a subject.

The director, who carried her four-year-old son, Gaspard, into the premiere, described the work as an ode to the female fighters' staggering courage.

She insisted that a powerful scene in which one of the women gives birth fleeing IS could never have been "done by a man in the same way".

It tells the story of a Tunisian family torn apart when their son runs off to join IS in Syria. The filmmaker said the birthplace of the Arab Spring has also sent more young men to join the ranks of Islamic State than any other country.