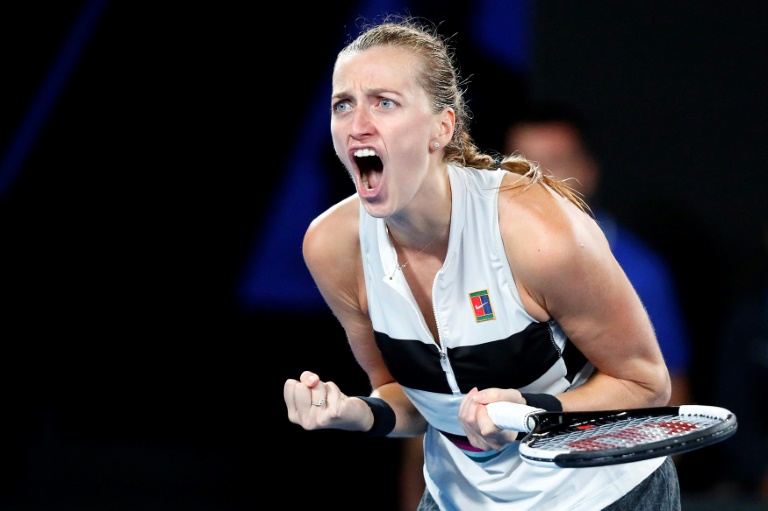 Australian Open finalist Petra Kvitova hailed the end of her Grand Slam bad luck -- and of a two-year transition following a knife attack that almost ended her career.

Having played only two Grand Slam quarter-finals since her Wimbledon triumph in 2014, Kvitova joked last year that she might as well quit playing at the top four events.

This year's Australian Open offered a different picture of the left-handed Czech who did not lose a single set on her way to the final in which she lost to Japan's Naomi Osaka in three sets on Saturday.

"I guess it's a compensation for last year which wasn't the best when it comes to Grand Slams," added Kvitova, who in 2018 reached the last-32 phase at the French and US Open, bowing out of the Australian Open and Wimbledon at the first hurdle.

"I wasn't too happy after the loss but now the positive things prevail," said the new world number two.

"I felt very well throughout those three weeks I played in Australia."

Kvitova started the year poorly at Brisbane where she lost in the last 16, but she took the top honours at Sydney a week later -- at a tournament where she initially was not expecting to play.

Besides the on-court battles, Kvitova is fighting memories of an attack at her Czech home by a knife-wielding burglar in December 2016, which left deep scars on her left hand.

She identified the man and is willing to give her testimony in court in early February on the condition she does not meet the suspect.

"Petra takes this as an inevitable thing. She knows it's necessary to put an end to the whole affair," her spokesman Karel Tejkal told reporters.

Kvitova herself declined to speak about the attack that required a complicated surgery and saw her sink from sixth to sixteenth in the world.

"Such questions make me a bit angry but I can't do anything about it. But it will be over some day."

"I guess this trophy is a chequered flag on those two years," Kvitova said, looking at the silver plate she won at Melbourne.

One of those to ask her was former world number one Jim Courier -- on court, following her quarter-final win against the home crowd's favourite Ashleigh Barty.

"I suppose he didn't want to make me cry -- but he did," Kvitova said.

"The interview was pretty tough -- but he's a nice guy."

Sympathy poured in from the Australian audience and from fellow players.

"Simona Halep sent me three nice messages -- after the Sydney win, after the quarter-final with Ashleigh Barty and after the final," said Kvitova.

"It's great to have such good relationships even when you're at the top of the rankings."

If Kvitova had won at Melbourne, she would have replaced Halep as the world number one -- an honour that went to Osaka instead.

"We didn't talk about the rankings with Simona," chuckled Kvitova, adding it was not her top priority.

"I'm trying to improve as the games go and I think the rankings will reflect that," she said.

Next, the 'Czech Lioness' faces a defence of last year's titles from St Petersburg this week and Doha a fortnight later.

"I'll enjoy St Petersburg, I'm travelling with my friend. It's a wonderful tournament and I'm looking forward to it," she said.

Asked if she was concerned about her health which has often been an issue in the past, she said: "I know it will be cold at St Petersburg but I'll wear a winter jacket and a woollen cap!"