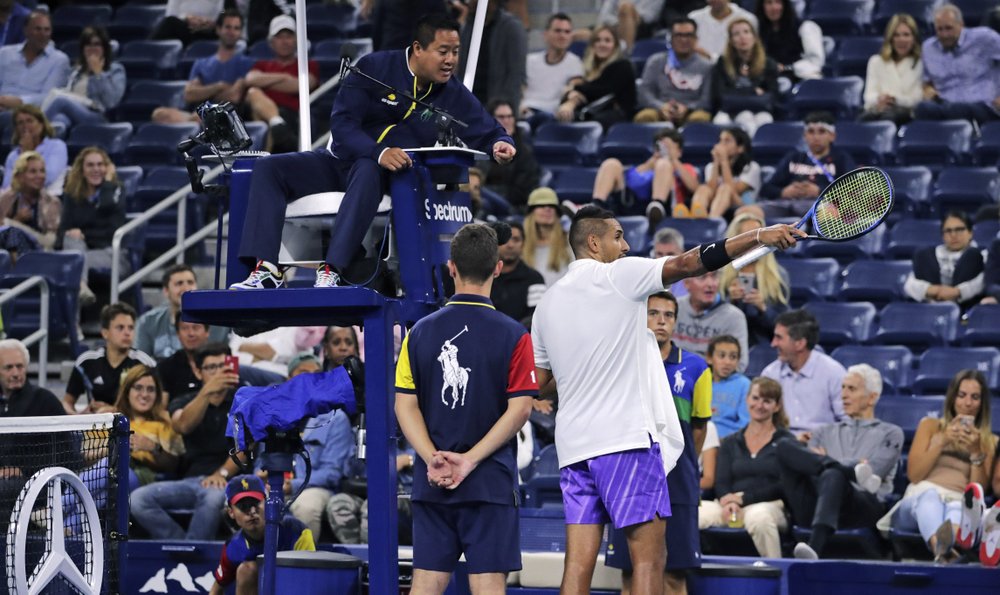 Nick Kyrgios, of Australia, points out distractions in the crowd during his match against Steve Johnson, of the United States, during the first round of the US Open tennis tournament in New York, early Wednesday, Aug. 28, 2019. (Photo: AP)

The ATP is considering whether to punish Nick Kyrgios for a “major offense” after he called the men’s tennis tour “corrupt” because it fined him more than $100,000 for his behavior during a match last month.

A tour spokesman issued a statement Wednesday saying that Gayle Bradshaw, the ATP’s executive vice president for rules and competition, would determine what to do about Kyrgios’ comments made at the US Open.

The 2019 ATP Rule Book says a “major offense” may be punished by a fine of up to the amount of prize money won at a tournament and a suspension of up to a year.

About a half-hour after the tour’s statement, Kyrgios sent out a Tweet in an effort “to clarify my comment around the ATP being corrupt,” saying “it was not the correct choice of words” and explaining the “intention was to address what I see as double standards rather than corruption.”

Speaking to a small group of reporters after his straight-set victory over Steve Johnson in the first round at Flushing Meadows ended after 1 a.m. on Wednesday, Kyrgios was asked about whether the recent fine affected him mentally as the year’s last Grand Slam tournament began.

“Not at all. ATP’s pretty corrupt, anyway, so I’m not fussed about it at all,” Kyrgios said.

It is the latest in a long list of clashes with tennis authorities for the 24-year-old Australian, who is seeded 28th at the US Open.

He was defaulted from a match at the Italian Open in May after throwing a chair during a match and was suspended by the ATP in 2016 for not trying to win and insulting fans during the Shanghai Masters.

At the Western & Southern Open in Cincinnati this month, Kyrgios insulted a chair umpire and left the court to smash two rackets during a second-round loss. The next day, the ATP listed a breakdown of eight fines ranging from $3,000 to $20,000 each, for violations such as unsportsmanlike conduct, verbal abuse and audible obscenity, with the total penalty reaching $113,000.

In the wee hours of Wednesday, when a follow-up question was asked about his “corrupt” comment, Kyrgios said: “Why are we talking about something that happened three weeks ago, when I just chopped up someone (in the) first round of US Open?”

More than 10 hours later, in his tweet, Kyrgios wrote: “I know my behavior at times has been controversial and that has landed me in trouble, which at times is granted and valid but my issue is around others ... doing the same or similar behavior and not being sanctioned.”

He added: “To be clear I know I’m not perfect and do not pretend to be and I acknowledge I’ve deserved fines and sanctioning at times but I expect consistency and fairness with this across the board (and) to date that’s not happened.”