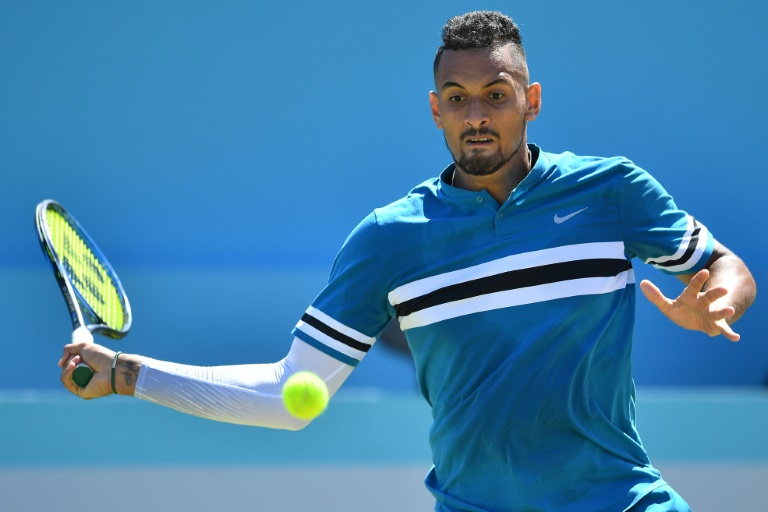 Nick Kyrgios blasted 32 aces for the second successive match as the brash Australian powered into the Queen's Club semi-finals with a 7-6 (7/5), 7-6 (7/3) win over Feliciano Lopez on Friday.

Kyrgios ended Lopez's reign as Queen's champion with his latest astonishing display of big-serving at the Wimbledon warm-up event.

The 23-year-old also hit 32 aces in his second round victory against Kyle Edmund, setting a personal-best for a three-set match.

Kyrgios needed only two sets to reach that mark against Spanish veteran Lopez as he set up a semi-final showdown with top seed Marin Cilic.

It is the sixth time in his career that Kyrgios has served over 30 aces, with his highest total coming when he blasted 37 in his famous Wimbledon upset of Rafael Nadal in 2014.

The world number 21 now has a tournament-leading 82 aces in his three matches at Queen's this week.

"I can't really remember a specific time where I've served at this level back to back," Kyrgios said.

"I didn't expect to serve the way I did yesterday, but I just found my rhythm early again in this match."

Asked for the secret of his serving success, Kyrgios revealed he rarely practises the shot, preferring to let the aces come naturally.

"I will never, ever go out on the practice court and hit serves just for the sake of hitting serves," he said.

"I always play points out of the hand and maybe roll my arm over maybe five, ten times and that's it.

"It was my best shot. I always based my game around it. It was one shot where I didn't really practice much at all.

"I guess just one day it started winning me easy points. I was, like, this is better than running!"

Cilic is no slouch when it comes to the power serves and the Croatian remains on course for a fourth Queen's final after winning his battle of the former champions against Sam Querrey.

The 29-year-old was beaten by Lopez in last year's final, but against Querrey it was business as usual for Cilic.

Having buried Fernando Verdasco and Gilles Muller in a barrage of aces, the world number six dismissed fifth seed Querrey with the minimum fuss.

Cilic had won all five of his previous encounters with Querrey, including a semi-final success en route to the Queen's title in 2012.

The Croatian also got the better of Querrey in the Wimbledon semi-finals last year and once again he was too powerful for the American.

Cilic, who finished as Australian Open runner-up in January, is running into form on grass just in time for Wimbledon, where he suffered an injury-plagued final defeat against Roger Federer last year.