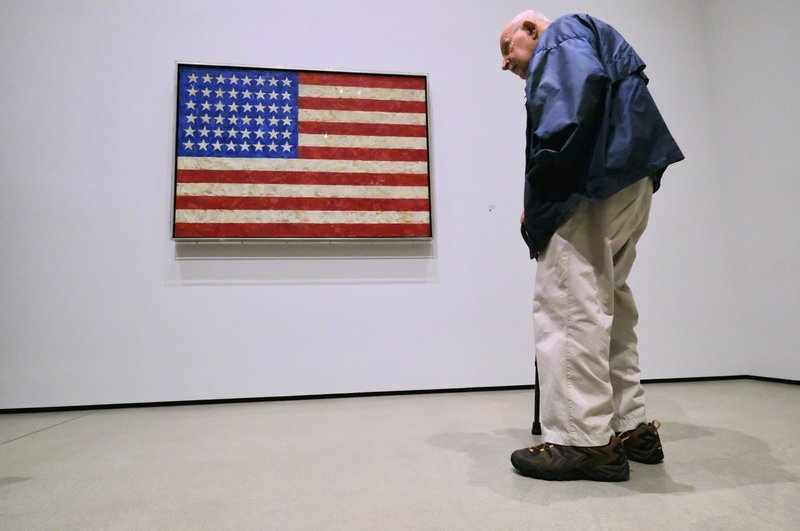 Jasper Johns’ decision more than 60 years ago to paint a picture of an American flag launched what became one of the most heralded artistic careers of modern times.

So it’s fitting The Broad’s latest exhibition, “Jasper Johns: Something Resembling Truth,” begins with a first-floor gallery filled with nearly a dozen of Johns’ most celebrated U.S. flag paintings.

From there, the exhibition goes on to display more than 100 other works, filling gallery after gallery and ranging from paintings and drawings to bronze and metal sculptures to an array of stunning multimedia creations.

The works span more than six decades and compose what Broad officials say is one of the largest retrospectives assembled for the 87-year-old artist, whose work helped launch the pop art movement and later merged it with conceptualism, abstract expressionism and other forms.

“It is well-known that Jasper Johns changed the 20th century artistically,” Broad curator and director Joanne Heyler said before leading a media tour through the exhibition this week. “Johns helped move the conversation of art to a new and exciting place by rejecting the established style of the time, the gestural bravura of abstract expression.”

The exhibition was put together with loans from dozens of museums, private collectors and the artist himself. Although Johns, who lives in Connecticut, hasn’t seen it and museum officials don’t know if he will, Broad co-curator Ed Schad says the artist was intimately involved in its assemblage.

“We sent him a full wooden model of our museum with everything to scale, everything placed, then we went to Sharon, Connecticut, and met with him and worked with him to finalize the exhibition,” he said. “I would absolutely love it if he came to see it.

It opened Saturday and runs through May 13.

Like Andy Warhol, Ed Ruscha and other contemporaries, Johns took art in a different direction in the 1950s and early ’60s with his decision to focus on intricately detailed, finely crafted interpretations of everyday objects.

Although best-known to the general public for his flag paintings and drawings, his other prominent works include numerous interpretations of bull’s-eye-like targets, sculptures of everyday things like numbers and flashlights, painted copies of cross-hatched etchings he saw on a passing car, and stunning mixed-media paintings with the cans, brushes and other objects he used in their making attached to them.

Prominent among the several mixed-media works on display are 1964′s “The Watchman,” an acclaimed abstract painting that has a partial manikin seated upside-down in an attached chair. Another, “Field,” includes a red neon light and other letters and items attached to an oil-on-canvas creation.

Sculptures from Johns’ own collection include his bronzed flashlights and slices of “bread.”

“I wanted to make a 3-D format that would sit on a flat surface,” he said of the bronzes in notes for the show. “I wanted it to be something that already existed, and it came to me in a flash, the idea of a flashlight.”

He used a real flashlight covered in sculpted metal for his first one, then created others from scratch. The realistic-looking “bread” was actually painted paper, lead, copper and wood.

Raised in South Carolina, Johns moved to New York to launch his art career after being stationed with the Army in Japan during the Korean War. As he shunned the popular abstract movement, he acknowledged struggling at first to create anything he considered satisfactory — until he dreamed one night that he was painting an American flag.

“The next morning, I got up, and I went out and bought the materials to begin it,” he said.

It was a theme he would return to often over decades and one especially well-represented at The Broad, where the exhibition includes flag paintings and drawings from the early 1950s to the late 1970s. Among them is the heralded 1958 “Leo Castelli Flag,” a huge painting created with thick brushstrokes of encaustic (oil paint mixed with wax) on canvas.

Also included is Johns’ stunning orange-green-and-black rendition, created in 1969. The equally heralded, and fragile, “Three Flags” (1958) is also there on a rare loan from the Whitney Museum of American Art. They and the other flag paintings are likely to provide much of the exhibition’s wow factor — and for obvious reasons, according to Schad.

“They are extraordinarily made objects. They can’t be denied as a matter of craftsmanship,” Schad said as he stood near one. “And they resonate on that level.”