Chinese customers who are fed up with traditional flavors of moon cakes such as mixed nuts and bean paste now have a new choice: synthetic meat. 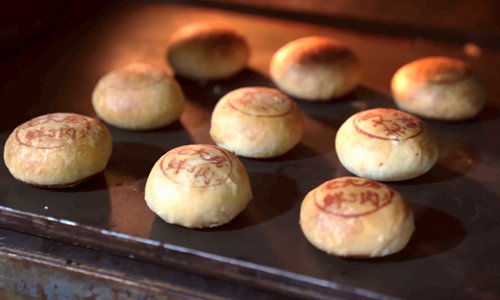 Mooncakes made with synthesis meat are being baked. (Photo: Xinhua)

It is a Chinese tradition to eat moon cakes over Mid-Autumn Festival, which falls on Friday this year.

A week before the festival, moon cakes stuffed with mock meat made from plant protein went on sale on e-commerce platform Taobao. In less than three days, over half of the limited 3,000 boxes had been sold.

The moon cakes came in a box of six, with each weighing 60 grams and having the Chinese character "zhen," or "precious," printed on top. They gave off a special fragrance after being baked.

Lu Zhongming, founder and CEO of Zhen Meat (Beijing) Food Technology Co., Ltd. said the lab-grown meat is made of plant protein by a factory in the eastern Chinese city of Yantai.

"The flavor of the lab-grown meat is modeled on that of fresh meat in Shanghai's traditional moon cakes. Our assessment showed that the two flavors are 70 percent similar," said Lu.

Lu, 28, developed an interest in lab-grown meat during his study in the United States. Due to excessive intake of red meat, his weight topped 100 kg, and he decided to go on a diet. In the process, he came across lab-grown meat.

After graduation, Lu came back to China and ventured into the health food industry, as he found that more Chinese were concerned with maintaining a healthy diet and nutritional balance. This year, he founded Zhen Meat, which focuses on developing lab-grown meat.

"At present, the synthetic meat industry is still in its infancy, and there is huge potential in the market," said Lu. "Lab-grown meat is not designed to replace real meat. It just gives consumers one more choice."

Acknowledging that most Chinese consumers are not yet ready to embrace synthetic meat, Lu said many of his company's clients have studied overseas and about 20 percent of the orders of the new moon cakes came from foreigners.

"I don't expect the taste to be comparable to real meat. I bought it mainly because I don't have to worry too much about getting fat," said a customer named Chen Wen, who works for a private company in Beijing.

"It tastes the same as meat. It is healthy and can reduce the consumption of animals. Why not give it a try," read a comment on Zhen Meat's Taobao shop.

Li Jian, an associate professor at the Beijing Technology and Business University, believed that consumers' understanding and acceptance of lab-grown meat, as well as its pricing, will be the key to the future success of the new product.

Currently, the main obstacle to the mass commercialization of synthetic meat is high cost.

"Although costs are now much lower than they were a few years ago, they are still much higher than traditional meat," said Xue Yan, secretary-general of the China Plant-based Foods Alliance.

Lu is cautiously optimistic about the future of the industry. "The generation born after 2000 will become the main consumers of synthetic meat," he said. "They have never experienced food shortages, and are willing to do their best to protect the environment and animals."