CULTURE Laba Festival: What other traditions are there besides eating Laba congee?

Laba Festival: What other traditions are there besides eating Laba congee? 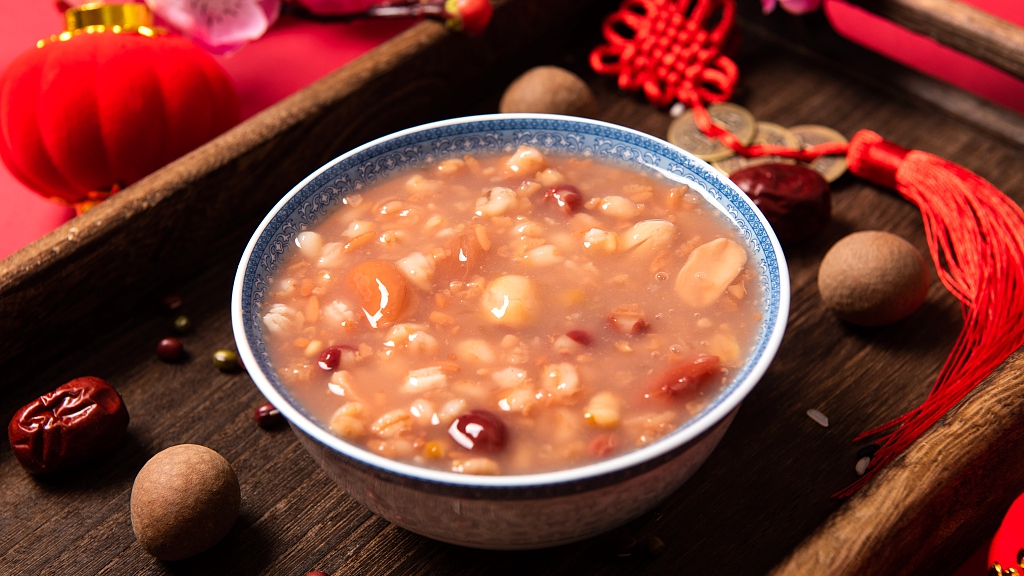 China's traditional Laba Festival is celebrated on the eighth day of the 12th month of the lunar Chinese calendar, which falls on January 10 this year. It's regarded as the prelude to Chinese New Year, as an old Chinese saying goes "Spring Festival comes right after the Laba Festival."

Enjoying a bowl of Laba congee with families and friends has been a time-honored tradition in China, and it also sweetens a winter day.

The name of Laba Festival is rich in meaning: the "La" in the festival's name refers to the 12th month in the Chinese lunar calendar, while "ba" is the number eight in mandarin. Laba congee usually contains at least eight ingredients: glutinous rice, red beans, millet, Chinese sorghum, peas, dried lotus seeds and other treats like dried dates or chestnuts. 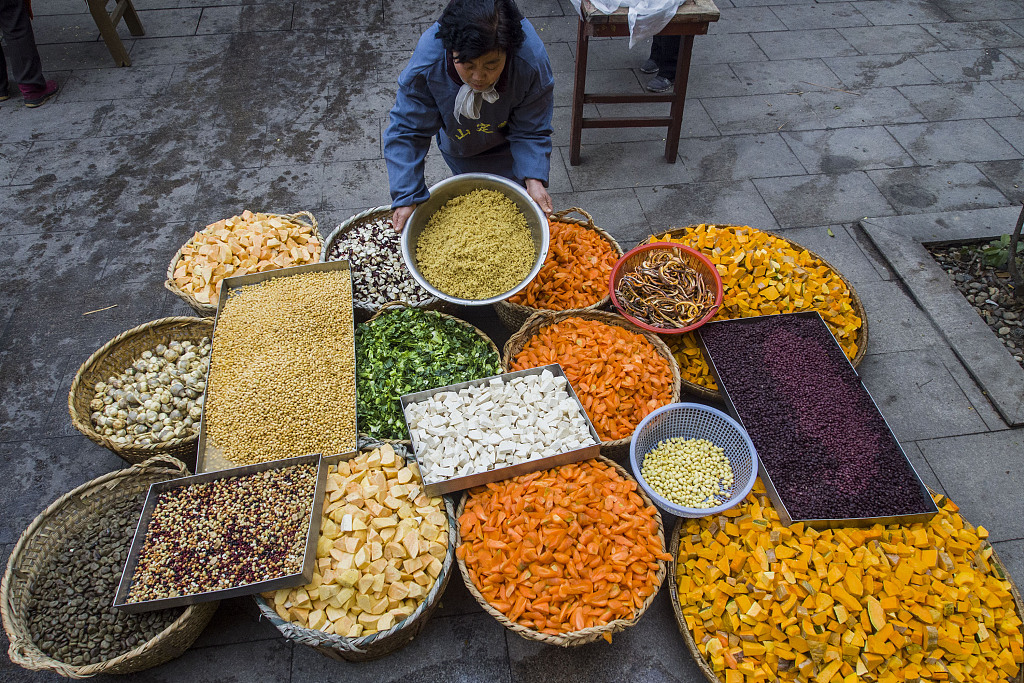 There are different versions about the origins of the Laba congee, but one of the most widespread is about Emperor Zhu Yuanzhang (1328-1398) of the Ming Dynasty (1368-1644).

Before Zhu became emperor, he was suffering in a prison on a wintery day. Unexpectedly, when he was starving, he found some red beans, rice, dates and other grains near a rat hole, so he boiled these together to make a porridge. That day was the eighth day of the 12th lunar month. Later, when Zhu Yuanzhang was emperor, he decided to commemorate that special day in prison by designating it as Laba Festival, and officially named the porridge he ate Laba congee. 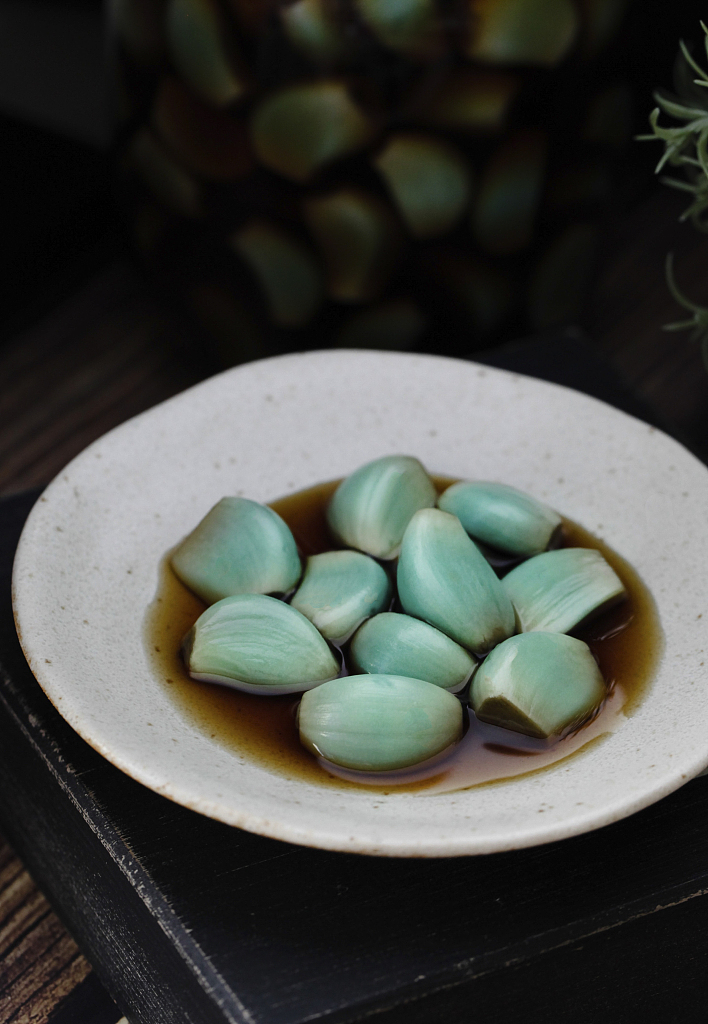 Laba garlic turns green after being pickled for more than 20 days. (Photo: CFP)

Other customs in Laba Festival

The festival is also the day when people put garlic in vinegar, to pickle for more than 20 days before the Chinese New Year. The garlic turns emerald green, and this Laba garlic will be eaten on Chinese New Year's Day as a special festival dish.

People in Qianxian County, east China's Anhui Province, eat Laba tofu made several days before. They lay the tofu out in the sun before the festival, and after being exposed for a few days, the tofu turns golden on the surface and can then be used to make dishes. In Xining City, northwest China's Qinghai Province, locals eat wheat kernel rice boiled with beef and mutton. 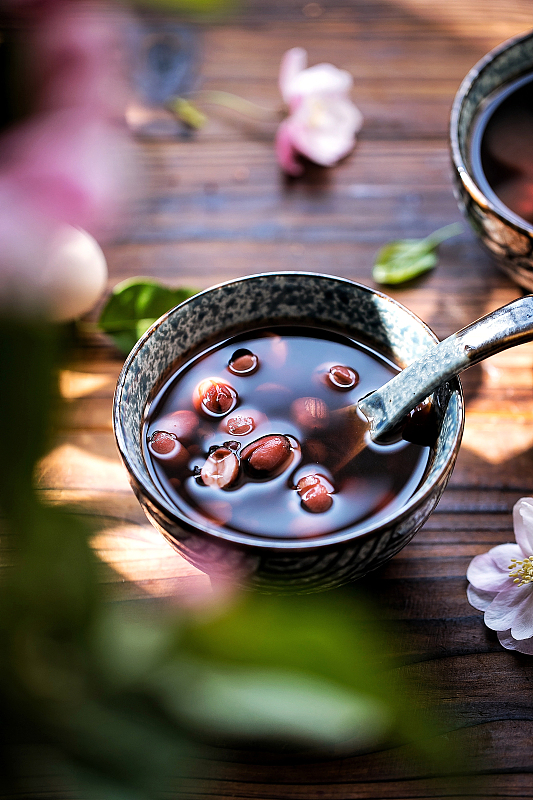 Apart from preparing the dining table, families throughout the country undertake a thorough house cleaning on this day, sweeping out the old in preparation for the New Year, which is also a part of Laba Festival tradition.