CULTURE Land of the 'giants'

Land of the 'giants' 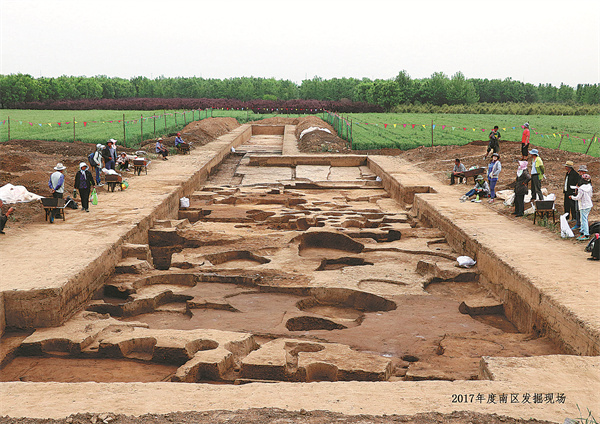 The excavation scene of the Jiaojia site. (Provided to China Daily)

A national comprehensive research program, launched in 2002, to trace the origins of Chinese civilization, has led to the excavations and studies of key sites that are about 3,500 to 5,500 years old. It has revealed a host of secrets about ancient China, including how early civilizations were formed and how they merged to create unity in diversity. China Daily speaks to experts working at these sites to decode their recent discoveries.

At a cursory glance, it is just a large expanse of cultivated land in Zhangqiu district of Jinan, East China's Shandong province, where wheat has been harvested in late June. But look carefully and you stumble upon a 5,000-year-old Neolithic settlement, which is a trove of fascinating finds, including a graveyard of giant humans, priceless jade and ceramic artifacts.

Tucked away in the plains north of Taishan Mountain, the farmland in Jiaojia village, nurtured by the Juye River, entered the annals of archaeology after a team from Shandong University discovered that it was the birthplace of a very early civilization adhering to the Dawenkou Culture (4100-2600 BC).