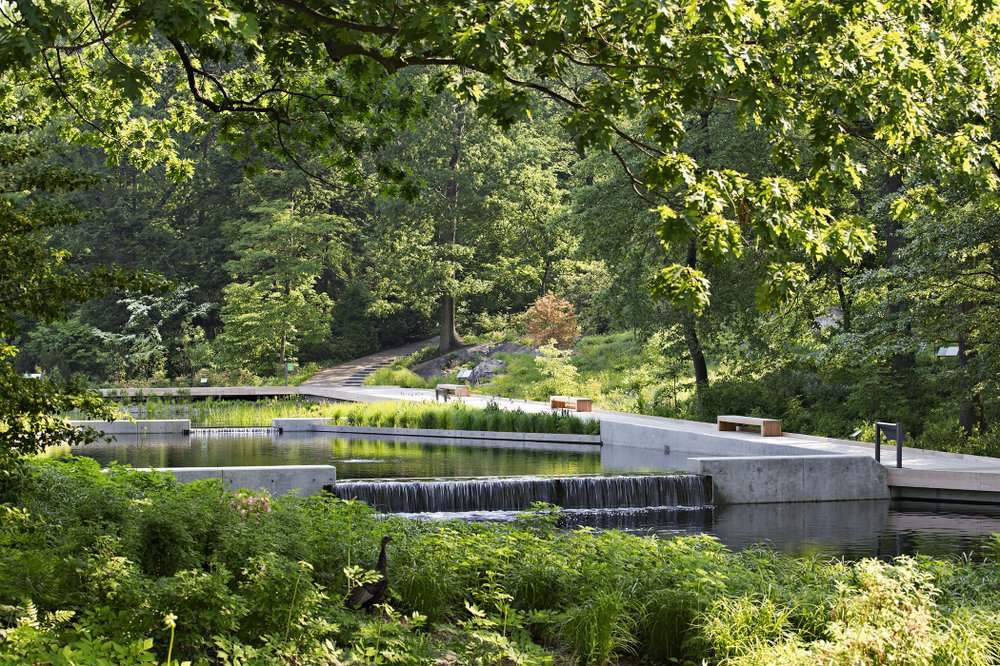 This photo provided by the New York Botanical Garden shows the Native Plant Garden at the NYBG in New York. (Photo: AP)

Landscape architects are finding themselves on the front lines of the climate change crisis, having to come up with creative ways to adapt and help mitigate problems like rising oceans and extreme weather as they design projects across the country.

“The focus on sustainability has been building slowly for a long time among landscape architects, but in recent years that commitment has really taken hold,” says Jacquelyn Bianchini, a spokeswoman at the Washington, D.C.--based American Society of Landscape Architects. She said those in her profession “have to deal with climate change more than almost any other design fields.”

Landscape architect Kate Orff heads the firm Scape, known for ecologically driven projects around the country. She feels a responsibility to take on projects that emphasize sustainability.

“Our profession has been working hand in hand with the carbon-driven world since the field’s inception. … We’ve been living in this world where we’re creating beautiful gardens in the foreground while the planet is collapsing in the background,” she says.

“My goal is to flip that relationship around so the focus is on ecological systems, and we then link what we do with policy ideas, and infrastructure to that reality,” says Orff, who recently became the first landscape architect awarded a MacArthur “genius” Fellowship.

She is the lead designer of a $60 million barrier reef and shoreline restoration project off Staten Island, New York, called Living Breakwaters. It incorporates oyster reefs, wetlands and strands to reduce the effects of storm surges. In Atlanta, it is developing a 100-mile trail linking communities along a vast distance to encourage mobility, equity and sustainability.

While landscape architects often focus on large, community projects, they say consideration of the environment also needs to take place at home, when people are designing their own gardens and deciding what to plant in their backyards.

“Even though gardening is listed in the top five hobbies of Americans, somehow we’ve not translated that into care for our environment. We need to try to somehow do a better job of bridging the divide between personal gardens and the larger global situation. It’s all connected,” says Orff.

“People who are creating home gardens, or people like me who manage gardens for the public, deal with the reality of climate every day and always have. A gardener is the first person and the last person you should talk with about climate change, and we deal with issues of plant adaptability in everything we do,” he says.

Forrest, who used to teach a class called Gardening and a Changing Climate, says, “every citizen of the world should look across all their activities and ask themselves, ‘How can I live more simply or thoughtfully so that I’m not contributing to the eventual loss of native biodiversity around the world?’ We can design our gardens to provide habitat for insects. But we can also over-fertilize and damage the environment.”

To be a good environmental citizen, he says, you need ``to learn and to pay close attention, to adapt and at the same time be a part of the effort to reduce carbon emissions.”

At the botanical garden, that’s meant experimenting with more plants native to the southern mid-Atlantic states, a region south of New York City. The Long Leaf Pine is one example.

“No one thought that it would grow here, and it’s now thriving here,” he says. “The challenge is that models suggest more extreme weather events, not a steady change. It’s hard to plant a garden that’s impervious to a hurricane or nor’easter. ... Even as the climate warms, we’re still going to have New York winters, so you’re looking to plants that can handle extremes.”

In 2017, the American Society of Landscape Architects convened a blue-ribbon panel on ``Climate Change and Resilience” which resulted in a broad set of suggested strategies and policy guidelines. And last year, the group highlighted 20 case studies of projects that put the report’s recommendations into practice. That ``Smart Policies for a Changing Climate’’ exhibition is on view at the Center for Landscape Architecture in Washington (a virtual component is on view at climate.asla.org).

“It’s everyone’s problem, and we’re in the best position to help deal with this,” says Bianchini.