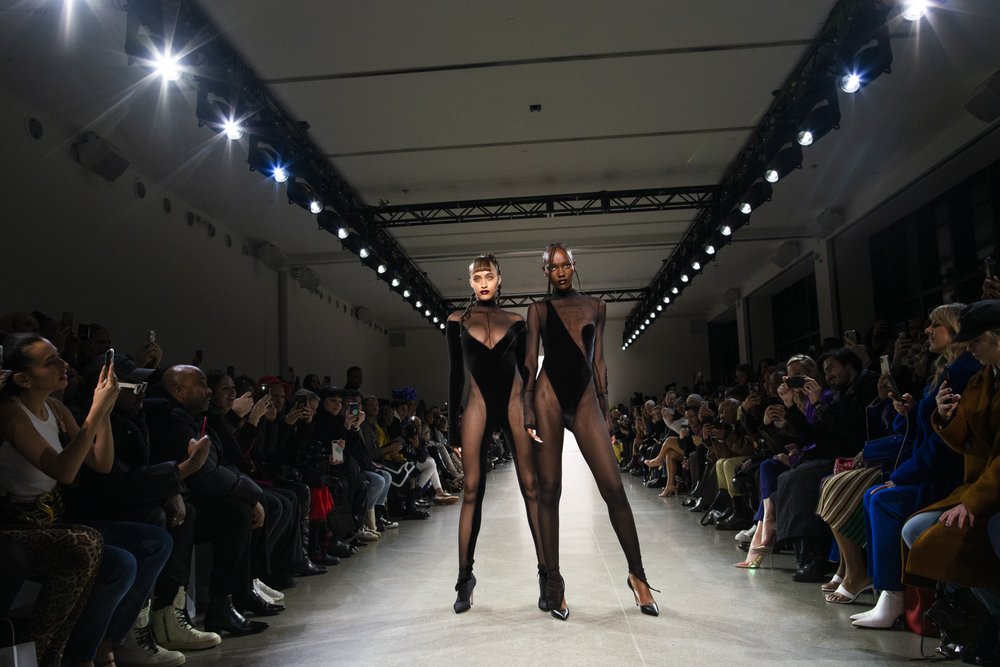 The Queens, New York-born luxury designer, who made a name for himself dressing Kim Kardashian, Beyonce and Rihanna, served Champagne backstage and counted Tinashe and A$AP Ferg among his front-row guests Saturday for a late-night show that had the audience cheering his models down the runway.

He used cut-outs in leather at the necks and shoulders of some dresses, along with sounds of sexual pleasuring to usher a few models down the runway in sheer and sparkling looks. One of his walkers carried a suitcase-size white fur bag emblazoned with: “I’m Moving Out.” Another wore a black T-shirt with a famous line from the film “Scarface,” involving an F-bomb and Al Pacino’s Tony Montana.

Some of his models, including white ones, wore high ponytails of long twists. Other were dressed in high-cut bodysuits. The womenswear designer included some men in sparkly sleeveless tops, slouchy pants and open-shirted looks showing off abs to die for.

Backstage, Smith told The Associated Press he was inspired in part by a “ghetto goth” and “super sexy” muse as he played with velvets, nylons, boiled wools and other textures for fall-winter 2020.

“I’m feeling dark,” he said. “I’m sort of inspired by a woman who is heartbroken and she’s sort of regaining her confidence. She’s single and ready to mingle.”

Smith, who is self-trained, has been building his business over a decade. He wants his garments to be high-end keepsakes, not unlike Chanel bags. For now, he’s sold in seven niche stores around the globe, including in Australia, Italy, France and the US as he slowly grows the business.

“Building a business and a brand has been incredibly difficult,” he said. “I do believe that if you put your hard work towards something it will totally unfold.”

For now, there are well-constructed, structured cropped jackets with statement lapels and interesting puff sleeves worn with matching high-slit skirts for day, all in earthy green wool. There are stiletto quilted leather boots above the knee with matching mini skirts and midriff puff jackets in gray and black, and body-hugging leather pants worn with black bustier tops, along with looks in shiny ocean blue and sea green.

“I was really inspired by female empowerment,” Smith said. “This was definitely a super, super directional collection for me.”