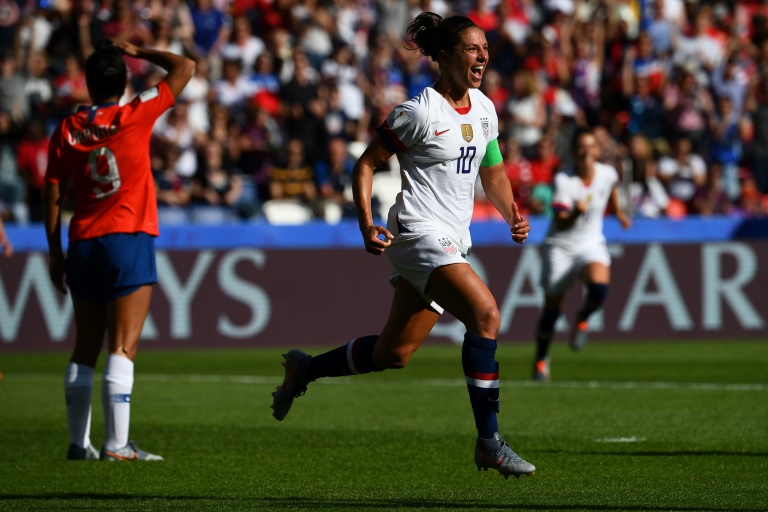 Carli Lloyd scored twice and missed a penalty as the USA eased to a 3-0 win over Chile to qualify for the last 16 of the World Cup.  (Photo: AFP)

China are among the sides hoping to clinch a place in the last 16 of the women's World Cup on Monday after seeing veteran Carli Lloyd inspire the United States to a 3-0 win over Chile in Paris that cleared the holders' passage to the knockout phase.

Eight places in the last 16 are still up for grabs heading into the final round of group matches, and former runners-up China meet Spain in Le Havre at 1600 GMT with the two teams still hoping to progress from Group B.

Both have beaten tournament debutants South Africa and lost to former champions Germany, and a draw at the Stade Oceane would be enough for each to progress, bearing in mind the four best third-placed teams all go through.

"We want to be in the last 16 and we want to do it by beating China. We are not wasting any time thinking about what could happen other than what we have to do," said Spain coach Jorge Vilda.

Already through, Germany need only a point against South Africa in Montpellier to secure top spot in the group and thereby avoid any prospect of meeting the USA in the last 16.

Meanwhile, France coach Corinne Diacre is expected to change up her starting XI with the hosts already through ahead of their meeting with Nigeria in Rennes (1900 GMT).

France won 8-0 the last time they faced Nigeria, but the Super Falcons are hoping for a different outcome this time as they target making it out of their group at a World Cup for the first time in 20 years.

"I hope that you will see another Nigeria. Hopefully we can give them a really tough game and have a point when we leave the stadium," said Nigeria's Swedish coach Thomas Dennerby.

At the same time, 1995 champions Norway will be aiming to secure their place in the last 16 when they face pointless South Korea in Reims.

On Sunday, Lloyd became the first player to score in six consecutive women's World Cup matches as the USA defeated Chile and joined Sweden in qualifying from Group F with a game to spare.

That the USA's winning margin was nowhere near their record-breaking 13-0 hammering of Thailand was largely down to the heroics of Chile's brilliant goalkeeper Christiane Endler, but it was still a one-sided victory for the holders in Paris.

Lloyd came into the line-up as one of seven changes to the US side and she netted twice in the first half either side of a Julie Ertz goal. She also later missed a penalty.

"This is the best version of me in my career. Whether you put me up top or in the midfield, I can do it," said 36-year-old Lloyd, whose goals saw her overtake the mark of Birgit Prinz, the German who netted in five consecutive matches at the 2003 World Cup.

"I think the important thing for us is that players are ready to do any role and the fact she has now scored three goals is awesome," said coach Jill Elis, who has already given minutes to all the outfield players in her squad over the two matches so far.

"She was fantastic, ready, energised. I don't think she could be in a better spot."

After going 3-0 up, the USA were denied time and time again in the second half by Endler, who Ellis called "world class" and "one of the best shot-stoppers I have ever seen".

The USA need a point from their last game against Sweden to secure top spot, after the Swedes beat Thailand 5-1 in Nice.

Just before that, Thailand pulled one back through Kanjana Sung-Ngoen, leading to emotional celebrations for a side who had been so humiliated by the United States.

"This one goal made us laugh, made us smile and makes us happy," said Thailand coach Nuengruethai Sathongwien.