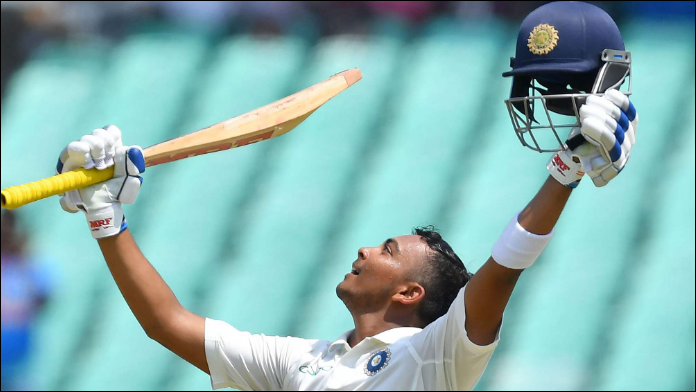 "He came, he Shaw, he conquered!" This could well have been the best banner headline a cricket-crazy sub-editor could have come up with while watching the sensational debut century by India's newest cricket sensation Prithvi Shaw.

Every time a cricketer steps into the arena of international cricket for India, he not only fights for survival in the big leagues among a ubiquitous pool of more than a million starry-eyed players but also carries the burden of expectations from over 1.2 billion people of a country where the gentlemen's game is more than just a sport predominantly played by a handful of nations, who were under the British colonial regime once upon a time.

The most popular sport in India often sets the tone of a day for a common man in the south Asian country, defines the mood and attitude of its people, drives the market and calibrates the stock indices, and it was a herculean task for an 18-year-old boy to make his first mark in the team of eleven best men being the 293rd Test cricketer from a country of a billion.

"First ball of Test cricket Prithvi Shaw plays the most important shot in Test cricket. The leave alone," was the tweet came from former Indian batsman Sanjay Manjrekar as the teenager from his hometown of Mumbai opened the batting for India in his debut Test against West Indies in Rajkot.

Since baby-stepping into international cricket with the opening delivery of the match, the baby-faced boy wonder made a giant stride over the next few hours with a magnificent century that made him the youngest Indian and fourth overall in international cricket, to reach the magic mark on debut.

Sachin Tendulkar, arguably the greatest prodigy of all time in the history of cricket and later an icon of the game, hailed his successor's 134-run magnum opus, "Lovely to see such an attacking knock in your first innings, @prithvishaw! Continue batting fearlessly."

The 99-ball century that smashed a slew of Test cricket records and marked the stunning arrival of the game's latest wunderkind was eulogized by former England captain Michael Vaughan, "Looks like India have another superstar that has arrived on the scene."

Former Indian Test wicket-keeper and batsman Deep Dasgupta, who was present at the stadium as a commentator when Shaw was dazzling with his 24-carat gem, told CGTN Sports Scene, "What stood out for me was his temperament and that should keep him going irrespective of the opposition and conditions."

He may have become a celebrity in his cricket-crazy country overnight with his Himalayan milestone but his shot to fame came after a long and grueling journey over the past several years.

He lost his mother early in his childhood days and his father had to quit his full-time job to accompany his son fulfill his cricketing ambitions. The father and son duo used to leave their humble household, situated 65 kilometers away from the city of Mumbai, in the wee hours of the morning and had to travel for more than two hours in overcrowded local trains of the hugely populated Indian metropolis to strike a balance between Shaw's studies and his passion for the game.

Many moons later, Pankaj Shaw's struggle for survival through his son's dream with the bat paid off. His prodigious son catapulted himself to the highest echelon in a superlative way to usher in a new era.

"I was thinking of my dad, because he has sacrificed a lot of things for me. The first hundred is all for him," said the boy who transformed himself as the man of the moment in his country and epitomized the famous CLR James quote: "What do they know of cricket who only cricket know?"