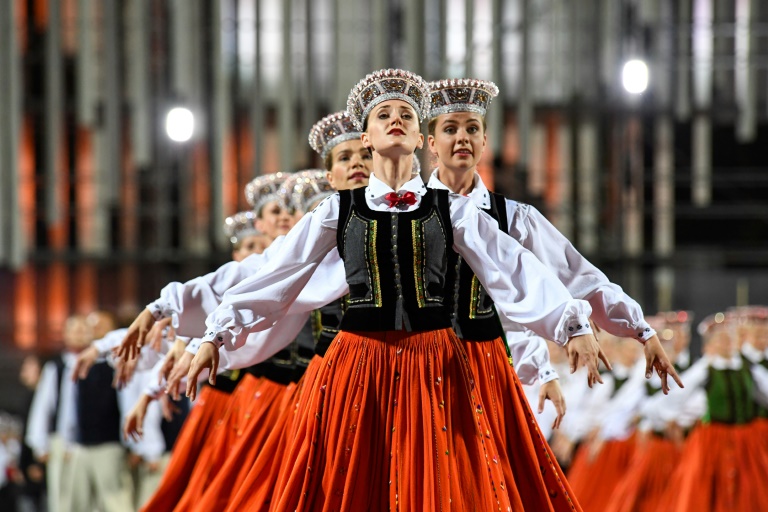 Over 16,000 people raised their voices in song in Latvia's capital Riga on Sunday, to mark the 100th anniversary of the Baltic state's independence at a festival that has been key to Latvian identity for over a century (Photo: AFP)

Over 16,000 people raised their voices in song in Latvia's capital Riga on Sunday, to mark the 100th anniversary of the Baltic state's independence at a festival that has been key to Latvian identity for over a century.

"After a week of rehearsals, we feel pretty exhausted," choir singer Aija Rijniece told AFP before going on stage dressed in a colourful folk costume, adding that the hours of preparation are "always worth it"

Over nine days, organisers estimate that the 26th edition of Latvian Song and Dance Festival has drawn up to 500,000 people to a massive forest amphitheatre in Riga.

"It's a unique experience for every concertgoer: not only does the sheer size of the performing crowd looks overwhelming, but also the artistic level is so high that it had exceeded our expectations," Aleksandrs Zeltins, who came to the festival from Germany with his wife Dina, told AFP.

On Saturday night, over 18,000 folk dancers thrilled a massive audience happy to miss the World Cup quarter-final between Russia and Croatia.

Over the last week around 43,000 performers, or just over two percent of Latvia's population, have taken part in the festival which drew around 1,000 folk choirs and dance troupes from across the EU and NATO country of 1.9 million people.

Taking place every five years, the festival began in 1873 as a rare opportunity for Latvians to use their own language in public under Tsarist Russian rule.

After the Bolshevik revolution brought down the Tsar, Latvia declared independence on November 18, 1918, but the freedom was short-lived.

Alongside Estonia and Lithuania, Latvia was reoccupied by the Soviet Union in 1940, seized by Nazi Germany in 1941 and again taken over by Moscow in 1944.

Unable to coerce Latvians into giving up the festival, Soviet authorities allowed it but added propaganda songs.

Latvian singers, however, had their own ideas and in 1985, they used the last verse of the popular "Castle of Light" folk song to call for independence and democracy.

It was not long in coming; in June 1988 the so-called "Singing Revolution" began in Estonia. Tens of thousands sang anti-Soviet anthems and it soon spread to Lithuania and Latvia.

Long-banned national songs and flags reappeared in the 1990 edition of the festival as the Soviet Union crumbled, restoring independence in the Baltic states