CULTURE Learning all about incense without a word spoken

Learning all about incense without a word spoken 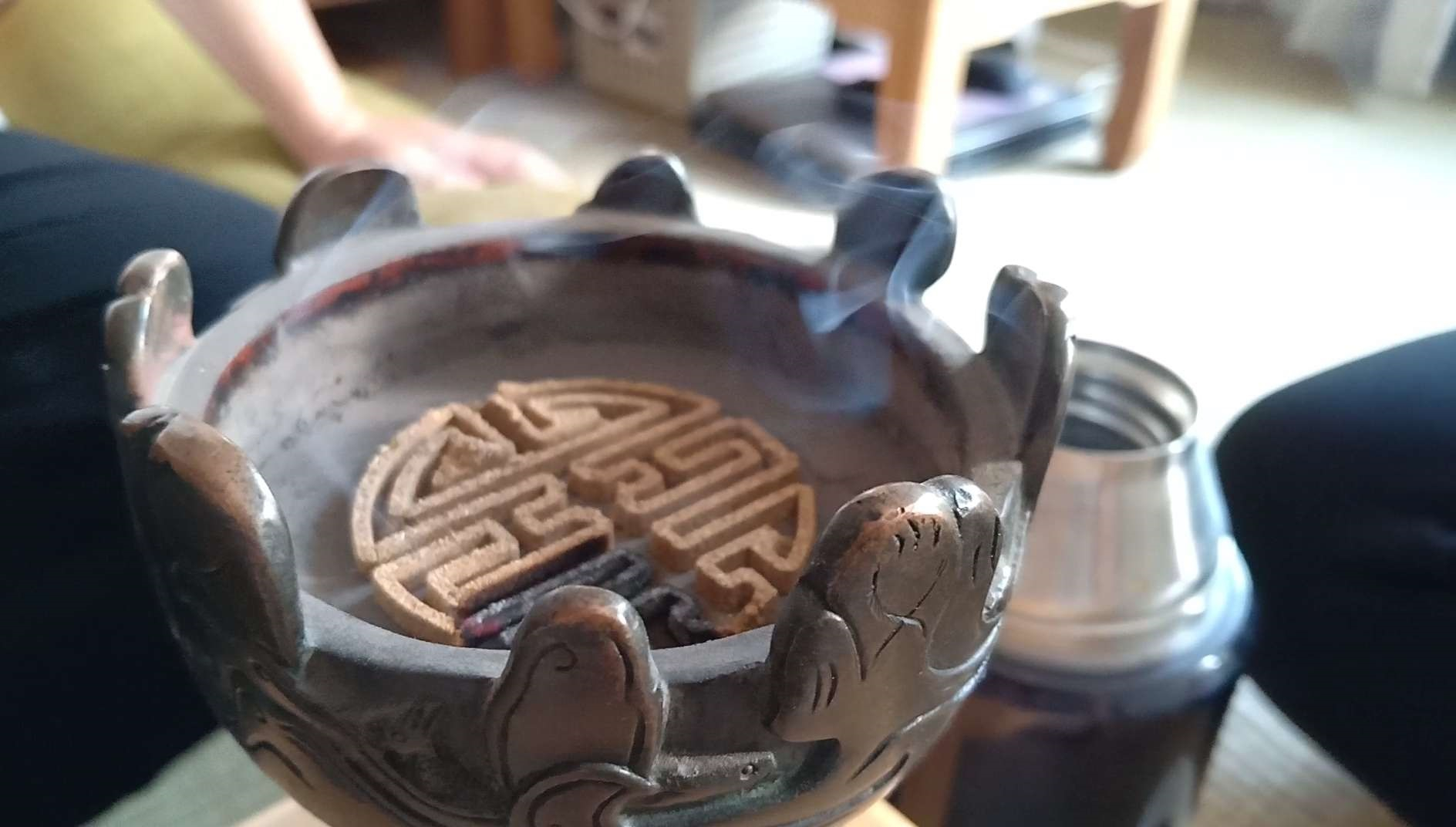 Cheng Yuanlong brushed the powdered incense off the circular mold, lifting it to reveal a Chinese symbol for “double happiness.” It looked like a tiny maze, sitting inside the incense burner. He lit the end of it and put the top on the burner, smoke seeping out slowly as the perfume of dozens of herbs and plants filled the room.

Yuanlong typed on his phone before handing it over to me. “Incense molds like this could be used before clocks to tell how much time passed, whether it is one hour or two hours,” he wrote. He held up different sized molds as examples. It was all part of a workshop that this “promoter of Chinese traditional fragrance culture” organized in his home. Despite my lack of Mandarin and his lack of English, the workshop functioned well, thanks to translation apps.

He and his partner, Li Jiao, share their acquired knowledge of incense, tea, and food with whoever is interested from his home in eastern Beijing. They have been at it for three years, but only recently have they considered addressing foreigners as they discuss posting their workshop on Airbnb Experiences. It's a curious time for China where interest in traditional culture coexists with the ever-changing possibilities of technology. Yuanlong and Jiao put the two together in a very simple, straightforward way.

The workshop has all the trappings of what many Western tourists seek in an authentic experience. Yuanlong poured more jasmine tea as the incense burned. He urged me to sample more of the nearly-fluorescent pink dragon fruit he prepared. We drank and ate, with only occasional laughing breaking the silence as we exchanged messages between us.

Yuanlong recounted the 2,000-year history of incense, back to when primitive cultures believed smoke could communicate with higher powers. He explained that the 6th to 11th centuries were the heyday of incense, with shaped incense appearing around the 14th century. I could respond and ask questions through the same app or using WeChat, which has its own translation service.

He introduced the Boshan stove, a traditional incense burner, where charcoal used to be burned with herbs placed on top. He explains some of the principles of Chinese medicine and how different incenses have different properties. Some are even purported to prevent disease.

The juxtaposition of centuries-old traditions with today's technology, however, created a sharp contrast. China has been slow to adapt to quality English services for non-Chinese speakers. While virtual reality, artificial intelligence, and other innovations attempt to woo travelers, many are still seeking the basics, like sufficiently translated signing at major sites. While progress is slow, it is happening. The car service Didi launched its English app in 2017, and Baopals has made popular shopping platform Taobao available in English since 2015.

Linguistic barriers continue to make intercultural communication, and tourism more generally, difficult. Despite the challenges, increasingly well-tuned translation apps are making it possible for people who, prior to technology's leaps, wouldn't have been able to interact on any meaningful level.

For Yuanlong, technology is a double-edged sword. He said that it is convenient, but also degrades communication for some people, limiting them in way. While the image of three people in the same room, heads down, absorbed in the glow of their phones might be the stuff of a dystopian nightmare – or even just a typical Saturday night among friends anywhere with a good 4G connection – our interactions not only managed to translate clear information, but also jokes and sarcasm.

Technology, however it is viewed, is ultimately a necessity for bringing his workshop to foreigners.

In addition to sharing the history, Yuanlong and Jiao sell small batches of natural incense. Jiao wrote, “Around places of worship you find incense on sale, but there are great differences in price and quality.” Yuanlong lights an industrially-produced stick of incense, explaining that producers use chemical adhesives today, something that seems at odds with the traditional methods, another lesson he wants to convey.

“No culture is better than mutual understanding,” Yuanlong wrote. Thanks to his app-driven workshops, he and Jiao hope to contribute to such understanding in the future.