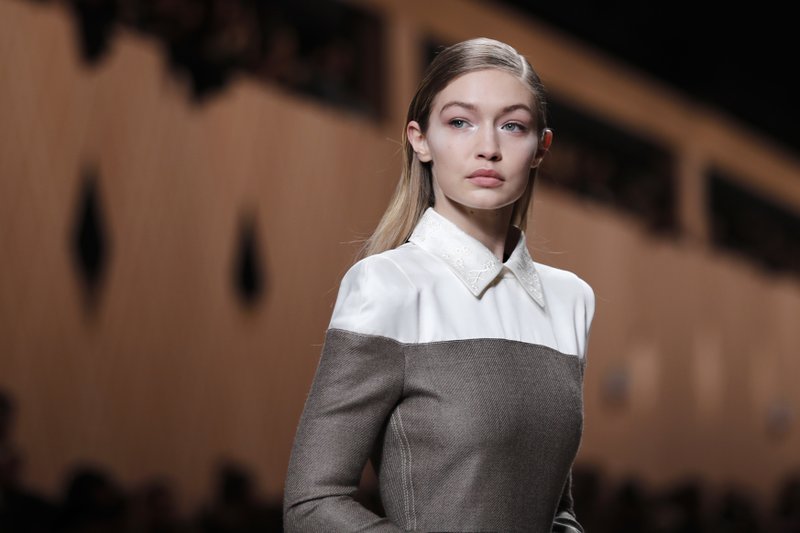 The next generation of supermodels was out in force on the second day of Milan Fashion Week on Thursday.

Gigi Hadid, sister Bella Hadid and Kaia Gerber walked for Max Mara and Fendi as Milan designers came up with looks for the power woman — giving expression to a movement of women showing they mean business as they unite to put an end to harassment in all forms and define themselves as they wish to be seen.

Some highlights from previews of next fall and winter, including shows by Max Mara, Fendi, Prada and Pucci.

A spotted sweater was tucked into a tight skirt and worn with a long Max Mara trench. The look was completed with leather gloves and suspenders, worn off the shoulders to show she’s in charge.

The punk-inspired looks for a self-assured woman mixed leopard prints and plaids, the fashion house’s trademark neutrals and a dab of pink. The collection aimed to break down the barriers between the power suit and the punk world that thrived in rebellion of it.

“We use all those emblems of rebellion as emblems of power,” creative director Ian Griffiths said backstage. “This is a woman who is saying, ‘Don’t mess with me.’”

This silhouette veered from long, full blanket skirts belted for shape, to form-fitting ruched dresses worn over stretch pants or a pencil trouser. Max Mara’s stronghold, the overcoat, united the looks, many with fringe along the sleeves. The brand dubbed it “they don’t mess with me coat.”

And Gigi Hadid was back on the runway for Fendi a few hours later, donning a prim and pretty dress: a white shirt top that created a statuesque bust topping a long-sleeved pleated dress in a serious brown.

That sense of purity and cleanness was echoed in scalloped white blouses with lace panels and embroidered details.

The stand-out accessories were mini-capes — Fendi also called them shoulder slips — that topped off looks, a hedge against cold or rain. They were square-shouldered with a vinyl effect, mini puffer capes or rich fur.

Pleats repeated themselves like a motif: pretty on silk dresses, hidden in the sides of overcoats, or forming a formal peplum under a belted suit jacket or atop a longer skirt.

The double-F logo made a cameo, on off the shoulder dresses, fur coats and sporty mink scarfs.