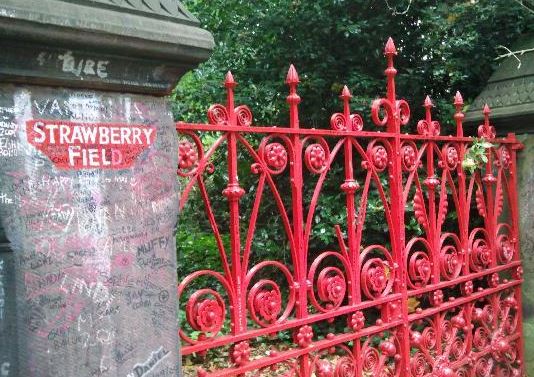 LONDON, Sept. 13 (Xinhua) -- Fans of the famous Liverpool band, the Beatles, will be able for the first time to follow in the footsteps John Lennon, it was announced here on Friday.

For years, thousands of followers of the group have peered through the wrought iron red painted gates at Strawberry Field, made famous by one of the Beatles' hit songs.

From Saturday, fans will be able to enter the one-time site of a children's orphanage, where Lennon often strolled as a teen growing up in the city.

Owners, the Salvation Army, took the wraps off a new-look Strawberry Field Friday after completing a multi-million pound scheme to create a new tourist attraction on the Beatle trail that attracts tens of thousands of fans from across the world.

An interactive exhibition, cafe and youth training center have been built on the land behind the gates in the city's up-market Woolton suburb, where Lennon lived with his aunt.

When Lennon visited Strawberry Field, it was a Gothic mansion, which was demolished years ago, but the famous gates with their sandstone pillars have been photographed millions of times over the years.

The gates are replicas after the originals were stolen some years ago, but when the thief realized the significance of the gates they were returned. The originals will now take pride of place in a display within the site.

Lennon's younger sister, Julia Baird, who is honorary president of the Strawberry Field project, described the home as a sanctuary for Lennon as a boy.

Baird said: "I suppose as children we all have somewhere that's a bit ours, a bit special. It might be a little hidey-hole under the stairs or it might be up an oak tree but it's somewhere we take ourselves. It seems from the song that this was John's special place."

"I've been really impressed by the Salvation Army's vision and now there is huge potential to make a real change in the lives of young people who will grow in the precious soil of Strawberry Field."

Lennon's song, "Strawberry Fields Forever", which included a final "s," was released in 1967, becoming a hit in the record charts with another Beatles hit, "Penny Lane", on the flip side.