Kawhi Leonard scored 34 points and the Toronto Raptors beat the Orlando Magic 107-85 on Sunday night to take a 3-1 lead in their Eastern Conference first-round series. 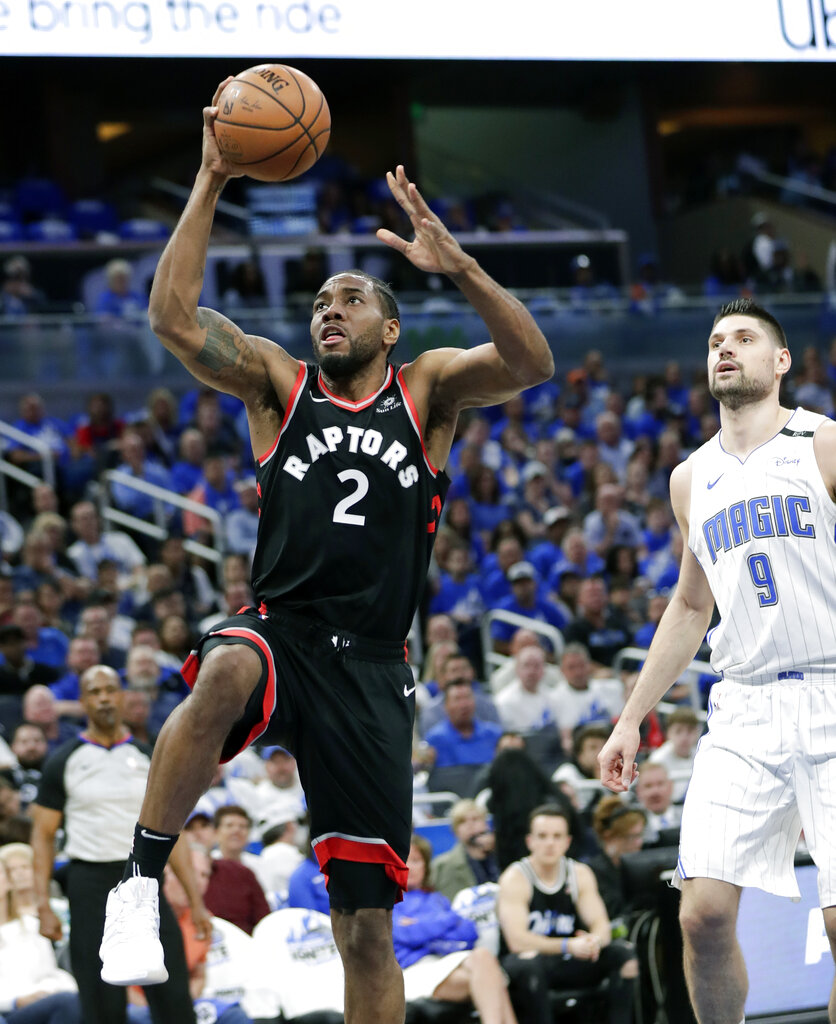 Toronto Raptors' Kawhi Leonard (2) gets a shot off as he gets past Orlando Magic's Nikola Vucevic (9) during the first half in Game 4 of a first-round NBA basketball playoff series, Sunday, April 21, 2019, in Orlando, Fla. (Photos: AP)

Pascal Siakam and Norman Powell each scored 16 for the Raptors, who can advance with a home win in Game 5 on Tuesday. Toronto has now won three consecutive postseason games, only the third time that's happened in franchise history.

Aaron Gordon scored 25 for the Magic, making his first seven shots of the second half. Evan Fournier scored 19 and Nikola Vucevic added 11 for the Magic, who committed 17 turnovers that became 21 Toronto points.

And now the Magic's season is squarely on the brink. There have been 11 teams to successfully rally from a 3-1 series deficit in a best-of-seven NBA series, and of those, only three pulled it off by winning a Game 7 on the road.

So it's not impossible — just highly improbable.

And with the way Leonard looked in Game 4, the Magic hopes seem particularly slim.

"It's fun," said Leonard, who didn't appear in last season's playoffs while dealing with injury and discontent in San Antonio before his offseason trade to Toronto. "This is what you play for all season long. And I'm just grateful to be out here on the floor again. I'm feeling good. It took a long time for me to get healthy but I'm happy with the way things are turning out now."

The 2014 NBA Finals MVP made 12 of 20 shots, added six rebounds and scored his 34 points in 35 minutes. He was in total control on both ends, and the Raptors shot 53 percent — a franchise record for a road playoff game. Serge Ibaka scored 13 and Kyle Lowry had nine assists for the Raptors.

A flurry at the end of the first half, led by Leonard and Siakam, put Toronto up by double digits and the margin stayed there the rest of the way.

Vucevic missed from close range — the Magic argued that Leonard was guilty of goaltending, the referees disagreed — with about 2:45 left in the half, a disputed play that could have gotten Orlando within seven.

Instead, they went into the break down by 16.

Toronto closed the half on an 11-1 run, with Leonard scoring the first five and Siakam hitting a pair of 3s for the final six. The last of those 3s by Siakam came with 4.5 seconds left, and the Raptors headed into intermission with a 58-42 cushion.

And it seemed like whenever Orlando flashed some hope in the third quarter, Leonard immediately snuffed it out.

A 3-pointer by Fournier to get within 12? Leonard made a pullup.

A stepback by Gordon to get within 12 again? Leonard split defenders, absorbed contact and laid the ball in to start a three-point play. And before long, there was no more doubt about the outcome.

Raptors: Toronto is 28-2 this season (and 16-0 on the road) when leading by at least 10 points at the half. ... Leonard's teams are 60-31 when he plays in the postseason. Among players in this year's playoffs with at least 60 postseason wins, only Draymond Green, Shaun Livingston, Klay Thompson and Stephen Curry — all Golden State Warriors — have a better winning percentage.

Raptors coach Nick Nurse was trending on social media for much of the game, after a fairly nondescript 3-second call on Fred VanVleet with 2:12 left in the opening quarter elicited quite the reaction from him. Nurse stood almost perfectly still on the sideline after the call, his mouth agape for about 15 seconds in some sort of disbelief.

Orlando has dropped three straight, its longest slide since losing four in a row from Jan. 23-29. The Magic have also been held under 100 points in three straight games for the first time since Jan. 6-9.

The starting fives for both teams have remained the same for all four games in this series. Boston-Indiana (which is now complete, the Celtics sweeping) and Portland-Oklahoma City are the other matchups that have seen the same starters in every game; the other five first-round series have featured different lineups at the start of games.

Game 5 is Tuesday in Toronto.