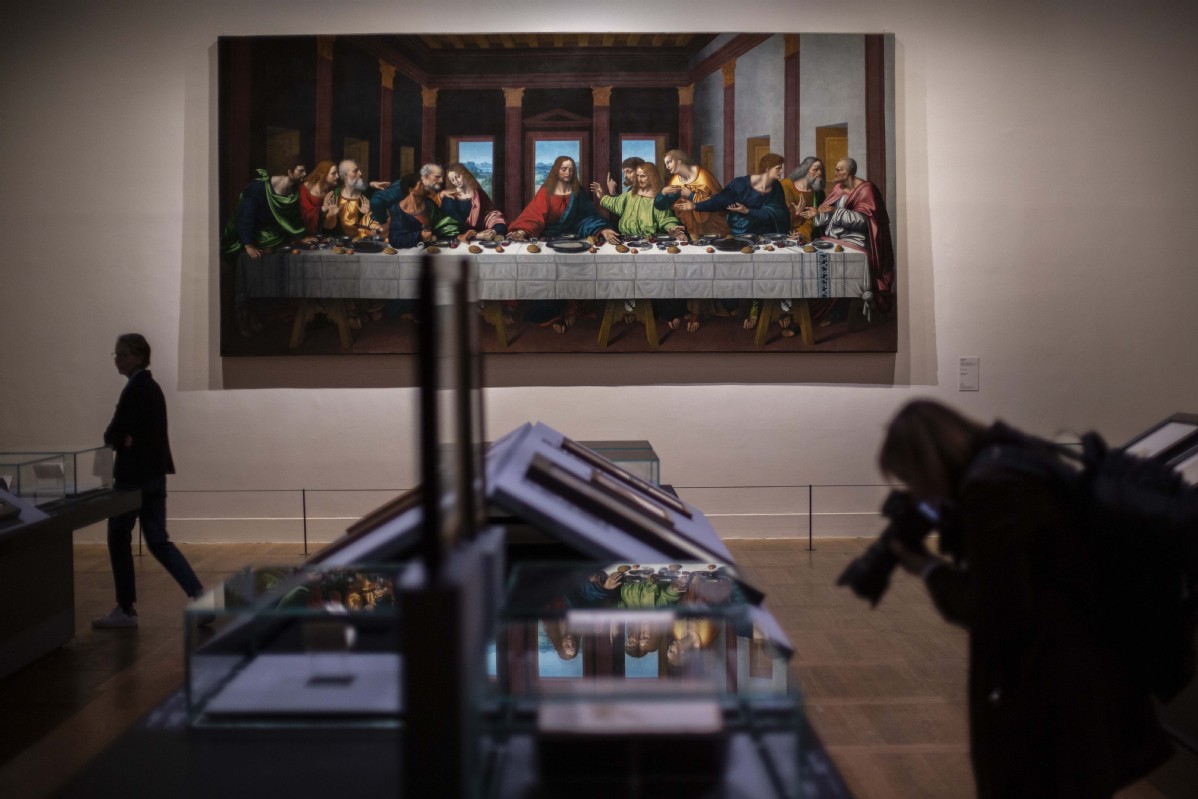 The Last Supper by Leonardo da Vinci is displayed at the Louvre museum on Sunday in Paris. The museum will unveil an exhibition of works by da Vinci on Thursday. (Photo: AP)

One of the most eagerly anticipated art exhibitions in history opened its doors to the public at the Louvre Gallery in Paris on Thursday, as a display to commemorate the 500th anniversary of the death of Italian master Leonardo da Vinci began.

The exhibition, which is expected to draw more than half a million visitors during its four-month run, has been planned for the last decade, and its display of more than 160 paintings and drawings features works loaned from the personal collections of Britain's Queen Elizabeth II and billionaire couple Bill and Melinda Gates.

Leonardo is also famed as an inventor and his importance in the art world is particularly great because of the way he fused scientific study with artistic technique.

"We hope to show who he was as an artist, why and how Leonardo was so important," exhibition co-curator Vincent Delieuvin told the BBC. "(He used a)very particular and original method of work based on science."

Leonardo's most famous piece, the Mona Lisa, is already in the Paris gallery but it will not feature in this display.

His iconic pen and ink drawing Vitruvian Man, the image of a human form inside a circle and square, was only included in the exhibition at the last minute after lengthy negotiations.

The compilation of the exhibition only came about after years of negotiations between French and Italian authorities. The artist spent his final years in France but his work is a major part of Italian national heritage.

Last November, Italy's then under-secretary for cultural heritage ministry, Lucia Borgonzoni, said: "Leonardo was Italian. He only died in France. France cannot have everything," and other right-wing politicians said Italy was being left on the fringes of a major political event.

However, after legal discussions, it was agreed that Vitruvian Man could be loaned to the Louvre for eight weeks, because of "the exceptional global relevance of the (Louvre)exhibition and (Italy's)desire to maximize its heritage potential."

Virtual reality and infrared imaging technology will allow visitors to study Leonardo's notebooks and also see details in pictures previously hidden. The exhibition also includes work by his contemporaries, to show where his influence, and focuses on his scientific artwork.

Some of his engineering designs will feature, along with several of his studies of human form, loaned from the British royal collection at Windsor Castle.

These include the rarely seen Study of Hands and the Head of Leda, the mythological mother of Helen of Troy.

"Elizabeth was very generous, sending 24 pieces from her collection; because of her we are able to show a fine selection of his drawings," said Delieuvin.

The Louvre is not the only major world gallery to be marking Leonardo's anniversary. From Nov 8, London's National Gallery is hosting an exhibition entitled Leonardo: Experience a Masterpiece, which runs until January 2020 and gives visitors an immersive experience in his piece The Virgin of the Rocks.