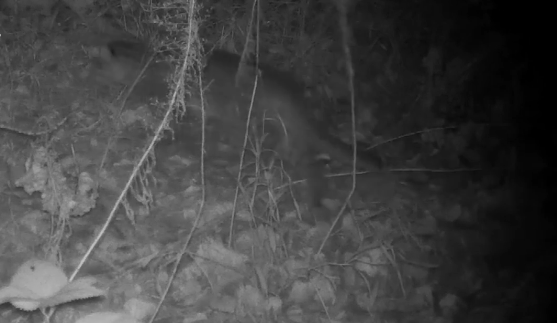 A leopard cat is captured on an infrared camera in Dafeng district of Yancheng city, East China's Jiangsu province on Nov. 7, 2018. (Photo from web)

A leopard cat was caught on an infrared camera in Dafeng district of Yancheng city, East China's Jiangsu province, when a research team of Nanjing University conducted a survey of mammals, ThePaper.cn reported on Wednesday.

It's the first time in more than a decade the spotted cat has been seen in the province's coastal area, according to the team.

Leopard cat, or prionailurus bengalensis by its scientific name, usually lives in natural environments such as forests, shrubs and barren mountains.

Dafeng district has flat land and its agriculture is well-developed, so there are few suitable hiding or breeding places for leopard cats in the area. They mainly live in shrubs and haystacks in nearby hills.

The animal used to be abundant in China. In the 1960s, there were no fewer than 1 million leopard cats in the country, but the number of them declined dramatically due to hunting and trading.

Currently the leopard cat is an endangered species in China, and was listed in appendix two of the Convention on International Trade in Endangered Species of Wild Fauna and Flora.

On plains where there are no big cats or canids, the leopard cat can be viewed as an "apex predator" that plays an important role in the integrity and stability of the ecosystem, the team said.

The survival of the animal depends on proper habitat and abundant prey. Experts said the re-emergence of the leopard cat shows the region has a healthy ecosystem, providing a home for rare and endangered wildlife.