CULTURE Li has high hopes for next generation

Li has high hopes for next generation 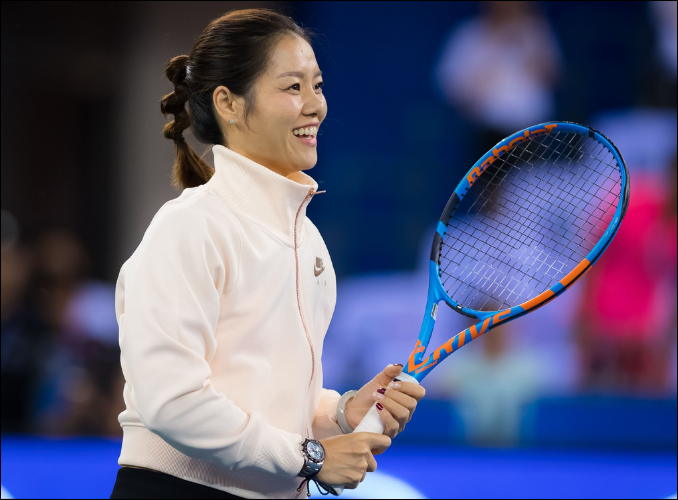 Over two decades since her debut appearance at Wimbledon, Chinese legend Li Na still remembers her awkward introduction to the iconic London tournament.

Li first competed there in the girls' singles in 1998, and was tripped up by the switch from hard courts to grass, not to mention the All England Club's famous sartorial etiquette.

"I had no clue at all on how to play on grass," Li recalled at Tuesday's The Road to Wimbledon junior training camp in Beijing.

"I didn't even know I had to wear all white, nor did I prepare a different pair of shoes for the surface. I was overwhelmed, in an embarrassing way."

Li played the final match of her stellar career at Wimbledon 2014 before retiring due to a chronic knee injury two months later.

Now enjoying life as a housewife and businesswoman, the two-time Grand Slam singles champion spares no effort to ensure that China's new generation of players are better prepared than she was for life as a pro.

Her passion for the sport remains undiminished and shone through at Tuesday's event at Beijing's 1123 Junior Tennis Academy, where the 37-year-old hit shots with some young hopefuls and shared insights about life on the tour.

With more international tournaments visiting the country and strong government support and investment, tennis has entered the athletic mainstream in China, yet the nation still hasn't found anyone to assume Li's throne.

Li, who inspired the boom after winning Asia's first major title at the 2011 French Open, warned that increased funding and exposure for the sport does not guarantee Grand Slam champions will follow.

"After the US Open (in August), players don't need to travel overseas with tournaments held at home one after another," said Li, who is an ambassador for her hometown Wuhan Open in Hubei province.

"However, for the younger players nowadays they are likely to squander the opportunities that we had to fight hard to earn, because everything comes easier and more frequently.

"They have to focus on the game itself rather than the exposure or expectations off the court to really improve one event at a time and benefit from the momentum."

Five Chinese women are ranked in the world's top 50, spearheaded by No 18 Wang Qiang, who this week reached the Miami Open quarterfinals to become the first Chinese to go that far at the premier mandatory event since Li's run to the final in 2014.

Li is delighted to see her compatriots mixing it with the world's best, but said she expects more.

"It's good to have a group of girls in the top 50, but the resources they enjoy today make me believe they could do better," she said.

With more advanced coaching and training methods, WTA CEO Steve Simon reckons China will unearth the next Li sooner rather than later.

"The chances of finding the next Li Na are very bright; it's just a matter of time," he said earlier this month in Shenzhen.

The return of The Road to Wimbledon, a tailor-made tournament for under-14 players, for its fourth year in China is part of the latest effort to deepen the domestic talent pool.

It began on Monday with a weeklong trial camp overseen by Dan Bloxham, head coach of the All England Club. The best performers will be picked to compete at a national tournament in Nanjing in May, which will decide China's representatives at the global final at Wimbledon from Aug 11-17.

Michael Gradon, an All England club board member, hopes the initiative can change the perception of grass court tennis as a realm of prestige and luxury.