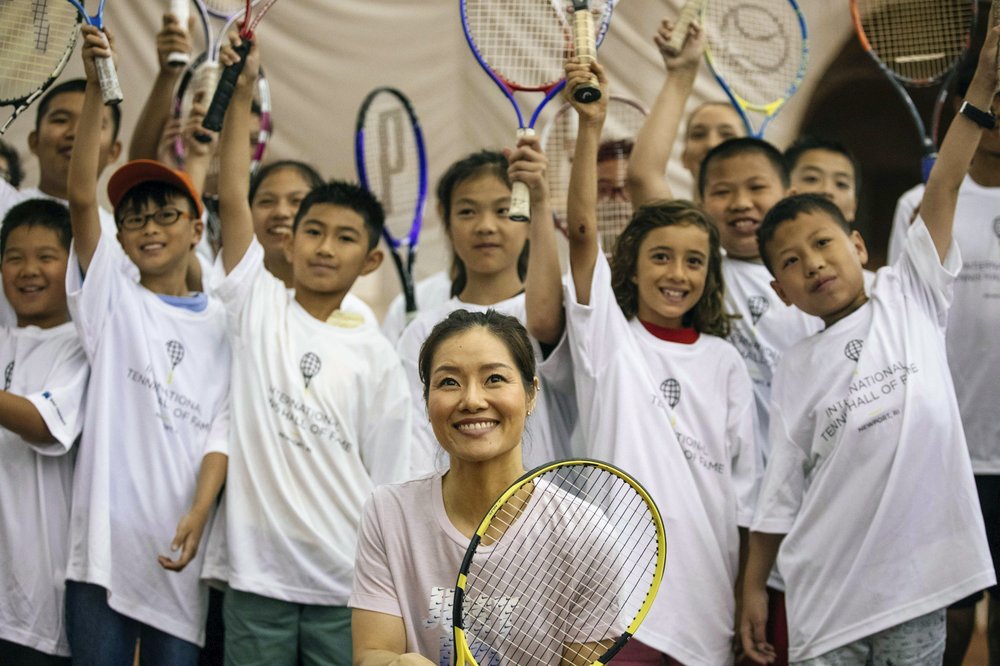 Li Na remembers first watching a tennis match on TV, drawn to the unforgettable style of one of the players.

Andre Agassi had long hair, an earring and wore denim shorts, and made an instant fan in China.

Li went on to become one herself.

The first player from Asia to win a Grand Slam singles title, she will be inducted into the International Tennis Hall of Fame this weekend, celebrated not only for her skills on the court but for her contribution to the growth of the sport in her country.

“She’s like an icon in China. She’s a huge superstar,” said Mike Silverman, the director of sport for New York’s City Parks Foundation.

Li conducted a clinic with children from the organization on Thursday and her influence was obvious. Many of the young players were Asian, including one teenage boy Silverman thinks is good enough to get a college scholarship. They were probably too young to remember much of her career — she retired in 2014 because of knee problems — but her impact didn’t end when her playing days did.

“There’s no question that Li Na, when she was playing and even now, tennis in China has never been the same since she won the French Open,” Silverman said. “It changed everything.”

That was in 2011, when more than 116 million people in China watched the final. Li added a second major title in 2014 at the Australian Open after twice losing in its final, rose to No. 2 in the WTA rankings and earned more than 500 singles wins.

“At least I always try my best in tennis on the court,” Li said. “If you try everything I think one day for sure there will be payback.”

The mother of two children is a little nervous about the induction ceremony in Newport, Rhode Island, as she tries to put together her thoughts in English. But perhaps she can take a lesson from something else she admired about Agassi.

“He never cared about what other people say, he just did his own,” said Li, who is joined in this year’s class by fellow two-time Grand Slam singles champions Mary Pierce of France and Yevgeny Kafelnikov of Russia.

Li said she can see the growth of tennis in China, where the WTA Finals will be played in Shenzhen and which got another event on the tour’s calendar this year when the former Connecticut Open was moved to Zhengzhou.

“It’s not only good for the athletes, it’s also good for the fans to have less traveling,” Li said. “They can see a high-level tournament in China.”

Fans can see plenty of them, as there are nine women’s tournaments in China after the U.S. Open. The country may not have a long tennis history, but Li thinks it will continue to get bigger.

“For me, I think China tennis is still young,” she said. “They can have a lot of time to grow up.”