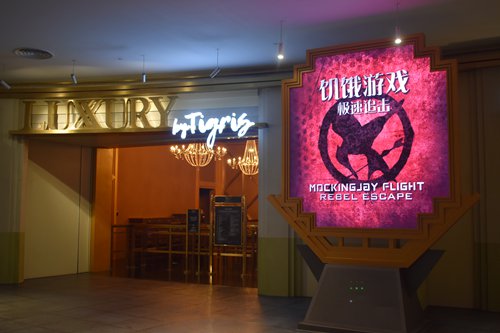 As the familiar score from the vampire romance movie Twilight floated through the air, I seemed to see main characters Bella and Edward dancing in front of me on the small stage decorated with lights and green plants. On one side of the stage, I could see a replica of Bella's old orange-colored pickup truck in a corner, a reminder of the time Edward saved Bella from a car accident at the beginning of the movie.
This vivid scene was on display at Lionsgate Entertainment World, the first movie theme park to bring cutting-edge technology to an Asian country.
The park is the first amusement park built by Lionsgate, a US entertainment company, in Zhuhai, South China's Guangdong Province. It is an indoor interactive experience center themed on the studio's hit films such as Twilight, The Hunger Games, the Divergent series and Now You See Me. General manager Selena Magil told me that since the park opened on July 31, daily ticket sales have continued to increase.
The vertical park covers four stories in total. The customer service center is on the first floor, while the second floor has entertainment zones dedicated to the films The Hunger Games and Escape Plan. The third floor covers Divergent, The Gods of Egypt and Now You See Me, with the fourth floor completely dedicated to the popular Twilight Saga. Like many theme parks, souvenir shops and dining facilities are spread out on each floor.

According to Zhu Yuqun, vice manager of the park, one of the most popular experiences is the Midnight Ride in the TwilightSaga zone. When I entered the door to the ride with five other guests, I was asked to put on a pair of VR goggles and get on a motorcycle. When the ride began, I was thrust into a virtual scene in which me and my fellow riders had to follow a pack of werewolves through a forest in the middle of the night to lure out a group of vampires that the pack would then ambush and kill.

Each guest can choose their own path by turning the handlebars of the motorcycle and leaning, choosing from routes with three levels of difficulty across multiple locations. The added vibration from the motorcycle made the simulated high-speed driving experience feel even more realistic.
Although I knew I was wearing a VR headset, the entire scene felt so real to me. Looking down, I saw I was wearing body armor, and riding a yellow motorcycle as I kept pace with the werewolves running through the forest. As I excitedly sped through the moonlit night, a male vampire suddenly jumped out and stopped me. He showed his sharp and bloody teeth, looking as if he wanted to bite me. I struggled to get going and lose him, but I couldn't move at all. Just as I feared I was going to be killed, a wolf jumped on the monster and knocked him away. My life saved, we rode back to a garage, and Jacob, a werewolf and one of the protagonists in Twilight, told us that we did a good job and had successfully finished our task. A sense of pride sprang from my heart. We were the victors in the thrilling chase!
A taste of Macao
In addition to the VR experiences, the amusement park also provides visitors with many interactive activities including a magic show held on a street that looks just like the streets of Macao as seen in the magic heist film Now You See Me.
Walking down the street, I felt like I was in Macao. I visited several old-style shops like a herbal tea shop and antique store. There was also a street vender selling some drinks and Portuguese egg tarts from a small stall.
I entered a retro souvenir shop that oozed with a mysterious atmosphere. In one corner, a magician surround by many visitors was performing magic tricks. The magician was playing a magic number games with some small balls and bowls and invited guests to participate. Her outstanding performance won the applause of those in attendance.
Another interesting activity was the fashionable citizens of the Capitol from The Hunger Games series.
"The clothes are exquisitely designed to recreate the scenes from the movies. Guests can try on the glamorous costumes and immaculate makeup at the Capitol Couture Collection, immersing themselves into the world of The Hunger Games," Zhu said.
Standing out
"We are very proud about our uniqueness because compared with Disneyland in Shanghai and the upcoming Universal Studios in Beijing, Lionsgate Entertainment World is the first indoor amusement park with advanced technology that allows visitors fully become involved in the plot of a movie. Visitors will not be bothered by bad weather, and can stay as long as they want to," Magil said.
Magil also noted that the location of the park is also very special. Since Zhuhai is located next to the Macao and Hong Kong special administration regions, she is confident the park will become a tourist attraction.
"We are very satisfied with virtual experiences. My son has watched all the movies, and my daughter likes all the projects," a man who had brought his entire family to the amusement park from Macao for a day of fun told me.