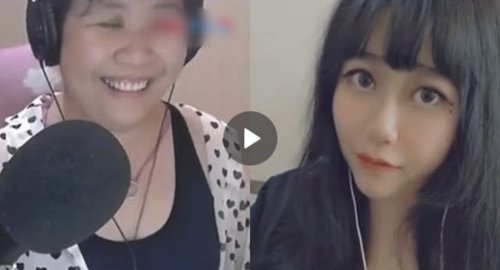 An online celebrity with 277,000 followers doesn't realize her superimposed disguise has disappeared from the screen, revealing her to have a face not nearly like the princess her fans assume her to be. (Photo: Global Times)

Chinese live-streaming platform Douyu has deleted the videos and banned an online celebrity who was previously worshipped as a "cute goddess" but later turned out to be a 58-year-old woman during a technical glitch.

Douyu said her deceit was intended to self-hype and her improper remarks "challenged the public's bottom line and caused adverse social impact."

"We firmly oppose malicious hyping and we actively promote positive energy on the internet. We will, as always, strengthen platform management and regulate hosts' behaviors, so as to lead the healthy development of the industry," the platform said through an official statement on Twitter-like Sina Weibo.

The online celebrity was known for her "sweet and healing voice" and was worshiped as a "cute goddess" by tens of thousands of followers.  During her earlier online broadcasts her face was blocked by a superimposed emoji.

Her true likeness was finally revealed after a technical glitch on July 25 exposed her to be a much older woman. Her many followers who had spent large sums of money buying digital gifts for her said they felt hurt.

She later admitted her "reveal" was purposefully planned to create controversy and fame. Her followers have since jumped from 50,000 to 673,000.

"She was finally banned. It is really annoying to see such a farce," said a Net user on Weibo.

In a post on her Weibo account the woman in the center of the controversy said she is contemplating a "bold idea" of establishing her own online platform but needs financial support.

She also defended herself saying "live broadcasts are just a show or performance, the audience needs to watch them properly."