LONDON, May 9 (Xinhua) -- City Hall bosses are preparing for two victory parades to give a heroes welcome to Liverpool FC if they capture the European Champions League trophy and the English Premiership title. 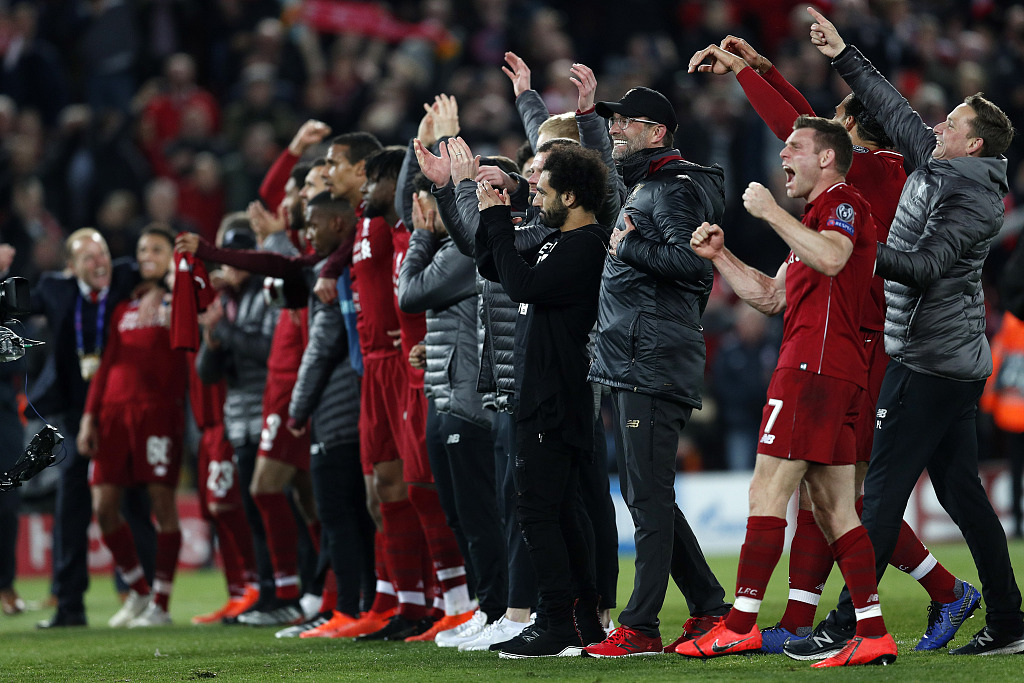 Liverpool's players and Jurgen Klopp celebrate at the final whistle during the UEFA Champions League match at Anfield, Liverpool, May 7, 2019. (Photo: VCG)

Anderson said: "If the Reds win one or two trophies, they will receive a well-deserved heroes' welcome and we will put on a show to make the city proud."

A Premier League win would see a parade in an open-top bus taking place on Monday May 13, while a parade for a UEFA Champions League Final victory would take place on Sunday June 2. Both dates have been requested by Liverpool FC.

Details were revealed Thursday and follow Liverpool's stunning victory this week when a 4-0 win at the famous Anfield stadium earned them a place in next month's European Champion's League final in Madrid.

Both parades would start in the city's Allerton suburb and end at the heart of Liverpool's World Heritage Site waterfront.

When Liverpool last won the European Cup in 2005, hundreds of thousands of fans packed the victory parade.

Thousands of Liverpool fans are now scratching around for air tickets to Madrid, but flight ticket prices have rocketed.

Liverpool went into this week's game trailing 3-0, and the turnaround will go down in football history as one of the most stunning ever comebacks.

Mayor Anderson said: "Anyone who is a football fan can't help to have been impressed by Liverpool's performance this season - whatever their allegiance. The twists and turns have kept us all gripped and as a result it is going right down to the wire. We can't wait until the result to plan for a parade because it is a complex logistical challenge with many partners involved and simply can't be organised overnight."