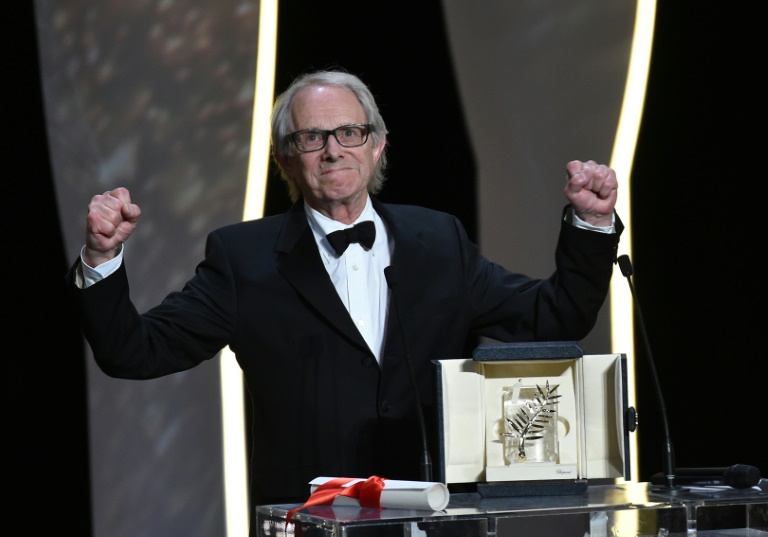 British director Ken Loach returns with "Sorry We Missed You", an indictment of the gig economy. (Photo: AFP)

Despite red-carpet protests last year led by Hollywood star and jury head Cate Blanchett demanding equality, only four of the 19 films competing for the Palme d'Or top prize are directed by women.

Fremaux -- whose selection committee consisted of four men and four women -- insisted that female talent was coming through in the rest of the official selection, with 13 women directors making the cut overall.

But the big news was that there was no place -- as yet -- for Quentin Tarantino's much-anticipated new movie, "Once Upon a Time in Hollywood", starring Brad Pitt and Leonardo DiCaprio.

Fremaux hinted that he would hold the door open for the maker of "Reservoir Dogs" until the very last minute.

"It is not yet ready," he told reporters. "It's a bit of a sprint... we hope we will have good news to announce" before the festival starts on May 14.

Loach, 82, who won the Palme d'Or prize in 2016 with "I, Daniel Blake" -- which he then said was his final film -- returns with "Sorry We Missed You", an indictment of the gig economy.

Fremaux revealed that the reclusive American Malick will premiere his World War II story, "A Hidden Life", about a German conscientious objector guillotined by the Nazis in 1943.

The world's biggest film festival, which sees itself as the "Olympics of cinema", will open with cult US director Jim Jarmusch's "The Dead Don't Die".

They have migrated in recent years to the rival Venice film festival in August, which the studios believe gives them a better springboard for the Oscars.

Netflix also premiered its Oscar-winning "Roma" at Venice last year after a bitter row with Cannes -- since partly patched up -- over its rule that selected films must be shown in French cinemas.

Fremaux, however, appeared to have some stardust up his sleeve, hinting that Elton John may perform on stage before the biopic of his life, "Rocketman", premieres out of competition.

What the Cannes line-up lacks in glamour, it attempted to make up with star auteurs, social issues and a global span.

Korean master Bong Joon-ho of "Okja" and "Snowpiercer" fame is back with a tragicomedy film noir called "Parasite" about the growing divide between rich and poor in his homeland.

Another Cannes regular Pedro Almodovar also returns with his most personal film yet, "Pain & Glory", which has already opened to great acclaim in his native Spain.

This time round it's a caper about gangsters who form a union.

Palestine film-maker Elia Suleiman charts a struggle to find an alternative homeland in "It Must Be Heaven".

The British Oscar-winning maker of "Amy" -- which revealed the singer Amy Winehouse's demons shortly before her death -- will concentrate on the footballer's days at FC Napoli.

Triple Cannes winners the Dardenne brothers tackle the path of an Islamic extremist from their native Belgium in "Young Ahmet".

Brazilian director Kleber Mendonca Filho staged a red-carpet protest about the impeachment of his country's ex-president Dilma Rousseff when he premiered his last film "Aquarius" at Cannes in 2016.

This time he heads into Brazil's disputed interior in "Nighthawk".

Chinese director Diao Yinan -- who won the top prize at Berlin for the crime story "Black Coal, Thin Ice" -- has a group of gangsters forming a union to take over a city in "The Wild Goose Lake".

Fremaux said the festival was full of "political" movies about "daily life, individuals who battle against adversity. We go into people's homes to tackle ordinary problems.

"The festival isn't political, it is the artists who are," he added.

Made by Ladj Ly, a longtime friend and collaborator of star street artist JR, it is set in the deprived estates where he grew up and where the 2005 Paris riots kicked off.

Fremaux said that as well as Tarantino's movie about a Hollywood stunt double, other films might yet make it into one of the festival final slots.

"The competition is probably name-y enough to appease those who were disappointed by last year's (ultimately strong) selection," wrote on Twitter.

The festival, whose jury this year is headed by the Mexican maestro Alejandro Gonzalez Inarritu of "Birdman" and "The Revenant" fame, runs from May 14 to 25.