CULTURE Local panda protection base blamed over a cub’s death

Local panda protection base blamed over a cub’s death 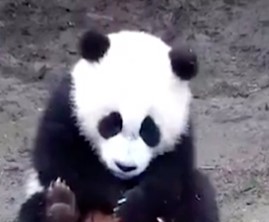 Chinese netizens were furious over the neglect of duty of a local giant panda protection base after a panda cub died of suffocation while playing with a rope ball swing in a sanctuary in Southwest China's Sichuan Province on Thursday, unnoticed by staff.

The incident took place at 2 am on Thursday when the eight-month-old panda cub “Luluzai” was playing with a rope ball swing alone in the outdoor playground at the Shenshuping Giant Panda Protection Base, said an announcement from the China Conservation and Research Center for the Giant Panda on Friday.

It had struggled for a while when the rope wrapped around its body and died a few minutes later.

The protection base said as the incident took place at midnight, the patrolling staff failed to realize the abnormality and only found the body of “Luluzai" at 9 am on Thursday.

“It made us fully realize a loophole in safety management. We will be more cautious of the items placed by giant pandas cubs, thoroughly investigate hidden safety hazards in the park and strengthen night patrols to avoid such incidents,” said the announcement.

Netizens were furious over the death of the cub and blamed the panda base for separating the cub with its mother at an early stage.

“If the mother and cub weren’t separated, such a tragedy would not happen! Please let the cub grow up with its mother,” commented an internet user on the Twitter-like Sina Weibo.

China Conservation and Research Center for the Giant Panda has raised a total of 182 giant pandas in its four bases － Dujiangyan Qingcheng Mountain Base, Ya'an Bifengxia Base, Wolong Shenshuping Base and Wolong Hetaoping Base.

The panda canter was closed to the public starting from January 25 due to the coronavirus epidemic and is expected to reopen in the near future.