Local US health agencies struggle to ramp up virus tracking 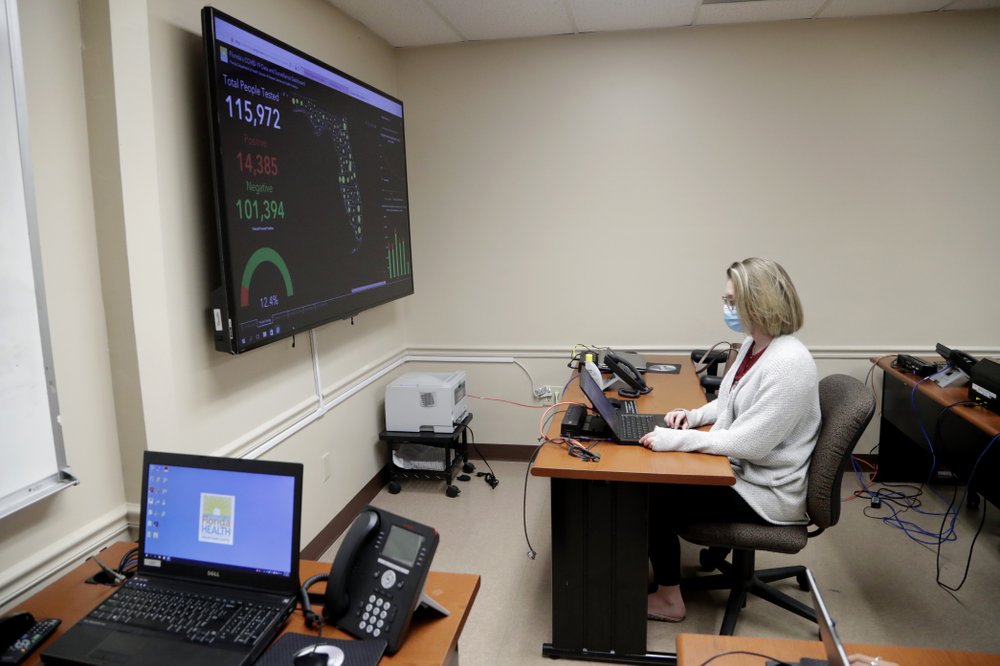 In this Wednesday, May 13, 2020 photo, Meghan Peck works on contact tracing at the Florida Dept. of Health in Miami-Dade County, during the new coronavirus pandemic, in Doral, Fla. (Photo: AP)

As state after state begins to reopen, local health departments charged with tracking down everyone who has been in close contact with those who test positive for the new coronavirus are still scrambling to hire the number of people they need to do the job.

They are often hundreds — even thousands — of people short of targets for their contact tracing programs. Public health experts have consistently said robust programs to test more people and trace their contacts are needed for states to safely reboot their economies and prevent a resurgence of the virus.

With 2.7 million residents and roughly 100 to 300 new COVID-19 cases a day, Miami-Dade County has 175 people tracking down people who were potentially exposed to the virus.

“The whole point of the lockdown was to buy time to have a better way to keep numbers down,” said Jeremy Konyndyk, who led the humanitarian response to the Ebola outbreak in West Africa during the Obama administration. “And that’s why so many of us are screaming ourselves hoarse about testing and tracing.”

Public health experts say contact tracing systems should be in place before cases become widespread, so every new infection can be tracked and the person’s contacts identified, tested and isolated from the rest of the community.

Until recently, there had been scant federal guidance on what contact tracing should look like, and there is still no coordinated federal strategy. While other countries are taking a national approach to contact tracing, the US is leaving it to states to devise their own programs.

The result has been a patchwork of efforts. An AP review in late April found little consensus among states on basic questions such as how many investigators are needed.

Officials in Cook County, which has the highest number of cases in Illinois outside of Chicago, have said they need at least 200 additional contact tracers and as many as 400 to supplement the work of the 29 currently on staff. Illinois has maintained a statewide stay-at-home order since late March, and Gov. J.B. Pritzker has said the state needs a “massive statewide contact tracing operation.”

On Monday, Miami-Dade County will begin to allow restaurants and stores to resume limited operations, joining the rest of Florida in an initial reopening. It’s unclear when the county — the state’s most populous and by far hardest-hit by COVID-19 — plans to bring on more contact tracers to assist the 175 staffers doing the work now.

“In Miami, we need definitely more than we have, but so far we have been able to manage the number of cases that we have to maintain a balanced activity in terms of contacting all the positive cases,” said Dr. Alvaro Mejia-Echeverry, a state epidemiologist for the county.

Contact tracing was one of the “core state preparedness responsibilities” outlined in the White House guidelines for reopening the country, but governors have been pressing ahead with lifting restrictions without having comprehensive programs in place.

Hall County, which has over 200,000 residents and the second-highest rate of coronavirus cases in Georgia, has between 30 and 40 contact tracers assigned to the local public health district, which also serves a dozen neighboring counties. It hopes to receive an additional 30 from the state.

Georgia was among the first states to ease restrictions. Public health experts have expressed concern that the state was risking a spike in cases by moving too quickly. So far, the state has hired 250 contact tracers with a goal of reaching 1,000.

During congressional testimony, this past week, the nation’s top infectious disease expert, Dr. Anthony Fauci, reiterated his concern that parts of the US might be easing restrictions too early without having the ability to respond effectively to an increase in cases with “good identification, isolation and contact tracing.”

The next day, the Centers for Disease Control and Prevention released general guidance to states on contact tracing. It said the number of case investigators and contact tracers needed in each community “may be large” and will vary, in part due to caseloads.

The document was released two-and-a-half weeks after Georgia and other states began lifting restrictions. It included recommendations on how to prioritize cases when staffing is limited and said communities that don’t have the capacity to investigate a majority of their new cases will have to consider reinstating measures such as stay-at-home orders.

Under California’s criteria for a broader reopening, counties should have 15 people trained in contact tracing for every 100,000 residents. The state is helping, working to train between 10,000 and 20,000 tracers, but most large counties are falling short.

San Diego County, home to 3.3 million people, had 171 contact investigators on the job with plans to have 450 as soon as possible. In Orange County, which has about 3.1 million residents, about 75 staffers are assigned to investigating cases and tracing contacts.

Harris County, Texas’ most populous with more than 4.7 million residents, is working to train about 300 contact tracers by May 22. It’s been two weeks since Texas reopened retail, restaurants, malls and movie theaters to limited numbers of customers.

Harris County Judge Lina Hidalgo, the county’s top elected official, said she is concerned the reopening is too fast and it may “make our work difficult and perhaps impossible.”

In Philadelphia, the Department of Public Health has trained a small number of contact tracers and wants to hire more to be deployed once the number of new infections has dropped enough to make contact tracing practical, spokesman James Garrow said.

A few states, including Utah, made contact tracing a priority before beginning to ease restrictions. In early April, Massachusetts launched a $44 million effort and enlisted Partners in Health, a Boston-based nonprofit known for its healthcare work in developing countries, to hire and train 1,600 people. They were to supplement the more than 600 case investigators already doing the work at the local level.

“If anything can be learned from Massachusetts’ experience, it’s that the process takes time and states need to start ramping up their contact tracing efforts well before reopening their economies,” said Dr. Joia Mukherjee, chief medical officer at Partners in Health. “We should have done this on day one.”