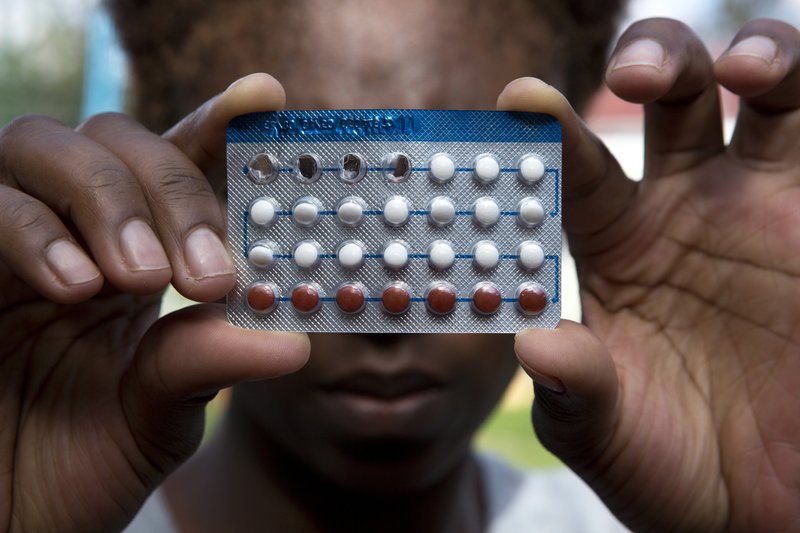 A woman holds a packet of contraceptive pills, in Harare, Thursday, April 9, 2020. Lockdowns imposed to curb the coronavirus’ spread have put millions of women in Africa, Asia and elsewhere out of reach of birth control and other sexual and reproductive health needs. Confined to their homes with husbands and others, they face unwanted pregnancies and little idea of when they can reach the outside world again. (Photo: AP)

The callers were in tears. One by one, women in homes across rural Zimbabwe had a pleading question: When would family planning services return?

Lockdowns imposed to curb the coronavirus’ spread have put millions of women in Africa, Latin America and elsewhere out of reach of birth control and other sexual and reproductive health needs. Confined to their homes with their husbands and others, they face unwanted pregnancies and little idea of when they can reach the outside world again.

In these uncertain times, women “have to lock down their uterus,” Abebe Shibru, Zimbabwe country director for Marie Stopes International, told The Associated Press. “But there is no way in a rural area.”

Eighteen countries in Africa have imposed national lockdowns, according to the Africa Centers for Disease Control and Prevention. Rwanda, the first country in sub-Saharan Africa to impose one, has extended it in a possible sign of things to come.

Even where family planning remains available, providers say women fear venturing out and being beaten by security forces and accused of defying the restrictions. Meanwhile, outreach services, key to reaching rural women, have largely stopped to avoid drawing crowds and the risk of workers spreading the virus.

The International Planned Parenthood Federation, or IPPF, in a new report Thursday says more than one in five member clinics have closed because of the pandemic and related restrictions, including more than 5,000 mobile clinics across 64 countries. Most are in South Asia and Africa, but Latin America and Europe have seen hundreds of closures as well.

From Pakistan to Germany to Colombia, IPPF members say they have scaled down HIV testing and gender-based violence response work and face shortages of contraceptives.

“They have needs that cannot wait,” IPPF director-general Alvaro Bermejo said of women in a statement, pleading for governments’ help to provide protective equipment to allow for intimate care.

For most people, the coronavirus causes mild to moderate symptoms such as fever and cough. But for some, especially older adults and the infirm, it can cause pneumonia and death.

In Europe, 100 non-governmental groups on Wednesday called on governments to ensure reproductive health services, saying many facilities have sharply reduced them or shut down.

The predicted baby boom in Africa alone, even as birth rates have dropped in many countries as more girls are educated, will add to the growth that already is projected to see the continent of 1.3 billion people double in population by 2050.

In Zimbabwe, Marie Stopes provided more than 400,000 women last year with family planning services, Shibru said, including averting nearly 50,000 unsafe abortions. But now outreach services, which reach more than 60% of clients, are suspended. Even at clinics that remain open, clients have dropped by 70%.

That leaves a country of men, no longer free to work in the fields or elsewhere, confined with their wives for weeks on end.

“Husband and wife, what else can they be doing in that house?” asked Future Gwena, a Marie Stopes outreach worker. “I think we’re going to have a lot of pregnancies and, unfortunately, unintended. And most will result in unsafe abortions, domestic violence. Our community is paternalistic. If something goes wrong in the home, it’s the mother’s fault, even if the man initiated it.”

In Venezuela, thousands of women who once turned to neighboring Colombia for birth control or other reproductive health support are blocked after the border closed to help reduce the virus’ spread.

“Devastating,” she said of the disruption. “Women don’t stop giving birth just because there is a pandemic.”

Meanwhile, travel restrictions and manufacturing slowdowns in Asia mean that some family planning providers are waiting for shipments of emergency contraceptives and other items as stocks run short at home.

“Today I expected a shipment from Asia, but it’s suspended,” Shibru said. “I don’t know how to fill that gap. It was supposed to come today to serve us for the coming six months. So this is one of the tragedies. ... We’re expecting a huge shortage of contraceptives in African countries. Absolutely, condoms also.”

In Uganda, Marie Stopes country director Carole Sekimpi said they don’t know when a shipment of emergency contraceptives will arrive because India, their source, has also locked down. They’ve been out of stock for a month and need oral contraceptive pills as well, she said.

“Yesterday when I heard (neighboring) Kenya talking about a lockdown in Nairobi and (the port of) Mombasa I thought, ‘My god, what’s going to happen to all of our shipments?’” she said. “Overall, there’s definitely going to be a problem.”

She worried about the girls and women confined in homes with potential assailants, even uncles or cousins. Her organization has suspended outreach, which provides about 40% of services, and clinics have seen a drop in client traffic of about 20%.

Even the capital, Kampala, has been affected. Sekimpi said she visited a large government-run hospital there on Monday, “but when I got there my heart was broken because the one service suspended was family planning. With good reason, because it’s usually crowded.”

She expects not only a baby boom but a rise in unsafe abortions and post-abortion care, along with panicky women seeking to remove their IUD (intrauterine device) or birth control implant earlier than expected as they fear no family planning worker will be around to help them later.

Even the U.S. Embassy in Uganda has taken note of the challenges women face, tweeting that “Periods don’t pause for pandemics” and sharing advice on how to make washable sanitary pads at home.

The range of issues is similar across Africa, Shibru in Zimbabwe said, citing a daily call with country directors in Ethiopia, Kenya, Malawi, Madagascar and elsewhere.

“Look, everything has been diverted to COVID,” he said of the disease caused by the coronavirus. “But after COVID, another catastrophe will be women’s health, unless something is done right now.”