CULTURE London exhibition shows subversive side of the t-shirt

London exhibition shows subversive side of the t-shirt 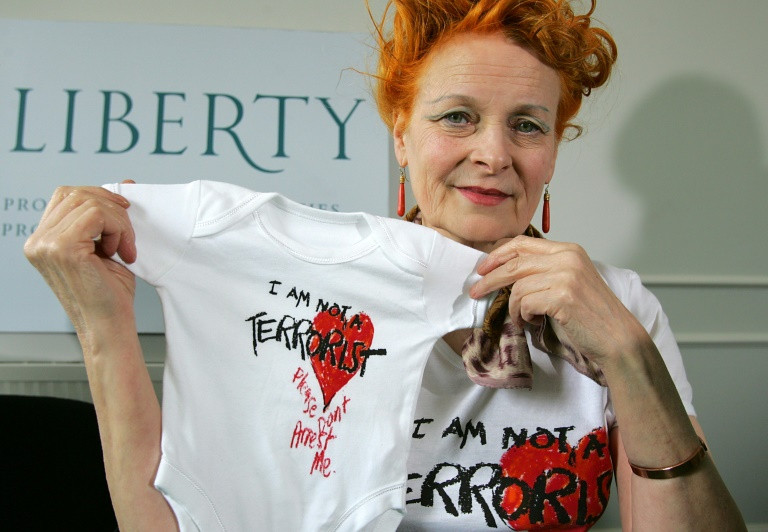 British fashion designer Vivienne Westwood uses t-shirts in her collections and catwalk shows, the garment is the subject of the 'T-shirt: Cult-Culture-Subversion' exhibition on show in London from February 9

A wardrobe staple, the t-shirt is being celebrated in a London exhibition as a master communication tool used to carry subversive and campaigning messages to the world.

"T-Shirt: Cult - Culture - Subversion" opens on Friday and runs to May 6 at London's Fashion and Textile Museum, where more than 100 t-shirts trace the impact it has had on popular culture and society in recent decades.

"Since its earliest incarnation at the start of the 20th century, the t-shirt has served as a means to broadcast social, musical and political passions," the museum declared.

The humble t-shirt was introduced to the US Navy kit list in 1913, as a short-sleave white cotton undervest, but the term "t-shirt" didn't make it to the Merriam-Webster Dictionary until 1920.

Gaining popularity through the decades, it hit the Hollywood big time in 1951 by clinging to the chest of actor Marlon Brandon in "A Streetcar Named Desire".

But the t-shirt has also been harnessed for political and social campaigns, on everything from the environment to gay rights, as a simple tool able to be reproduced on a mass scale.

"It's the kind of most democratic form of clothing, but also with the use of silkscreen you can reproduce messages over and over," said Dennis Nothdruft, head of exhibitions at the museum.

Punk fashion priestess Vivenne Westwood harnessed the t-shirt in 1977, printing an image created by artist Jamie Reid with "God Save The Queen" scrawled across a portrait of the British monarch.

"The Queen is a sacred object in England, so just to do that was such a shock to the system," Nothdruft said.

Westwood has continued to use t-shirts in her collections and catwalk shows, in 2012 printing her own portrait with "I am Julian Assange" written on it in reference to the WikiLeaks founder.

An image of cartoon Mickey Mouse in front of the cloud of an atom bomb was used in 1976 as a critique of US policies by artists John Dove and Molly White. The t-shirt was deemed "anti-American" by Disney, which according to the exhibition forced the designers to stop selling it.

Other artists who have printed their views onto t-shirts include Keith Haring, the celebrated American street artist, who created the "Ignorance = Fear, Silence = Death" image in 1990.

It was designed for the organisation Act Up, as part of a campaign against homophobia and a lack of knowledge about AIDS.

The t-shirt shows no sign of falling out of fashion, with politically-charged messages such as artist Jeremy Deller's 2017 approach to Britain's departure from the European Union.

The exhibition also explores how the clothing is used by luxury brands such as Dior, which last year created a "We Should All Be Feminists" t-shirt using the title of a book by Nigerian author Chimamanda Ngozi Adichie.

Another exhibit -- "No More Page Three" -- brought the protest against topless models in The Sun tabloid to the heart of Britain's political establishment.

MP Caroline Lucas wore the t-shirt to parliament in 2013, only to be told her clothing was not in line with regulations, according to the exhibition.

She held up an image of one of the page three models, and replied: "It strikes me as an irony that this t-shirt is seen as offensive."