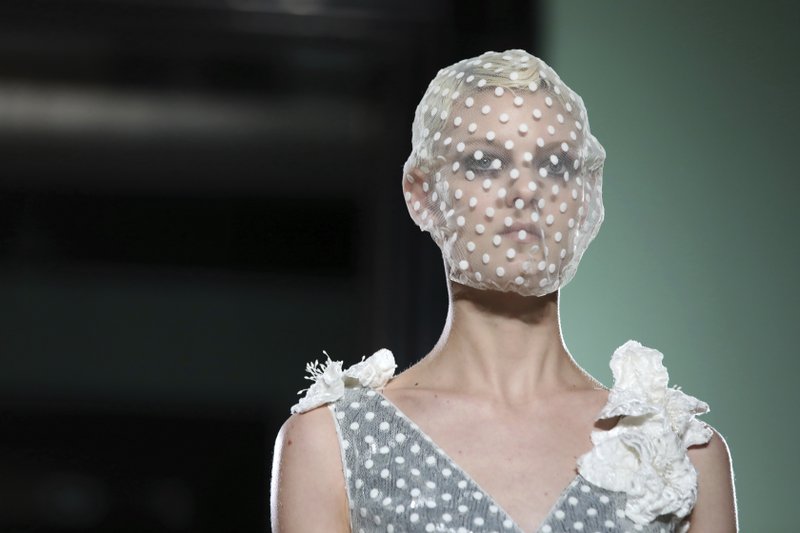 London Fashion Week saw a flurry of shows Monday emphasizing romance and femininity, often with exquisite workmanship and dashes of mystery and drama.

Canada-born designer Erdem Moralioglu turned the National Portrait Gallery in Trafalgar Square into a showcase for his gorgeous contemporary designs, which featured long, elaborately made dresses, many with floral themes offset by a black background.

Kane went “old school” for his London Fashion Week show with a collection that overtly referenced two 70s’ classics: “The Joy of Sex” and “More Joy of Sex” books.

“I have never shied away from sex in the collections and this one is no different,” said Kane. “Since the beginning, I have found it fundamental to our idea of women. Women with their own power who create their own worlds.”

Anyone who missed the point was reminded by the none-too-subtle voiceover on the soundtrack encouraging people to experience more joy, more play and more sex.

Many of Kane’s dresses were semi-sheer and lacy, in simple but effective blacks and reds, along with some relatively demure knitwear, including an impressive deep purple dress. Kane made very effective use of black set off with silver, as well as primarily black outfits that seemed to shimmer with color.

Pants were sometimes ripped or had fabric cut out and some blouses and dresses sported horizontal “peekaboo” slits. Kane used a wide variety of materials, including cotton canvas coats, raw wools and crushed velvet.

There was an unexpected evacuation of the Tate Britain Museum several hours before the Christopher Kane show, sending visitors — and models — into a light rain outside while security was checked.

The models were rained on for about 20 minutes before the security alert was lifted, creating some challenges for makeup artists and stylists preparing for his showcase event.

Erdem’s London Fashion Week show made heavy use of veils — and black veil material — not only to shade the faces of many models but also as the fabric for leggings, long gloves and some shawls and capes.

The veil material was detailed with black polka dots that became a design motif throughout the show, giving the models an unearthly and sometimes off-putting look when their faces were totally obscured.

A few outfits had retro flair, including some silver metallic skirts that evoked the flapper era, and some fused Asian designs that gave the show an international feel. Colors were rich and vibrant and the floral designs were complex and evocative.

The show, with American Vogue editor Anna Wintour in her customary front-row seat, showed a remarkably uniform approach to design, each piece reinforcing and building on the look.