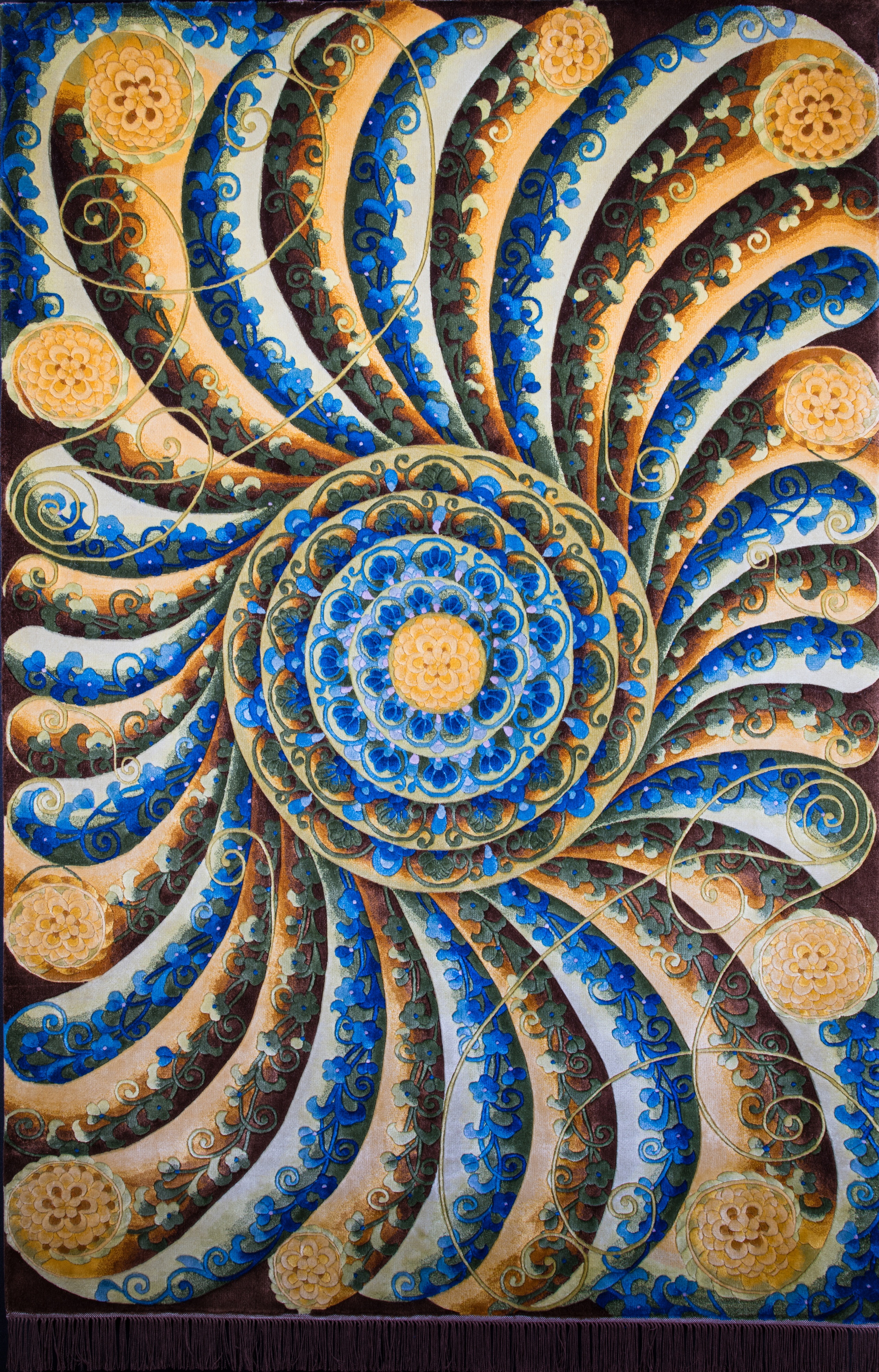 Silk carpets of intricate and manifold designs may most commonly be associated with Persia, but it's worth remembering that the Silk Road started in China, where silk carpets of distinction have been made for millennia.

The heritage craft continues today at a factory in Fengjing Town of Jinshan District that produces handmade silk rugs, carpets and tapestries.

"Our silk rugs and carpets are as brilliant as those made in Iran," says Cheng Meihua, 68, director of Shanghai Jinshan Silk Carpet Factory, which was established in 1986.

The enduring art of Chinese silk carpets has a long history. The great poet Bai Juyi of the Tang Dynasty (AD 618-907) wrote in his poem "Hong Xian Tan," or "Red Thread Carpet," that a silk carpet of about 3 meters in length required about 50 kilograms of silk. Silk carpets made in what is today the city of Xuancheng in Anhui Province were sent as tributes to Tang emperors. 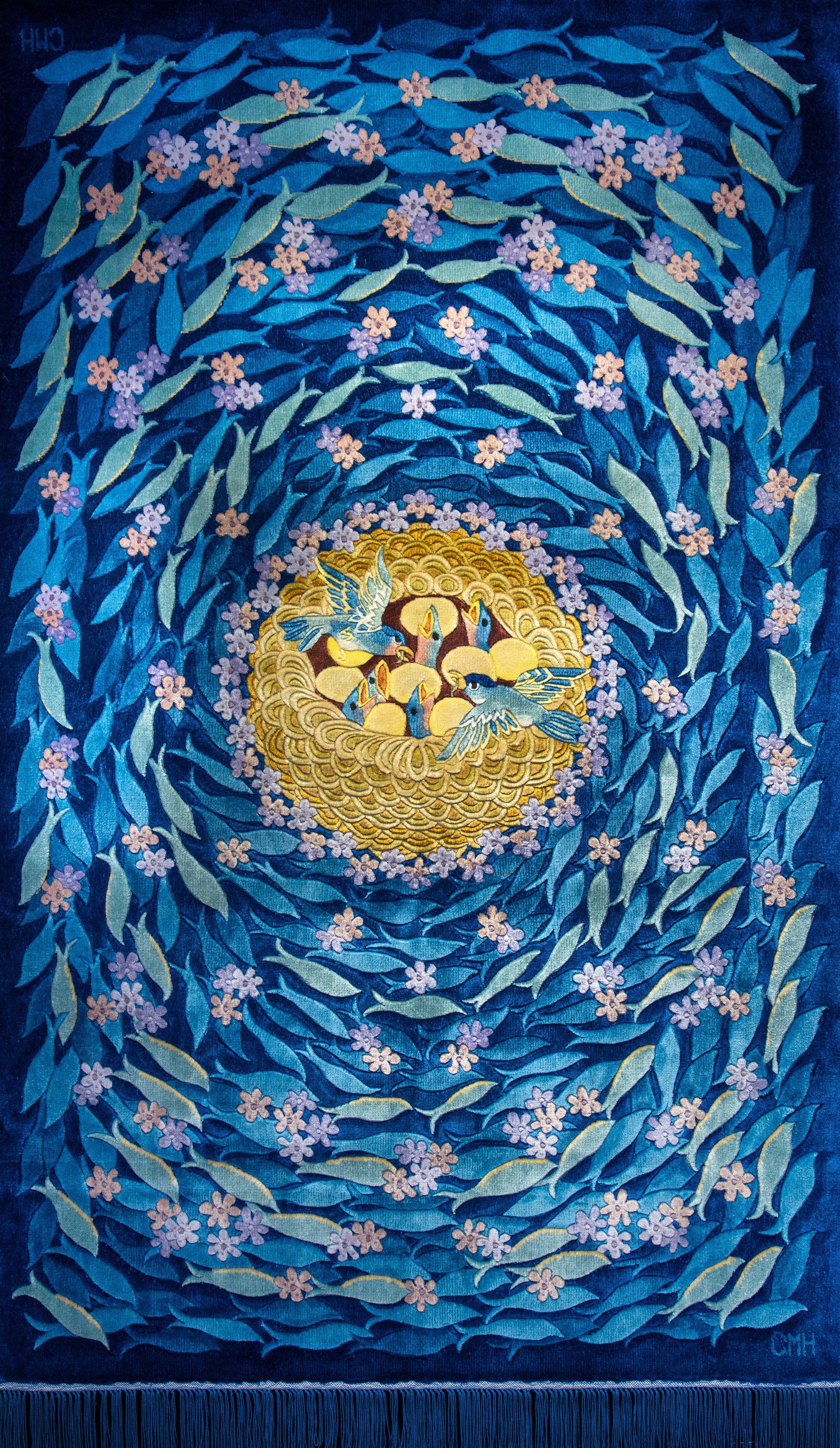 According to the Office of Shanghai Chronicles, the city's first factory producing silk carpets was called Hengfengyong, which was located near the Jing'an Temple. In 1922, the factory made a dupion silk carpet measuring 3.6 meters long and 2.74 meters wide at the request of a customer. Dupion silk is a plain weave, mulberry silk created with the threads from two different silkworms. The exquisite artifact took four weavers two months to complete. 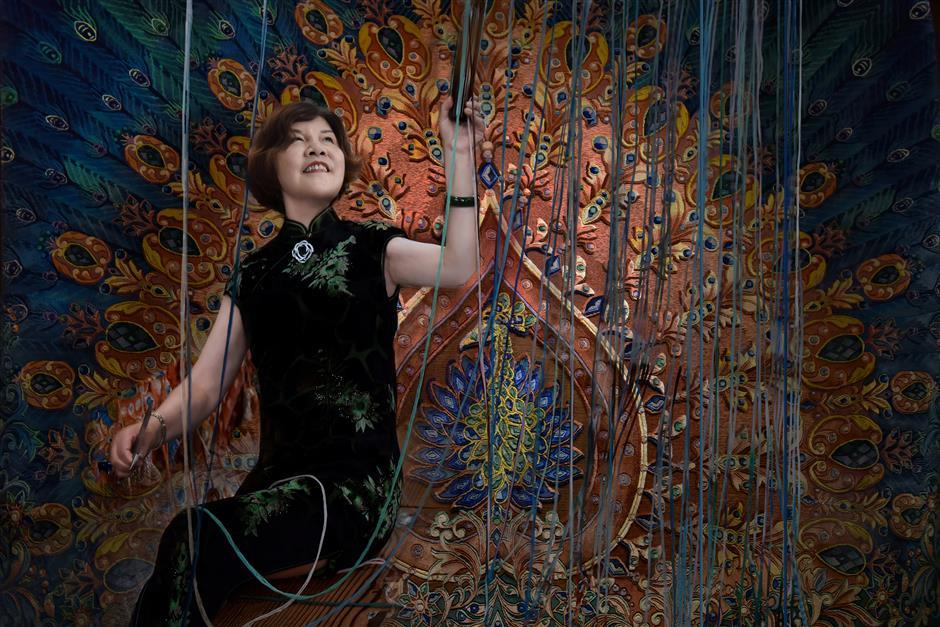 Cheng Meihua devotes her life to the art of the silk carpet.

Cheng, who hails from Jiangsu Province, was introduced to silk carpets when she was 20. At that time, she had two work choices: a local machinery plant or a local silk carpet factory.

"Without hesitation, I chose the latter because carpets were much more colorful than machines," says Cheng. "At the very beginning, I was assigned to do the work in the back-end of the line. However, I became interested in weaving as I watched weavers making silk carpets, so I asked the factory to change my work assignment. To be honest, I never thought that weaving a carpet would be so hard."

Now, 40 years later, Cheng cannot clench the fingers of her left hand because of that hard work.

Starting her career at the Jiangsu Rugao Silk Carpet Factory in 1974, Cheng showed herself to be talented and hard-working. The first silk carpet she made was recognized as first-class. In 1980, she moved to Shanghai and became a founding member of what came to be called Jinshan silk carpets.

The making of a silk carpet consists mainly of 12 steps, including design, color matching, dyeing, weaving and trimming.

To show me the process, Cheng walks me through the factory.

In the first room we enter, several spinning wheels spin yarn from silk fibers. The factory, Cheng explains, uses tussar silk, which is produced from larvae of silkworms from Dalian in Liaoning Province. Back in the 1980s, it used dupion silk.

I am confused. I thought dupion silk is better than tussar silk.

"Dupion silk is indeed glossier than tussar silk, but it's too soft for carpet making, let alone that it's in short supply and costs the earth," Cheng explains. "Tussar silk is bleached and degreased before using it, and it becomes stretchier than dupion."

According to Cheng, the factory began research and development on tussar silk in the 1990s. Thanks to that, the price of tussar silk has risen sharply.

Originally, all the silk carpets made at the factory were rectangular, but now they come in a variety of shapes. Some of the silk carpets are for floor use; others as decorative wall hangings. Some silk carpets look three-dimensional because craftsmen use electric scissors to cut the fabric in layers. Silk carpets often become family heirlooms.

"Before 2014, our silk carpets were mainly exported to foreign countries like Russia," says Cheng. "The Russian customers really trusted us and our products were exempt from inspection. However, a change in the geopolitics resulted in the drop in orders. So we have concentrated on the domestic market."

Patterns matter. Cheng's team has creatively applied the popular local art of Jinshan farmer paintings to the silk carpets. Instead of following traditional patterns, like two dragons playing with a pearl, Cheng creates a series of silk carpets of plain colors and geometrical designs.

We move on. In the second room are three rows of looms, which are wooden frames that hold the silk carpets while they are being woven. A female weaver is working on a silk carpet that features a boat battered by strong winds. She ties knots between adjacent warp threads, using a knife to cut strands. After the completion of a row of knots, she uses a special comb to press the weft and knots tightly together to make the silk carpet even.

Countless rolls of yarn sit on the floor. According to Cheng, a silk carpet can feature up to thousands of hues, an exclusive feature of the Jinshan Silk Carpet Factory. 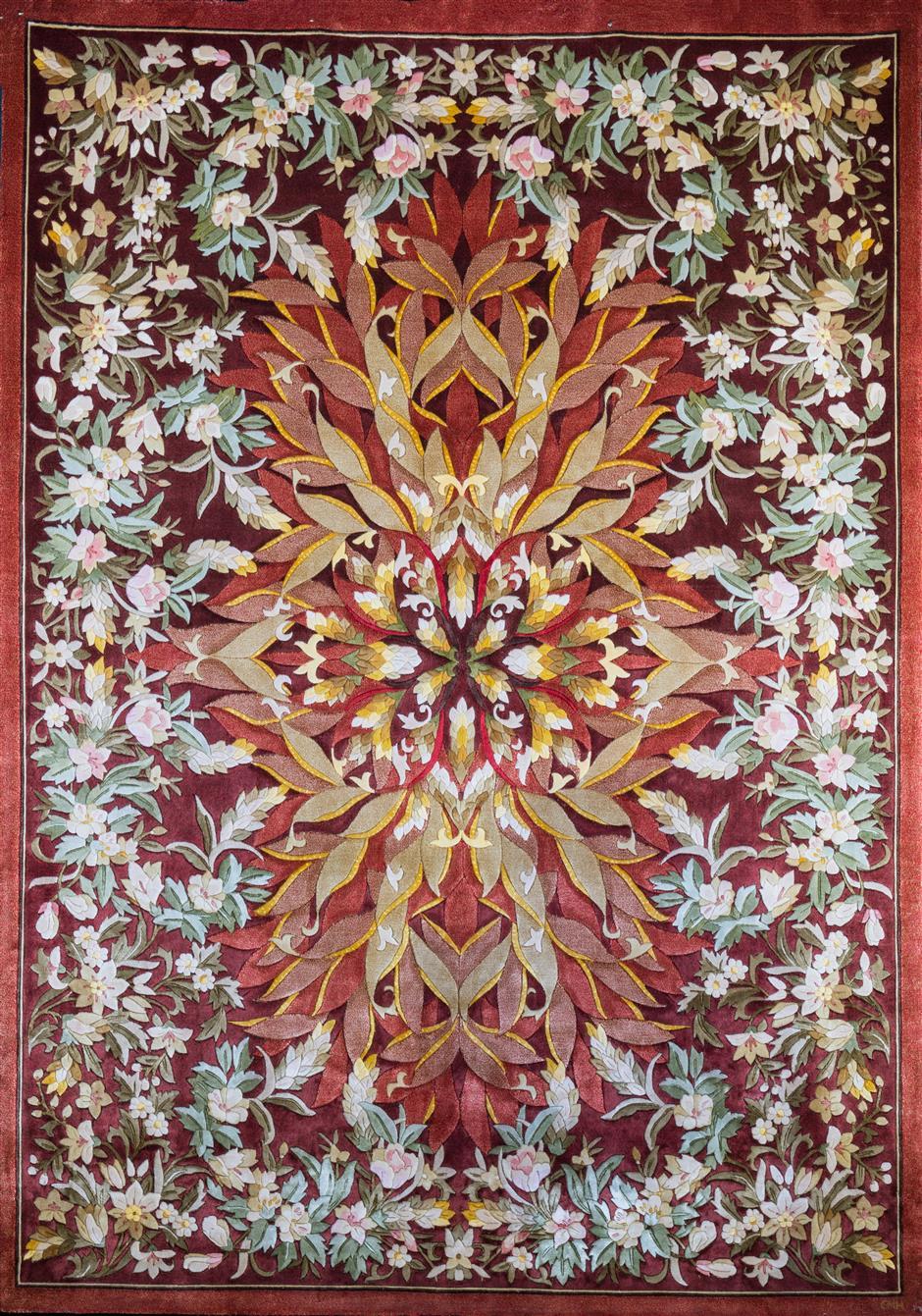 Stunning silk carpets with unique designs and spectacular hues are exhibited in the factory showroom. The luxury of the handmade silk carpets epitomizes Cheng's enduring love of the art.

One of the exhibits, which looks a little old, is a replica of the gift sent by the Chinese government to the United Nations Children's Fund in the 1980s. Entitled "Peace and Spring," the original silk tapestry is displayed in the UN headquarters in New York.

Another silk tapestry, entitled "Prosperity," features 288 golden carp swimming in a sea of peonies. It was once exhibited at the summit of the Asia-Pacific Economic Cooperation group in Beijing in 2014 and at the first China International Import Expo in Shanghai in 2018. This exquisite artifact comprises 633,600 knots and 950,400 threads of silk.

"Behind the beautiful artifacts are blood, tears and sweat," says Cheng. "I have devoted my life to the art of the silk carpet. It is like a long march that never ends."