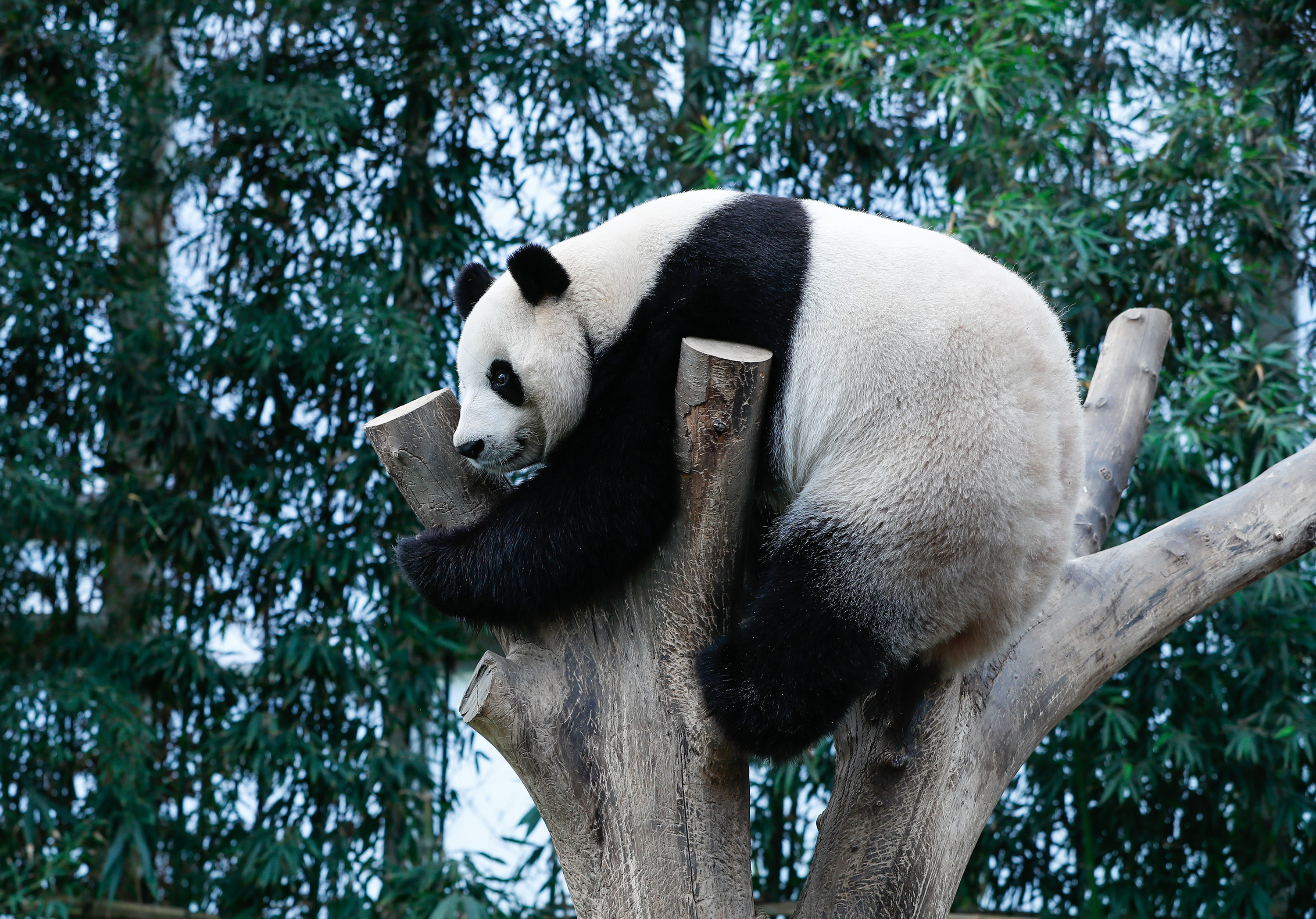 MOSCOW, June 6 (Xinhua) -- "I heard groups of children passing by and shouting: 'Pandas! Pandas!' They want to see them as soon as possible," said Svetlana Akulova, director general of the Moscow Zoo.

She was standing in a newly built panda house. Behind her are soundproofed windows. Looking through the windows, one can see two giant pandas, each playing in its own room.

Inside the house are wooden climbers, swimming pools, and recreational toys among other things, all intended to create a comfortable and healthy living environment for the new ambassadors of China-Russia friendship.

The pair, three-year-old male Ru Yi and two-year-old female Ding Ding, arrived in Moscow in late April from China's southwestern province of Sichuan. They will start a new life and hopefully a family in the Russian capital.

They were formally handed over to Russia for a 15-year joint research program on Wednesday at an opening ceremony for the panda house, which was attended by visiting Chinese President Xi Jinping and Russian President Vladimir Putin.

"The Moscow Zoo has built a panda house fully meeting the requirements to keep the animals," Akulova said.

The red lanterns strongly suggest a Chinese flavor, in addition to Chinese ink landscape paintings. In the yard, the green bamboo groves are panda necessities.

As part of their old diet, fresh bamboo and bamboo shoots are delivered every week from Sichuan, and kept fresh and prepared in special rooms with large freezers.

Keeping the pandas healthy is an important task, and currently panda keeper Wang Pingfeng and vet He Ming from the China Conservation and Research Center for the Giant Panda are here to give a hand.

Wang said several Russian workers at the zoo are trained to take care of the pandas and are able to conduct comprehensive physical examinations.

"The pandas are getting used to the new environment and their new life here," Wang said, adding that the local weather is drier than what the pandas are accustomed to.

Muscovites have shown great interest in the panda pair, and the zoo expects huge inflows of visitors after the panda house is open to the public.

"These animals are really unique," said a 33-year-old visitor to the Moscow Zoo who gave her name as Anastasia. "I'm sure all people in Moscow would like to come to see the pandas."

Many see the pandas' arrival as symbol of the solid friendship between China and Russia, especially since it coincides with the 70th anniversary of bilateral diplomatic relations.

"I think it's a very good sign of friendship, because animals are always associated with friendship, kindness and openness. Plus in this case, there will be serious research work. Nobody knows how well they will live here and how it can affect their ability to breed," said a visitor from St. Petersburg who called herself Osipova.

The joint research work on the life of Ru Yi and Ding Ding at the Moscow Zoo in the next 15 years under a bilateral agreement aims to bolster efforts on both sides to protect endangered species and biodiversity.

"We are very proud of our part in the initiative aimed at protecting nature and in the study of rare animal species like the giant panda. It is one of the most important scientific activities by the zoo," Akulova noted.

Studies on multiple topics will be carried out according to a joint working plan. A large team of scientists, zoologists and keepers is involved in the joint mission.

"I hope that our Ding Ding and Ru Yi will provide us with plenty of scientific findings," said Akulova.

In her eyes, the timing that this year marks the 70th anniversary of bilateral diplomatic relations makes the giant panda research program more meaningful.

"We have to remember that all these can happen partly thanks to the friendship between our peoples, and thanks to the wisdom of our leaders," Akulova added.

"I hope that year after year our friendship will become stronger and stronger," she added. "And I hope that we will be able to write more than one chapter of scientific research on this wonderful animal."