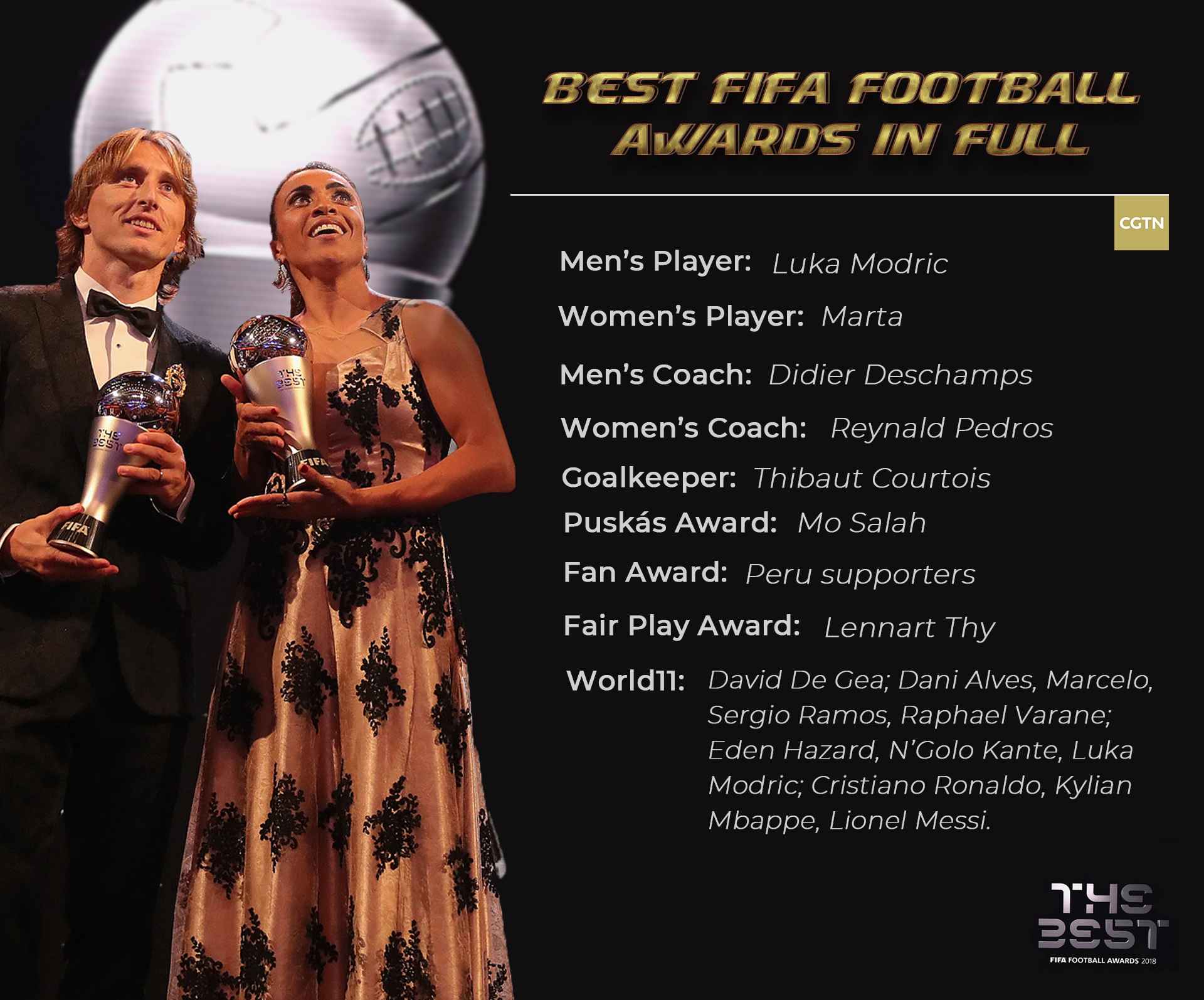 In a high-profile annual festival at London's Royal Festival Hall, The Best FIFA Football Awards Monday night was hosted as a soccer gala. Ambilight full surrounded, stars gathered, and a glittering ceremony was made in history.

The 33-year-old Croatia captain Luka Modric takes on the trophy from FIFA's president Infantine, with the leading honor lighting on a glorious moment of his life. FIFA Best Men's Player award of 2018, Modric made a real achievement this year and it was known all around the world.

Rise to the top

The midfielder led Real Madrid to a third consecutive Champions League title before winning Golden Ball as the best player at the World Cup this year, in which Croatia reached the final for the first time.

"It was an unbelievable season, the best season in my life," said Modric.

"This award is not just mine," Modric said. "It is my teammates' from Real Madrid and Croatia."

Before that, Modric has already been voted for Player of the Year for last season by UEFA, ahead of Cristiano Ronaldo, Mohamed Salah and Lionel Messi in the same way, becoming only the third player other than Ronaldo and Messi to win the award since it was introduced in 2011.

Also, Modric won the best player award at the World Cup tournament after leading Croatia national team to an incredible World Cup final in this summer.

"I'm still not realizing how good a year I had collectively, individually, and I'm very proud for everything I achieved this year and it will be remembered forever."

Goal of the year

Puskas Award, which was named after the Hungarian former Real Madrid player, is awarded to the goal of the year.

It was voted entirely by fans, with a total received of 38 percent by Egyptian and Everton striker Mohamed Salah.

Salah scored the goal during the Everton's Premier League match with Liverpool at Anfield last December.

FIFA and the worldwide players' union FIFPro announced the 55 nominees in contention for the FIFA FIFPro World11 2018 on September, 10. Modric was on the list together with his teammate Marcelo, Sergio Ramos and Raphael Varane. Cristiano Ronaldo and Lionel Messi were among the stars with no surprise.

Not a majority of people would like to imagine that it's midfield player Modric who eventually breaks the decade-domination of Ronaldo and Messi.

For the first time in 12 years, Messi was not among the finalists with third place going to Salah for his incredible 44-goal debut season with Liverpool that carried the Reds to the Champions League final.

Both Ronaldo and Messi have announced that they will miss the ceremony one day ahead.

Over the past decade, Ronaldo and Messi have taken 10-times world best player. The two legends won five trophies each, equaling in terms of quality. However, Messi had won five awards by 2015, while Ronaldo has been chasing all the way, and finally caught up.

The Best FIFA vs Ballon d'Or

FIFA decided to end the association with Ballon d'Or prize since 2016, which was awarded by France Football magazine since 1956.

The Ballon d'Or, which was only voted by worldwide journalists, has ever been merged to Best FIFA Football Award from 2010 to 2015.

For the first time, online poll of fans has been added to the Best FIFA Football Award.Players and coaches categories was conducted by national team captains and managers, selected journalists from all over the world will be included. Each category has a 25% in total.

The nominees for 2018 Ballon d'Or will be released on October. Whether Ronaldo & Messi continue their domination or the newly FIFA's best player Modric becomes one, let's wait to see it.