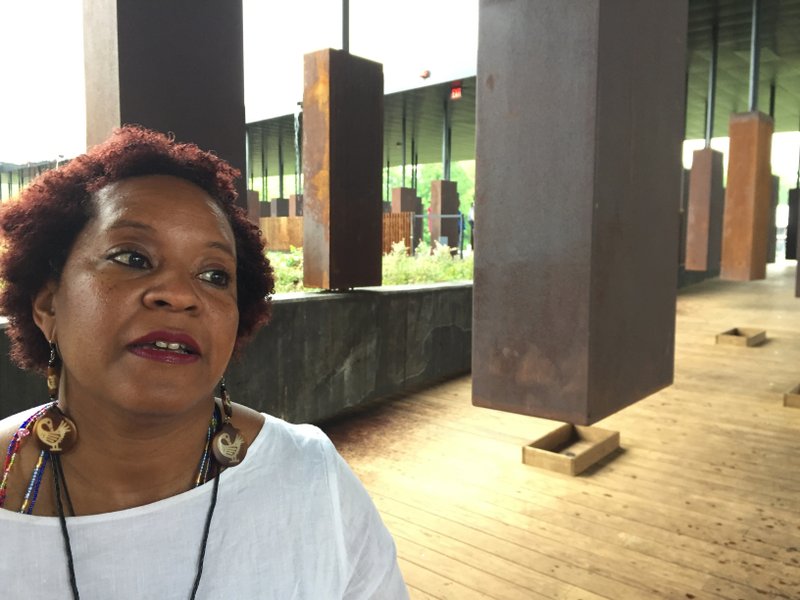 Toni Battle stands inside a display at the National Memorial for Peace and Justice (Photo: AP)

Hundreds of people lined up in the rain to get a first look at a lynching memorial and museum that opened Thursday in Montgomery, Alabama.

The National Memorial for Peace and Justice commemorates 4,400 black people who were slain in lynchings and other racial killings between 1877 and 1950. Their names, where known, are engraved on 800 dark, rectangular steel columns, one for each U.S. county where lynchings occurred.

A related museum is also opening in Montgomery, called The Legacy Museum: From Enslavement to Mass Incarceration.

Many visitors shed tears and stared intently at the commemorative columns, many of which are suspended in the air from above.

Toni Battle drove from San Francisco to attend. “I’m a descendant of three lynching victims,” Battle said, her face wet with tears. “I wanted to come and honor them and also those in my family that couldn’t be here.”

Angel Smith Dixon, who is biracial, came from Lawrenceville, Georgia, to see the memorial.

The Rev. Jesse Jackson, a longtime civil rights activist, told reporters after visiting the memorial that it would help to dispel America’s silence on lynching.

The crowd included white and black visitors. Mary Ann Braubach, who is white, came from Los Angeles to attend. “As an American, I feel this is a past we have to confront,” she said as she choked back tears.

The summit, museum and memorial are projects of the Equal Justice Initiative, a Montgomery-based legal advocacy group founded by attorney Bryan Stevenson. Stevenson won a MacArthur “genius” award for his human rights work.

The group bills the project as “the nation’s first memorial dedicated to the legacy of enslaved black people, people terrorized by lynching, African Americans humiliated by racial segregation and Jim Crow, and people of color burdened with contemporary presumptions of guilt and police violence.”