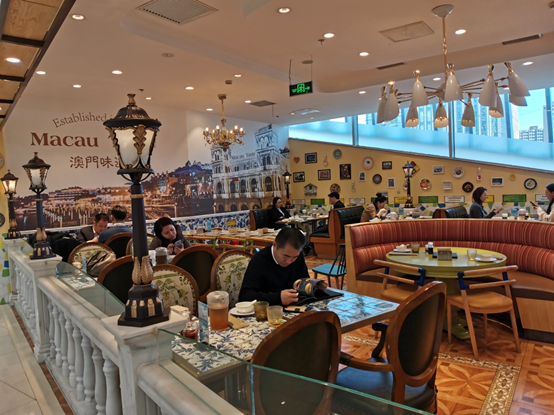 Macao food is considered close to Hong Kong food. But the number of Macao restaurants seen on the Chinese mainland are far fewer than their Hong Kong counterparts. Macanese food is influenced by Chinese, Portuguese, Malay, Indian and African cuisines.

The Macao Taste restaurant in Beijing is always full with customers during mealtimes. It serves Macao dishes exclusively and it has gained quite a fan base in its neighborhood in a busy downtown area. Miss Run Shasha and her friends are frequent customers here. "We have meals here quite often," she said. "The pineapple bun is my favorite. I think this dish could be a reference to tell whether a Macao or Hong Kong restaurant is good or not. And it's quite well cooked here."

Pineapple bun, curry fish balls, Portuguese curry chicken and pork chop bun. These typical Macao dishes are also bestsellers here among Beijing customers. But the recipes might have been developed in a slightly different way. According to Chef Wang Liang who has been at the restaurant for eight years, the restaurant is always adjusting the menu and taste to meet customer demand. He said, "People living in the north like stronger tastes than people in the south. So we have to split the difference but keep its origins as well. Meanwhile, residents in Macao love sweet desserts, like egg tarts. But it's too sweet for our customers here.”

Decorated with typical Macao symbols, Macao Taste has been operating in the mainland for 11 years, developing from a small restaurant into a chain. "At the beginning of the 21st century, people came to our restaurant out of curiosity about what Macao food is," says Meng Lu, deputy marketing director. "But it's changed in recent years as more and more people travel to Macao. Customers do come here for food. They even give us advice on developing new dishes that they like."

That's what has changed over the past 20 years since the handover of Macao's sovereignty. From the unfamiliar to a well-blended mix – and not just in food, but in other aspects as well.