MacKinnon scores in OT, Avalanche beat Flames to even series 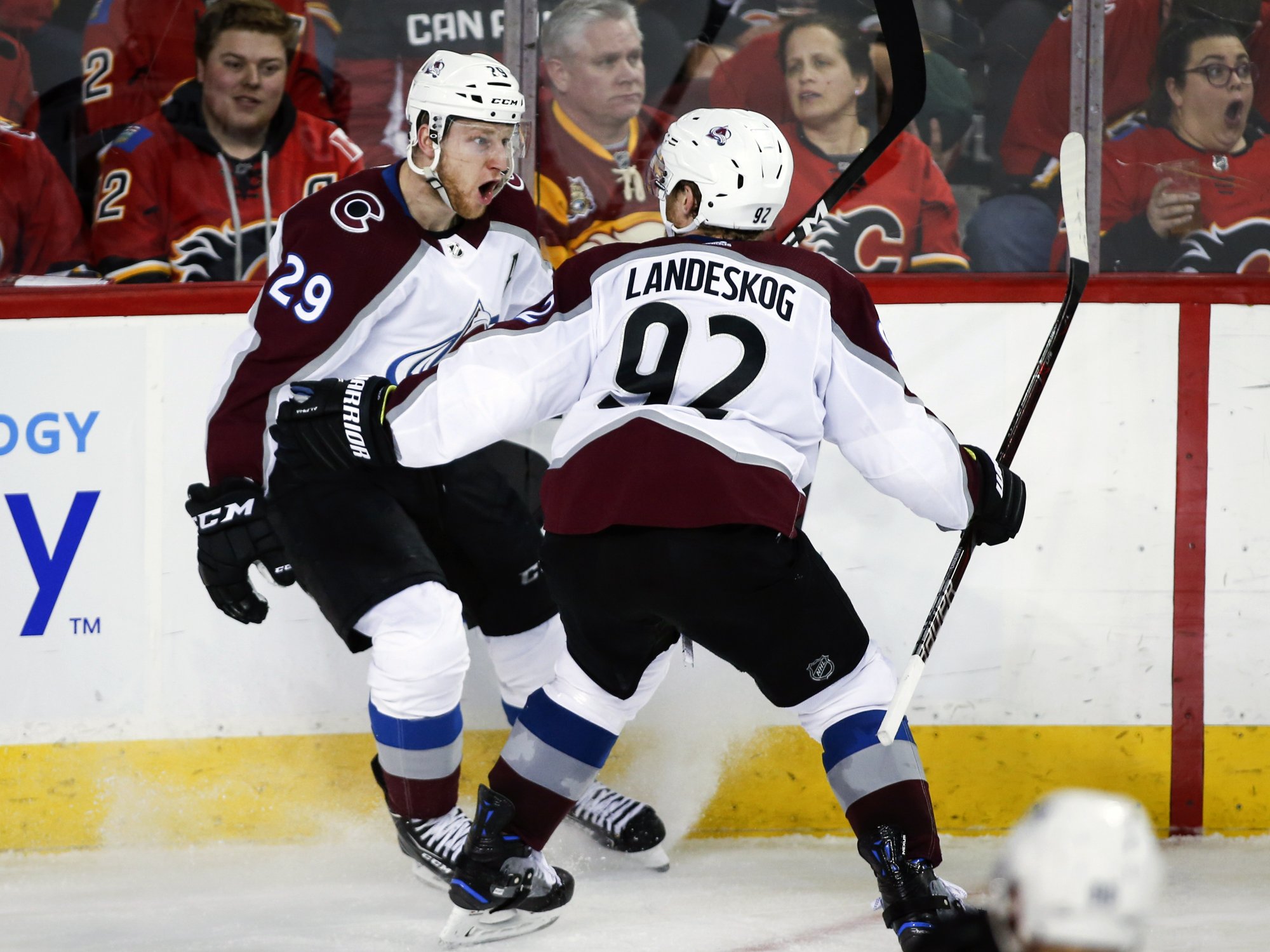 Nathan MacKinnon came through in the clutch for the Colorado Avalanche — and again showed why he’s one of the NHL’s best players.

A force all night, MacKinnon scored 8:27 into overtime as the Avalanche tied their first-round series with the Calgary Flames at a game apiece with a 3-2 win.

After Philipp Grubauer stopped Michael Frolik at one end, the puck went up ice where a pass from Mikko Rantanen sprung MacKinnon down the left wing and the 23-year-old Avs center fired a perfect shot into the top corner on Mike Smith.

“Mikko and I tried to get ahead of their (forward) that was on me,” MacKinnon said. “I got a step and Mikko made a great pass — a little saucer pass. I managed to get another step on that weak-side D to get a shot off and I put it where I wanted to.”

The snipe left his teammates, coach — and even the opposition — in awe.

“The guy’s a world-class player,” Smith said. “If you give him too many open looks, he’s going to find a way to get one past you, sooner or later. He ripped that one pretty good there. Obviously, you’d like to get a piece of it, but it is what it is.”

MacKinnon tied for the team lead in shots on goal with seven and he led both teams with 12 shot attempts. His 26:26 in ice time was third behind teammates Tyson Barrie (28:13) and Flames captain Mark Giordano (28:55), both defenseman.

“I’ve said it before: Nate’s a superstar and that’s what superstars do,” linemate Gabriel Landeskog said.

Grubauer finished with 35 saves, and Avalanche coach Jared Bednar said his team could easily be down two games if not for his goaltender’s performance.

“First of all, (Grubauer) makes the save and it’s a big save because of the time and the score and you’re in overtime and he made a lot of big saves tonight, as did Smith, but to give us that save at that time,” Bednar said. “Then we get up the ice and (Rantanen) and (MacKinnon) execute unbelievably and we get the goal.”

Matt Nieto and J.T. Compher also scored for the Avalanche.

Rasmus Andersson and Sean Monahan replied for the Flames.

“They seemed hungrier than us. Seemed like they wanted it more than us,” said Flames left winger Sam Bennett, who had two assists. “No one is happy with the way we played in the first couple periods. (Smith) bailed us out too many times to count. He’s been playing great and we’ve got to do a better job in front of him.”

Colorado tied it at 2 at 17:21 of the third period on Compher’s first career playoff goal, the result of some fortuitous bouncing of the puck.

Rantanen’s cross-ice pass banked off the skate of Gabriel Landeskog, then off both skates of Flames defenseman Travis Hamonic, before Compher shoveled a backhand over a sprawled Smith.

Monahan had given Calgary its first lead of the night at 12:27 of the third on some similar puck luck.

After winning a faceoff in the offensive zone, Monahan went to the front of the net. Johnny Gaudreau’s initial shot didn’t get through to the net, nor did Bennett’s shot attempt right after — but Monahan’s third try went into the top corner, over the glove of Grubauer.

The Avs were the better team most of the night, especially in a scoreless first period, outshooting Calgary 15-10 and taking it to the Flames physically.

But like in Game 1 when he posted a 26-save shutout, Smith was excellent once again.

The Avalanche’s best chance in the opening 20 minutes was Landeskog’s breakaway off TJ Brodie’s giveaway, in which Smith denied him when he tried to go five-hole.

In the third period with the score 1-1, Smith stared down Landeskog again on a breakaway and again denied him, this time with a blocker save. Chants of “Smitty! Smitty! Smitty!” were heard throughout the night from the crowd just like in the series opener.

In a second period of momentum swings, Calgary tied it at 1 at 12:26 on Andersson’s first career playoff goal. On a power play, Bennett backed out front from behind the net before zipping a no-look backhand pass across to Andersson, who had an empty net.

“We have to be better,” Giordano said. “We have to be a lot harder to play against and we know that. A tough way to lose, but there’s these moments all the time in the playoffs and you’ve got to deal with them and move on.”

Nieto gave the Avs their first goal of the series when he stripped the puck from Brodie at Colorado’s blue line and raced away on a breakaway, picking the top corner over Smith’s glove.

“We’ve always had the confidence in this room and tonight shows it,” Nieto said. “Down late or running into a hot goalie, we know we can win games against this team. We’re thrilled to be going back 1-1 and get back in front of that Pepsi Center crowd and try to get a lead in the series.”

NOTES: Smith finished with 36 saves, while Grubauer had 35. .. Calgary went 1 for 5 on the power play, while the Avs’ power play, which ranked No. 7 in the regular season, went 0 for 4 to fall to 0 for 8 in the postseason. ... Both teams used identical lineups from Game 1. ... Smith entered with a career .947 save percentage in the playoffs, making him the NHL’s all-time leader.