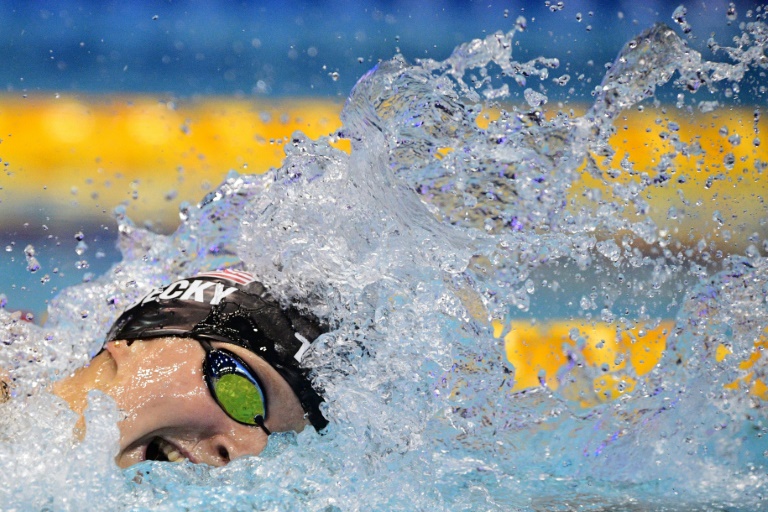 US swimmer Katie Ledecky bagged her third gold of the competition by pulverising the field in the women's 1,500m freestyle (Photo: AFP)

American swimmers completed a brutal Pan Pacific demolition job on their rivals Sunday by winning seven out of 10 gold medals on the final day of the pool competition.

Cate Campbell led the resistance as the Aussie darling won the women's 50m freestyle before producing an astonishing anchor leg in the 4x100m medley relay to finish with five gold medals and exorcise her Olympic demons in style.

"It's definitely been a near-perfect meet," said Campbell, who famously choked in the 2016 Rio final of the 100m freestyle as the hot favourite.

"All the clichés have been put to bed, the nightmares have gone," she added after putting down a marker for the 2020 Tokyo Olympics. "I'm having sweet dreams from now on."

Katie Ledecky scooped her third gold medal of the competition by pulverising the field in the women's 1,500m free, an event that has been added to the schedule for 2020.

The American world record holder, who won the 400m and 800m freestyle titles earlier in the meet, touched the wall in 15:38.97 with three swimmers still to turn for their final lap.

Ledecky welcomed the extra workload at the 2020 Olympics as the United States finished the pool competition with 18 gold medals, 10 more than Australia with hosts Japan third on six.

"I'm not planning on dropping anything," insisted the five-time Olympic champion, who was stunned by Canada's teen sensation Taylor Ruck in the 200m free.

"I'm very experienced at swimming those events and it's a challenge I enjoy. I still have a lot in me."

American Kathleen Baker captured gold in the women's 200m backstroke in 2:06.14, tipping out Ruck, who took silver for her fifth medal of the week.

Olympic champion Ryan Murphy credited his "lucky socks" as he made it four out of four on the night for the Americans by dominating the men's 200m backstroke, winning in a meet best 1:53.57 to complete the 100-200m double.

"I'm a little bit superstitious," revealed Murphy. "I always have the same peanut butter and jelly snack before every meet, the same (red, white and blue) socks. Hopefully that bodes well for me leading into 2020."

Campbell stopped the rot as the Australian defended her title in the women's 50m free, winning in a Pan Pacific record of 23.81 from American Simone Manuel (24.22) and countrywoman Emma McKeon (24.34).

Andrew clocked 21.46, almost half a second clear of Dressel.

Micah Sumrall made it six out of seven for the United States as she stormed to victory in the women's 200m breaststroke in 2:21.88.

Japan struck a blow for the underdog as world record holder Ippei Watanabe conjured an electric finish to win gold in a meet best of 2:07.75.

Having won individual gold in the 100m free, Campbell crushed it on the anchor leg of the women's 4x100m medley to blow past Manuel and bring the Australians home in 3:52.74, just edging out the American favourites.

"Is it completely unexpected? Probably not. But she had one of the best swimming weeks of her life."

Nathan Adrian edged Japan's Katsumi Nakamura in a rousing finale to give the Americans gold number seven by just five hundredths in the men's medley relay.