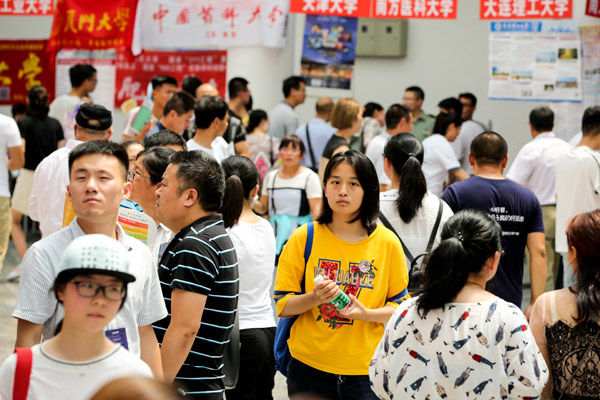 High school graduates and their parents attend a fair on career guidance and college majors held on June 26 at Huaiyin Normal University in Huai'an, Jiangsu province. Faculties from many universities aid students to choose their majors. [Photo by Zhang Zhaojiu/For China Daily]

After the stress of the college entrance exams, millions of graduates are facing an even bigger quandary about which university and academic path to choose next, Fang Aiqing reports.

Amid the searing heat of summer, around 10 million high school graduates have to keep a cool head about them to make one of the biggest decisions in their lives after the college entrance exams ended in early June.

They have to make a discerning choice about which university they want to attend and their choice of major based on their performance in the examinations.

Yet, the possibility remains that some of them will not be admitted to their chosen university or major, and end up being transferred to other specialties, or even fail to gain entrance at all.

And amid the flurry of opinions, guidance and suggestions about what to do next, graduates somehow have to form their own opinions on how to proceed-and stick to their decision.

The universities and majors welcoming those with the highest scores in the exams have always attracted public attention in China.

A recent survey showed that 236 out of 830 high school graduates with the best performances in the college entrance exams in their home provinces or autonomous regions from 2007 to 2016 chose to study business administration. Another 200 chose to major in economics, followed by 47 who chose electronics and information engineering.

In 2017, among the 63 students with the highest scores in their provinces or autonomous regions, 17 of them chose economics and management majors. Computer science also proved popular.

All the graduates enrolled with Tsinghua University or Peking University, apart from one who joined the Shenzhen campus of the Chinese University of Hong Kong.

A growing trend among top students saw them delay their decision on their specific majors and instead choose to study the liberal arts during their junior years, to give them a foundation across multiple disciplines before their interests and strengths become clear.

Some other students seem confident about their choice of subjects when it comes to making their decision.

Xu Jiazheng, one of the highest-scoring students in East China's Zhejiang province this year, says that he planned to apply for his favorite computer science at Tsinghua University, according to a report on thepaper.cn.

Zeng Zihan, who is waiting to apply to second-tier universities after disappointing exam results, says he wants to study a computer-related major and follow in the footsteps of his older cousin, who studied the internet of things.

Guo Jiameng, an examinee this year from Hebei province, says she plans to apply for a finance major at the Guanghua School of Management at Peking University, as she hopes the competitive environment will spur her on to achieve more.

However, sometimes students have to weigh up aspects outside their own interests.

One part of the examinations in Zhejiang province requires students to choose from three subjects out of six, namely: history, politics, geography, physics, chemistry and biology. Zeng ended up sitting chemistry, history and geography despite the fact that he plans to major in subjects relating to computer science or engineering rather than the humanities.

Lu Jialin wanted to apply to Zhejiang University, but didn't do as well as expected in this year's exams. So, to increase her chances of getting into ZJU, Lu applied for an early admission, in which the majors are limited to generally less favored subjects such as Japanese, Russian, oceanographic engineering, marine sciences and applied biological sciences.

Largely relying on her parents' suggestions, Lu applied to other universities and majors in cities which had direct flights or trains to her hometown of Wenzhou in southern Zhejiang province. Like many Chinese parents, they didn't want her to live too far away from home.

Gu Ruixuan, a sophomore at the South China University of Technology, says her major was switched from engineering to journalism by the university because her score was not high enough. Her original choice was based on the job market and advice from older relatives, due to the lack of career planning advice at her high school in Zhenjiang, Jiangsu province.

"Some people just filed for popular majors because they didn't know what to take. One of my friends is learning computer science now, but he is really interested in architecture," Lu says.

Chen Tao, who worked in Guangxi Zhuang autonomous region in recruitment for ZJU in 2016, when she was a graduate student at the university, says it takes time for students to work out their interests and which majors or universities to go for.

"They have a vague idea about the structure of majors at Chinese universities," Chen says, adding that her role was to help students identify their strengths based on their personal interests.

As Chinese universities now offer more minor and double-major courses, mechanisms for transferring majors and interdisciplinary curriculums, the choices they make right after the college entrance exams are now just the starting point.

After a year at university, Gu is enjoying her major and has finished her first journalism project, and still dreams of moving to Shanghai.