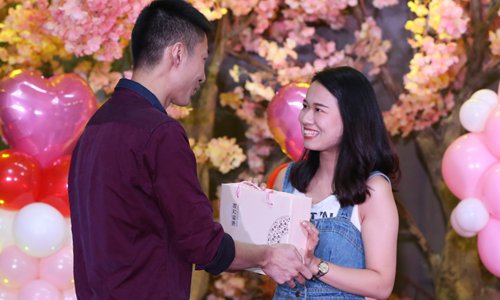 An overwhelming majority of Chinese single women regard buying a house as prerequisite for marriage, according to a survey published in August. Zhenai.com, a Shenzhen-based online matchmaking service provider, conducted a sample survey among its 140 million registered users, and published the survey results ahead of the Qixi festival, also known as the Chinese Valentine's Day, which fell on August 17 this year. The survey results indicate that nearly 80 percent of Chinese single women would not commit to a marriage unless the couple first buys a home, while only two fifths of their male counterparts share such opinion. Who is paying for the home? Almost half of the interviewees think it should be the obligation of the male spouse and his family, at least for the down payment, whereas only 17 percent consider it a common responsibility.The survey results also indicate the Chinese single community now tends to be more relaxed on the amount of the betrothal gift that customarily should be given to the bride's family, with 72 percent of them requesting something worth less than 100,000 yuan ($14,520).Central China's Henan Province and East China's Fujian Province have the highest requirements in terms of the tribute to the female's family in this category. Forty-eight percent of Chinese single people are willing to manage their wedding ceremony cost within 50,000 yuan, and over 80 percent maintain the cost should not surpass 100,000 yuan. However, only 0.05 percent of the interviewees think the bride's father should pay for the wedding services, and 30 percent say the couple should split the gift money collected during the ceremony, based on which side of the family it comes from.The survey also indicates that although three quarters of Chinese single people have to turn to their parents to take care of their children, only half of the males and a quarter of the females would like to live with their parents under the same roof. According to the survey results, 48 percent of the interviewees who are an only child would prefer their lifetime partner to also be an only, and only 32 percent don't think this is important.Housing scams Despite Chinese singles' general insistence on owning a home, housing prices remain largely unaffordable. And for many singles, even the cost for a rental in first-tier cities like Beijing and Shanghai has been rocketing lately. Rent in Beijing has been rapidly increasing this year, causing tremendous anxiety among the city's millions of tenants.The China Securities Journal cited data from a renting app, zhuge.com, that shows rent in the capital city has risen 25.8 percent, compared to last year, with July rent alone 4.3 percent higher on a monthly basis.Rent for a 50-square-meter one-bedroom apartment built in the 1980s in Xuanwumen, 2 kilometers from Tiananmen Square, is over 8,000 yuan ($1,164) a month, the journal reported. Earlier this year, the rent was 6,000 yuan per month, the journal said. The average monthly income in Beijing is 8,467 yuan, it said.Some social critics have claimed that real estate agencies and their shady anti-competitive practices have increased the market price. Zhang Zizhu, a social media author, published an article on Wednesday claiming that many agencies are taking out long-term loans in their tenants' names in the contracts without their customers knowledge, and using cash borrowed on the basis of their customers' credit profiles to buy up the rights for more rooms in the cities. Since they are using money borrowed by their customers, the agencies are not shy about being extra generous as they bid for available properties, thus driving up the overall rental costs in cities, read the article. The problem is that if agencies go bankrupt, only the landlords and tenants will be held accountable, the article said.  Wu Yang, a Shanghai resident, told the Global Times, "It is true that agencies are inclined to be quite ambiguous on the contract terms [if it is a loan contract with banking institute or with the landlord], unless you insist on explanation." Luo Na, a Beijing white collar worker who signed a three-year contract with an agency, said, "I was shocked when I found myself trapped in a three-year loan. If the agency goes bankrupt over these three years, I have to face the fact that I have no place to stay while having to pay the rest of the loan."To regulate the market, Beijing authorities on Wednesday launched a whistle-blowing hotline for the public, and total of 23 agencies including Ziroom had been exposed for having problems including forcing up rent prices and running businesses without a permit. According to a statement sent to the Global Times on Friday, the Beijing police also stepped up efforts to monitor and crack down on shady agencies. Police authorities have handled 39 cases related to agency scams this year, arresting 14 suspects.